Travers 2018: Before Wonder Gadot, there was Davona Dale 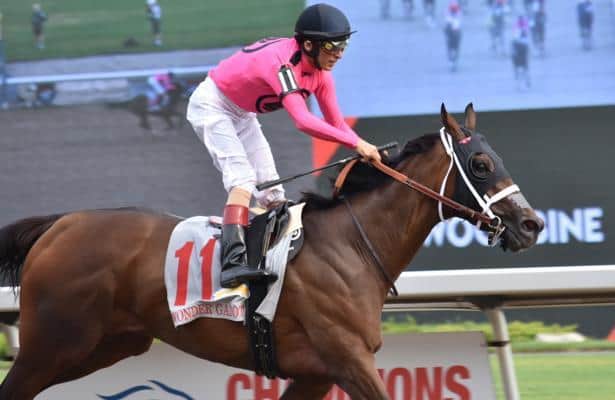 Wonder Gadot will take on a huge assignment on August 25 when she faces a full field of males in the Grade 1 Travers Stakes. As good as she's going right now, I can certainly understand why owner Gary Barber and trainer Mark Casse are excited about the opportunity to go after one of the most prestigious races in America, but still, the prospect of taking on Good Magic, Hofburg, Vino Rosso, Gronkowski, Tenfold, et al in Saratoga's Mid-Summer Derby is a daunting one.

Then again, taking a calculated shot is what this sport is all about.

I love when a really good, in-form female takes on the boys. In my lifetime, I've had the pleasure of seeing a different filly end a long drought in each leg of the Triple Crown.

In 1980, it was Genuine Risk winning the Kentucky Derby 65 years after Regret had turned the trick. For the Belmont Stakes, it took 102 years for a filly to match the feat of Tanya, as Rags to Riches broke through in a thriller over Curlin in the 2007 edition. Two years after that, the spectacular Rachel Alexandra could not be caught in the Preakness, 85 years after Nellie Morse had won the middle jewel for the distaff set. Fillies in the Travers have had no such recent luck.

Once a common occurrence, a filly winning the Travers has become more rare than sighting Halley's Comet. Culminating with Lady Rotha, who won by disqualification in 1915, seven fillies made it to the winner's circle in the biggest race at Saratoga during the early years. Doing the math, we have now seen 103 years go by since the last female winner of the Travers. Remarkably, one has not even been entered in nearly four decades.

The last filly to enter the Travers starting gate was Davona Dale back in 1979, and she was a good one.

As with Wonder Gadot, Davona Dale was a hickory filly who danced every dance. In fact, when Wonder Gadot runs in the Mid-Summer Derby in 12 days, it will mark her 14th career start, which is the exact number of starts it was for the daughter of Best Turn when she tried the boys 39 years ago.

A Calumet Farm homebred, Davona Dale had been a model of consistency for trainer John Veitch. After starting her career with two wins in four starts, the bay filly rattled off eight straight stakes victories in 1979. With the speed to lay close, and the power to kick clear, she won each of the Kentucky Oaks, Acorn, Mother Goose and Coaching Club American Oaks by daylight.

Her winning streak was halted when she ran second behind the talented It's in the Air at odds of 3-10 in the Alabama Stakes, the week before the Travers. Undaunted by the upset, and with a championship already secured, Veitch and Calumet went for the gusto by running their filly in the big one at the Spa.

Davona Dale entered the Travers with a lifetime record of: 13-10-2-0, and was sent off as the 5-2 favorite in a field of seven. While that edition of the Travers lacked a recuperating Spectacular Bid, it did include the Kentucky Derby runner-up General Assembly.

Unfortunately, for the chances of the last filly to run in the Travers, the son of Secretariat relished both the Saratoga main track, as well as the sloppy surface that day. The filly chased for a while, but nothing was going to stop General Assembly on that afternoon. He not only won by 15 lengths, but he broke the track record in the process. Davona Dale tired to finish in the middle of the pack, and a long way behind the winner.

Perhaps beginning to tail off in her form, Davona Dale was a Hall of Fame filly who ran into a freakish performance that summer afternoon at the Spa. No female has tried the Travers since ... until Wonder Gadot.

Unlike her female counterpart from 39 years earlier, it appears this daughter of Medaglia d'Oro is coming up to the race in career-best form. Her last two starts, with the addition of both blinkers and added distance, produced eye-catching victories in the first two legs of the Canadian Triple Crown.

Still, the big question remains: How will those impressive wins against Canadian-breds in the Queen's Plate and Prince of Wales stack up when she runs up against some of the most classy young males in the United States?

It is a daunting task, but certainly one with hope. She very well may fit with these males, and I applaud her connections for taking a shot. One thing is for sure: Wonder Gadot will be the most interesting and popular entry in this year's Travers Stakes. I wish her well.