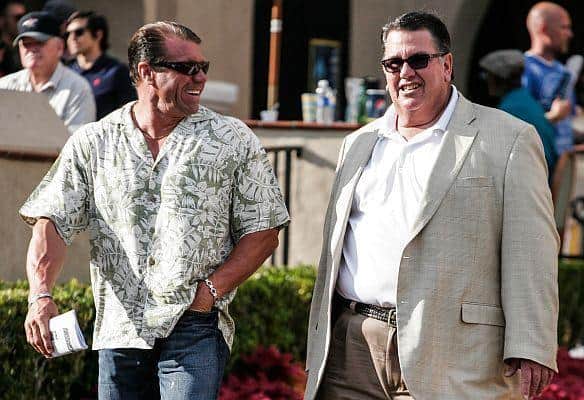 I’ve long considered him one of the finest turf trainers in the nation, and after today’s victory for Avanzare in the eighth race at Tampa Bay Downs, he is now also a member of the exclusive 1,000 victory fraternity. As usual, Proctor was humble in victory.

“Winning 1,000 to me is basically a credit to a lot of nice horses, good owners and the people who work for me and make good things happen,” said the 57-year-old trainer.

Proctor was not there to see it, as he was at home in California, but he enjoyed the milestone nonetheless. “It was nice to see Nicky and all the barn people in the winner’s circle, and it’s nice to win at Tampa Bay Downs,” said Proctor. “It’s been a good racetrack to me the last few years and it’s a special place.”

Nicky being his longtime assistant, Nicky Carillo, who has worked with Proctor for almost a quarter century. “He is the best thing that happened to me in my life,” said Carillo. “He treats everybody in the barn the same, but he has been like my dad.”

Today’s victory, not surprisingly came in a turf race, as Avanzare dominated by five lengths in the one-mile turf allowance. Sent off as the 7-10 choice, this could be another Proctor trained horse with a real future on the sod. Now 2-for-2, the four-year-old gelded son of Grand Reward broke his maiden nicely at first asking in a Churchill Downs maiden race back in November.

Among Proctor’s other current runners, he has recent Robert J. Frankel winner, Customer Base, as well as, the highly regarded young filly, Screen Goddess. The trio, and others, will try to fill a rather large void left by the recent retirement of perhaps the best horse Proctor has ever trained, in the two million dollar earner, Marketing Mix.

Like many of his best runners, Marketing Mix was owned by his longtime client, Glen Hill Farm, who teamed up with Proctor to surprise the Breeders’ Cup Distaff in 1994 with One Dreamer; a mare who was able to transfer her turf talent over to the Churchill Downs main track on that afternoon.

It’s nice to see good things happen to good people, and Tom Proctor is one of the good ones. Oh, and by the way, he’ll send out a two-pronged attack in tomorrow’s Grade 2 Monrovia Stakes at Santa Anita with Pontchatrain and Purim’s Dancer, on, you guessed it, the turf.