Toiling in vain no more, Improbable storms to BC Classic 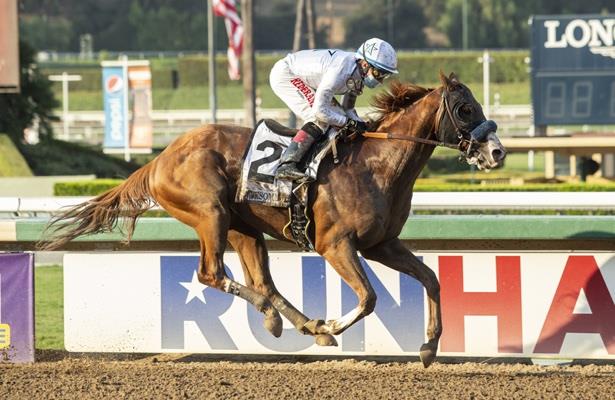 One year ago, when Improbable struggled home to a well beaten fifth-place finish in the Breeders’ Cup Dirt Mile, the comment line read, “Inside, toiled in vain.”

His post-race synopsis easily could have summed up the entire 2019 season for the handsome son of City Zip. So promising heading into his sophomore year, he seemed to be on the inside track to glory during the spring classics.

Despite losing narrow decisions in both his preps for the Kentucky Derby, the wagering public still had faith in the Bob Baffert-trained hotshot. Sent off as the favorite in each of the first two legs of last year’s Triple Crown, Improbable did little more than toil in vain, finishing out of the money in both the Derby and the Preakness.

His 1-for-7 season ended with more disappointment as he crossed the wire mid-pack in the Dirt Mile. Undefeated as a juvenile, the hotshot was no more. As the 2019 calendar came and went, Improbable went from as promising as any young 3-year-old to just another talented horse who seemed to be unable to live up to his potential.

For many, 2020 will be remembered as a year of heartache and disappointment. For Improbable, it’s been a resurrection.

He lost his seasonal debut this year, but the 4-year-old version of Improbable showed signs of what was to come when he made an explosive burst to the lead in the Oaklawn Mile. Tom’s d’Etat, an experienced veteran and one of the best horses in America, was able to run him down that day, but with a big performance from his far outside post, Improbable suddenly demonstrated glimpses of former potential.

You only need to look as far back as last year to see a horse turn it around and develop and mature into a Breeders’ Cup Classic winner and champion. Vino Rosso also was once high on Kentucky Derby rankings in 2018, but his two attempts in the Triple Crown that year were similarly lackluster.

Given another chance as an older horse, Vino Rosso made the most of his opportunity, finding his shining moment in front of the San Gabriel mountains at Santa Anita. For him, the corner was turned in last summer’s Hollywood Gold Cup. And so it was for Improbable.

Eight weeks after his strong return run in Arkansas, Improbable faced a very beatable field in the Hollywood Gold Cup (G1). Running like a horse with newfound confidence, the $200,000 yearling purchase dominated a field that he should beat, and he did so at the classic distance of 10 furlongs.

Once questioned for his distance capabilities, it was a race that we can now point to as the rebirth of Improbable. The young colt who had looked so good in winning the Street Sense and Los Alamitos Futurity (G1) as a juvenile was back. Bigger, stronger, and once again promising better things in his future as he had done nearly two years before.

If the Hollywood Gold Cup was the turning of the corner, the Grade 1 Whitney was the race for validation. The competition was far from the light bunch that he had just beaten at Santa Anita, but once again Improbable came home a decisive winner — this time against the likes of By My Standards, Tom’s d’Etat and Code of Honor.

From there it was back to Southern California for the Awesome Again (G1) and a new challenge in the form of last year’s champion 3-year-old Maximum Security. While his more accomplished stablemate was involved in a pace battle near the front end, Improbable showed a new dimension by relaxing early back in last place. As it turns out, it was a good place to be.

The electrifying move from last to first that carried him to an easy victory undoubtedly was Improbable’s most impressive race yet. He left a champion in his wake, and he likely will ride his winning wave all the way to favoritism in the Breeders’ Cup Classic. This year, that’s saying something.

Unlike Vino Rosso, who proved much the best in a less than stellar edition last year, Improbable is destined to face a salty bunch that includes the likes of Tom’s d’Etat, Maximum Security and By My Standards, as well as accomplished 3-year-olds Tiz the Law and Authentic.

Improbable will face his toughest test yet in the Classic, and he’s still not perfect, considering his starting gate high jinks, but there can be little doubt that he has completely turned things around in 2020. So much so that he is a deserving favorite for the Nov. 7 Breeders’ Cup Classic at Keeneland.