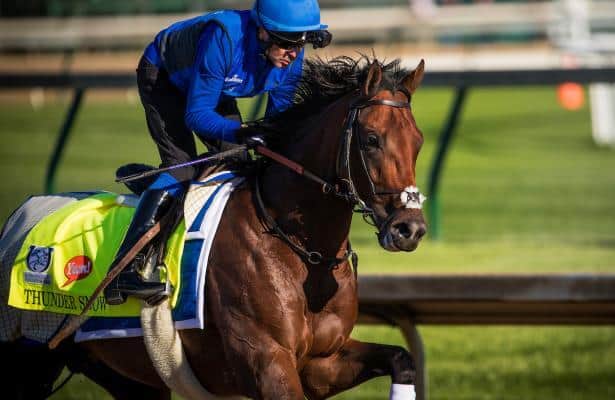 In the moments immediately following this year's Kentucky Derby, there was as much chatter among the patrons at Churchill Downs about Thunder Snow, as there was about the winner draped in roses, Always Dreaming.

"That horse needs to be in the rodeo, not the Derby."

Yes, for Thunder Snow, a journey to America for our most prestigious race turned into an epic failure. A side-show attraction, which effectively added a little comedy to the big race. Yet, Thunder Snow is much more than a rodeo clown on four legs. He is legitimately a globetrotting star. Despite his failure in Louisville, he is one of the most successful three-year-olds in the world.

Bred in Ireland, Thunder Snow is a result of the mating between a top Australian runner, Helmet, and the high class English broodmare, Eastern Joy. A very successful juvenile, he finished second in the Group 2 Vintage Stakes at Goodwood and the Group 2 Champagne Stakes at Doncaster, before traveling to France to score big in the Group 1 Criterium International at Saint-Cloud last October. His first season at the races, in which he won 2-of-6, was mere child's play, though, compared to what he has done so far in 2017.

It was last fall that Godolphin decided to point their young star to the Kentucky Derby. With that goal in mind, Thunder Snow wintered in Dubai. There he proved to be the dominant sophomore on the grounds, scoring strong victories in both the UAE 2000 Guineas and the $2 million UAE Derby.

Seemingly as well prepared as any horse coming to the Kentucky Derby from Dubai, things went decidedly haywire soon after breaking from the Churchill Downs starting gate. Would the talented Thunder Snow go down as a freaky side note of Kentucky Derby lore, never to be heard of again? The answer has been a resounding, No.

Surely having done little running in the Derby itself, the Saeed bin Suroor trained bay returned to Europe ready to run. In fact, he has already run three times since the first Saturday in May. Each has come in a different nation, and each has come in Group 1 company.

First came the important and prestigious Irish 2000 Guineas at The Curragh on May 27. There he faced perhaps the top sophomore in Europe. While Thunder Snow entered the race off his strange trip to America, Churchill was coming off a perfect result in winning the Group 1 English 2000 Guineas at Newmarket. The Godolphin runner could not quicken with Churchill on this afternoon in Ireland, but he proved the only one to give the big favorite a run.

Leaving Ireland, Thunder Snow next made his way to Royal Ascot for a run in the Group 1 St James’s Palace Stakes, to be one of the headliners in a loaded field. He again ran big, and this time he actually got the best of Churchill, but again came up a little short, this time to another of the world's best three-year-olds, Barney Roy.

The three-race losing streak came to an end today. Granted it was only a five-horse field that quickly became four, but Thunder Snow earned his second Group 1 win of his career in the Prix Jean Prat at Chantilly. Holding off a strong late charge by Trais Fluors, the son of Helmet was beautifully handled by Christophe Soumillon in winning for the fifth time in 12 lifetime starts.

Having raced in top company on both turf and dirt, and in five different countries in his last five starts, the compelling story of Thunder Snow continues to unfold. So much more than that bucking bronc who refused to run on a wet track in front of the huge Derby Day crowd, he has once again proven himself a runner to be reckoned with on a world stage, and one to watch for months to come.