This Week in Racing: Reflecting on Send It In, Conquest Tsunami 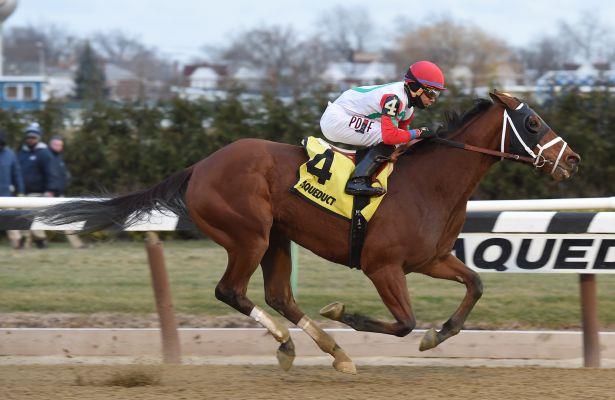 Follow horse racing for any amount of time and you are bound to be affected on a deeply emotional level. The highs of racing can make anyone with a beating heart buckle at the knees, causing them to spend a lifetime looking to repeat that amazing feeling as many times as possible. Conversely, the lows of racing are among the deepest in the abyss of dark emotions. Good and bad does not quite cover the polar opposites found in racing. The best racing of this past week took place on Saturday, and through the respective fortunes of a pair of 6-year-old geldings, Send It In and Conquest Tsunami, we saw and felt it all.

Send It In was a nice horse, a very nice horse. I know how I felt watching tragedy unfold on the far turn of Gulfstream Park, but I cannot fathom the heartbreak it had to be for anyone connected to the horse.

Making a menacing move in the Grade 3 Hal's Hope, just as he had done so many times before, the gelded son of Big Brown suddenly began to lose ground to the talented runner to his inside, Irish War Cry. Before you could worry that this was not going to be his day, he was gone. You could tell immediately when the homebred of Paul Pompa Jr. had broke down, that it was bad. Thankfully, Hall of Fame jockey, John Velazquez, escaped uninjured, but for the majestic steed he was on in this feature race -- well, he was not so lucky.

Trained by Todd Pletcher, Send It In was an easy horse to like. The New York-bred runner was consistent as the day is long. The Hal's Hope was his 18th time to enter the starting gate on race day, and on nine of those occasions, he was greeted warmly in the winner's circle by his happy connections. He was also a horse who improved his entire career.

Once upon a time a claimer, Send It In kept getting better and better. On New Year's Eve of 2016, he won his first stakes race, romping home in the Alex M. Robb Stakes against fellow competitors bred in the Empire State. Proving that was no fluke, he rattled off two more strong performances, gamely winning the Haynesfield Stakes, before closing like a rocket to finish third in the Stymie.

While we are now left with only memories, and to wish him a peaceful rest, it was in his next race, in which I choose to remember Send It In. Showing all the heart and the ability of a very good horse, he ran the race of life in last spring's Grade 3 Excelsior Stakes.

While the fatal injury of Send It In cast a somber shadow on what should have been a great day of racing, something happened out west to rekindle our hope and faith in racing.

It wasn't that long ago that Conquest Tsunami was presumed dead in the terrible fire at San Luis Rey Downs. Thankfully, and perhaps miraculously, he was not lost.

In a case of mistaken identity within the devastation, the best news of all came when we found out Conquest Tsunami had in fact survived the fire. Everything from here on is gravy, and it looks like the son of Stormy Atlantic is going to make the most of his rebirth.

After a stylish win to begin the season, the Gary Barber-owned Conquest Tsunami took things to a new level. Taking command of the Grade 3 Daytona Stakes early on, the now-Peter Miller trained charge dominated good horses throughout on the way to a powerful 2 1/2-length victory in the 6 1/2-furlong grass test.

In fact, those good horses in which he was running away from down the lane, Stormy Liberal and Calculator, are also from the Peter Miller barn, and are proven top turf sprinters. Throwing down splits of :21.99, :44.09, and 1:06.14 along the way, no horse was going to catch Conquest Tsunami on this day, as he completed the downhill course in a sparkling 1:12.03.

In this performance, a horse thought lost in a horrific natural disaster just a few months ago, has quickly risen to be one of the nation's top turf sprinters. ZATT's Star of the Week is ... Conquest Tsunami!

While the real story of the Hal's Hope for me has already been told, the feature at Gulfstream Park did go on, and produced a solid stretch drive between two horses who could have strong years in 2018.

Klaravich Stables and William Lawrence's Economic Model turned the tables on a very disappointing 2017 season by turning away Irish War Cry to win the Grade 3 affair. A stakes winner at 3, the son of Flatter ran a big race to rally for second to the eventual Sprint Champion, Drefong, in the Grade 1 King's Bishop deep into the summer of 2016. Unfortunately, Economic Model did not visit the winner's circle again until his final start of the season last year with an allowance score. Perhaps that confidence was all he needed, as he looked good on Saturday in securing his first graded stakes victory.

As for Irish War Cry, the winner of the Holy Bull and the Wood Memorial did little to dampen the enthusiasm for his upcoming season with this runner-up finish. Making his first start in five months, the son of two-time Horse of the Year Curlin came back with a fine effort that should move him forward. The Belmont Stakes' second-place finisher made a nice move on the turn, and only succumbed late to a horse who was likely a little more cranked up for this one. I look for Irish War Cry to add more graded stakes victories to his resume in 2018.