This Week in Racing: Enable dominates in the Arc 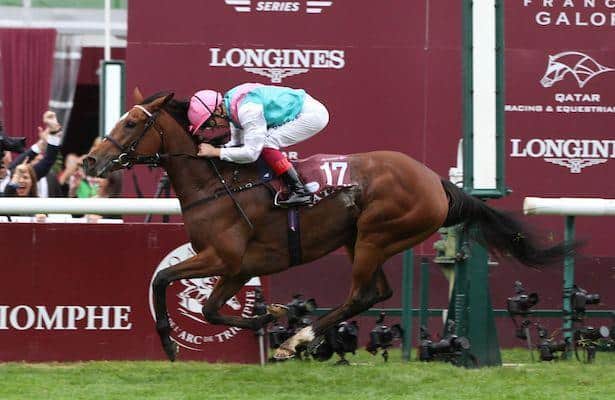 We now officially have an early favorite for the 2018 Kentucky Derby. His name is Bolt d'Oro. Undefeated in two starts going into the Grade 1 FrontRunner at Santa Anita, we all knew that the son of Medaglia d'Oro was the horse to beat, but I think few of us expected to see the type of performance that the Mick Ruis-trained colt turned in on Saturday. Showing strong tactical speed in his first try around two-turns, the $630,000 yearling purchase blew the doors off his competition down the lane in this year's most important prep for the Breeders' Cup Juvenile. The victory was so impressive, that Bolt d'Oro now figures to be one of the shortest priced favorites at Del Mar for the World Championships. Now proven at different tracks, sprinting, and stretching out, he has the ability to win races with different running styles. Best of all, his breeding truly suggests that ten furlongs will be well within his scope. Bottom line, he looks the part, not only of a Breeders' Cup winner, but as a heavy winterbook choice for next spring's Run for the Roses.

The return of Mubtaahij added some much needed spice to a rather bland edition of the Awesome Again. Making his first start since running fourth in the Dubai World Cup six months earlier, the Irish-bred veteran proved best in Saturday's Grade 1 Awesome Again Stakes at Santa Anita. Always a horse of class, it's hard to believe that the now Bob Baffert-trained son of Dubawi had not won a race since romping in the UAE Derby some 2 1/2-years ago. Often knocking on the door, it was good to see the five-year-old finally break through again, and in a Grade 1. Having said all this, I am not going to be jumping on the bandwagon of Mubtaahij as a potential winner of the Breeders' Cup Classic, where the competition will be much, much stronger. Speaking of European-bred horses, the big one in France was run on Sunday.

Enable has established herself as Europe's best three-year-old filly. Matter of fact, she has proven herself as the best of all of Europe, and it isn't even close. A relative unknown commodity just five months ago, Enable has gone on a string of victories that will be remembered for years to come. Easy wins in the Epsom Oaks and the Irish Oaks announced the daughter of Nathaniel as the powerhouse of her division, but a decisive score over top older male rivals in the King George VI and Queen Elizabeth Stakes, pushed the English-bred filly to stardom. She followed that up with a facile score in the Yorkshire Oaks against females before making the trek across the channel for yesterday's Prix de l'Arc de Triomphe. The world's biggest turf race attracted a full field of strong runners, but the young filly was simply too much. Frankie Dettori becoming the only jockey with five Arc wins was surely a part of the story, but the John Gosden-trained Enable was the true star. It was poetry in motion, and it makes you wonder why American females don't get more chances in our biggest races. Enable is ZATT's Star of the Week.

Back stateside, Elate is the best three-year-old filly in the country. Granted the Grade 1 Beldame did not attract a powerful group of olders, but what the daughter of Medaglia d'Oro did in her first try outside of her own foal crop was awesome. In real danger of being stopped at a key juncture of the race, rider Jose Ortiz showed tremendous confidence in his mount. She never found much room, but when a tiny hole opened early in the stretch, the race was over in a matter of seconds. Elate burst through like she was late for dinner, and wrecked her competition with ridiculous ease. She should have won the CCA Oaks, and now her Alabama and Beldame were huge. Abel Tasman, the winner of three consecutive Grade 1 races, before running second in the recent Cotillion, is still the leader of the division, but I truly believe Elate is the better filly right now. Stay tuned for the Breeders' Cup Distaff, where Elate should have the chance to see what she can do against the best older females in the nation, in Stellar Wind and Forever Unbridled. Throw in a resurgent Paradise Woods, who also won in fine fashion on Saturday, and you have the makings of another entertaining Distaff. They will be tough, but as good as Elate is getting, she will have a shot to end 2017 on championship clinching roll.

Before Enable flashed her brilliance on Sunday, Beach Patrol was poised to collect on the ZATT's Star of the Week honor. His romp in the Joe Hirsch Turf Classic was comprehensive, and the best performance of his career. After winning the Grade 1 Secretariat, the Chad Brown turfer was winless in six consecutive starts. Beach Patrol was always right there, but could not break through. That all changed recently with a brave win in the Arlington Million. Sometimes, all a horse needs is a little confidence. With the seal broken, he quickly moved himself to the top of America's male turf class with a demolition of a deep cast Saturday at Belmont. The three-year-old Oscar Performance tried hard, but it was all Beach Patrol in this one. A similar performace in the Breeders' Cup Turf, and he could defend the hometeam's honor at Del Mar.

While all eyes were on the big days respectively at Belmont Park and Santa Anita, please do not sleep on what happened in my neck of the woods. Mr. Misunderstood is no national star, but with his easy score in the Jefferson Cup Saturday at Churchill Downs, the Archarcharch gelding is a perfect 6-for-6 on turf. Tougher tests await the Brad Cox trainee. Another with little national recognition is Honorable Duty. He was no match for Gun Runner back in June, but the five-year-old son of Distorted Humor is becoming a force in his own right. His big win in the Lukas Classic was his fourth stakes victory in his last six starts, with two seconds. Even if he is not yet a threat to the absolute best, consistency like that should be talked about. Finally, one of the best sprinters in the nation uncoiled his late run to methodically wear down the game local in the one-turn Ack Ack. It was a strong performance by both Awesome Slew and The Player, and a race that should set up both well for the rest of 2017.

Looking forward to next week, I'm actually really looking forward to the Jockey Club Gold Cup. Sure, the once great race is not what it once was, but I am intrigued by a few horses in this field. Keen Ice and Pavel are polar opposites in many ways, but both represent interesting entries on Saturday, and moving forward. The former is extremely battle tested. The 2015 Travers upsetter was third in the Breeders' Cup Classic last year, and seems to be going good right now for trainer, Todd Pletcher. Last time, he had no chance to run down Gun Runner at nine furlongs, but his second in the Whitney was as good as you would hope. Before that, he rolled down the Belmont lane to prove best in the ten furlong Suburban. Same track, same trip in the Gold Cup, and you'd have to think he is the one to beat. Pavel, on the other hand, has only run three times in his career. The progress and sizzle he has shown in those three races has me wondering if the son of Creative Cause might be something special. In Keen Ice, and the rest in the Jockey Club Gold Cup, his connections have found another real test for their inexperienced talent. There are other capable horses in the field, but it is the meeting of these two contrasting horses that I cannot wait to see.