Zipse: A tale of 2 editions of the Cigar Mile 10 years apart 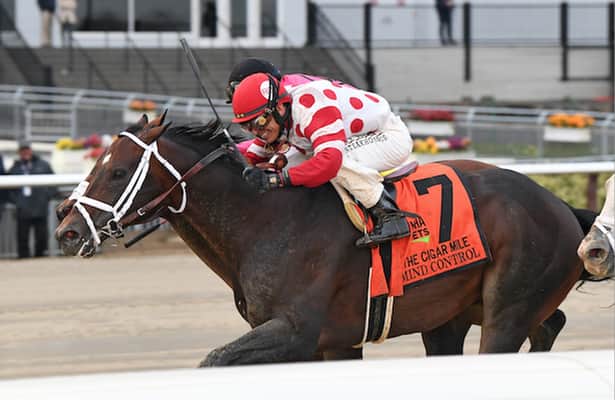 Some race results sting. I’m not talking about the sadness of a horse being tragically injured, but rather the disappointment of seeing a horse you love go down to defeat in heartbreaking fashion. Ten years removed from such a loss for me, I’ve come full circle with a thrilling win by Mind Control in the Cigar Mile (G1).

Groupie Doll was one of my favorites. I followed the daughter of Bowman’s Band from the beginning of her career in Kentucky and was thrilled when the chestnut filly with a small white star developed into one of the best sprinters of the 21st century.

A high point in her career came near the end of her 4-year-old season when she romped home a winner in the Breeders’ Cup Filly & Mare Sprint (G1).

It was her first of two victories at the Breeders' Cup, and it was more than enough to wrap up her first of two Eclipse Awards. I was in the stands that afternoon at Santa Anita, and for me it was one of those happy results that you always cherish.

Never ones to rest on their laurels, the father-son team of Fred and Buff Bradley decided to bring the soon-to-be champion filly East for one final huge test to end her season. They not only were the owners of Groupie Doll, but they also bred her, raised her, and the younger Bradley was the trainer. Her homegrown roots and smaller operation connections were one of the many reasons I loved her so much.

I knew the 2012 Cigar Mile (G1) against the boys was not going to be easy, but riding high with five straight impressive, graded stakes wins, I was all in on her chances to add this Grade 1 to her growing resume.

In her ninth and final race of her second season on the racetrack, Groupie Doll brought her best to Aqueduct that afternoon, but the final yards of that one-mile trip were her undoing.

The head-bobbing, narrow-as-could-be loss is painful to watch, but now 10 years removed, I realize it is further proof of what a fine racehorse Groupie Doll was. There were numerous victorious highlights before and after for her, but my heart still aches just a bit that she didn’t get this one too.

The villain (in my biased eyes) that day was a horse named Stay Thirsty. A 4-year-old son of Bernardini trained by Todd Pletcher, he had won the Gotham (G3), Jim Dandy (G1) and Travers (G1) the year before but hadn’t connected yet at 4.

A strong second in the Jockey Club Gold Cup (G1) in his previous race demonstrated he was ready to run his best in his swan song. Unfortunately, it came at the expense of Groupie Doll.

Ten years later, and Saturday we saw a brave and courageous son of Stay Thirsty, also trained by Pletcher, using the Cigar Mile as the end statement of a very nice career.

It’s only fitting that Mind Control would earn one of the biggest victories in his career in the fashion that he did. A horse who never shied away from a battle to the wire, he simply deserved the Grade 1 victory more than Get Her Number, White Abarrio and Zandon.

A decade after his daddy went out a winner in the Cigar Mile, Mind Control did the same. He won by a few inches more than Stay Thirsty did, and he was more in the role of Groupie Doll, refusing to yield on the inside, but the result was fitting.

It was also a perfect way for the son of Stay Thirsty to close out a very successful career.

The irony of it all is not lost on me. The Cigar Mile of 2012 is a race I will never forget, and now so is the 2022 edition, and this time I was rooting for the winner. Well done, Mind Control.