The saga of one-eyed Mighty Heart continues in Dominion Day 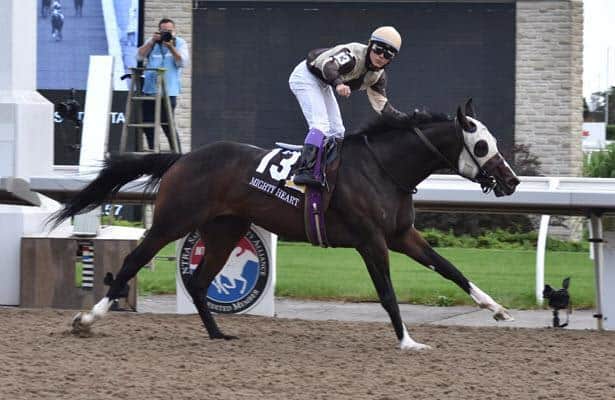 Perhaps someday there will be a book written about him, but for now we can continue to enjoy the unfolding saga that is Mighty Heart.

His story will take a new turn on Canada Day (Thursday) as the nation’s reigning Horse of the Year will make a most popular return to the place where he became a star, when he headlines the field for the Dominion Day Stakes (G3) at Woodbine.

It was less than 10 months ago when the smallish son of Dramedy ran into the hearts and imaginations of North American racing fans with a sensational victory in the historic Queen’s Plate.

In running off with Canada’s version of the Kentucky Derby by more than seven lengths in one of the fastest times in the race’s history, Mighty Heart became an instant equine hero. A hero with only one eye.

Nobody knows exactly how it happened, but he lost the eye when he was only 2 weeks old. Returning from his farm paddock, he came back with an injury so severe that the eye could not be saved.

In addition to the early mishap, Mighty Heart comes from a relatively modest pedigree. Bred and owned by Larry Cordes, his sire was a stakes-winning son of Distorted Humor, but one who won only 4 of 18 starts. Not a hot commodity early on at stud, Dramedy was moved to Oklahoma and then to Saudi Arabia.

His dam, meanwhile, never lost on the racetrack, but the interestingly named Emma’s Bullseye, a daughter of City Place, raced only once, and that came in a maiden claiming event at Woodbine.

But no one told the bay colt with a white blaze and three white socks that he was not supposed to be something special on the race track.

Trained by one of Canada’s best, Josie Carroll, Mighty Heart was unraced at 2. He made his debut last February in a maiden special weight at Fair Grounds in a race that originally was scheduled for the turf. He ran like a horse with only one eye.

Lugging out badly in his first two starts down in New Orleans, one on dirt and one on turf, Mighty Heart looked anything but a horse on a fast track to stardom.

Given a little more time because of the COVID-delayed opening of Woodbine, we finally began to see what he could become in his third lifetime start.

Making himself right at home on Woodbine's all-weather main track, Mighty Heart impressively won the July maiden race by better than four lengths. A promising allowance race, in which he rallied to take the lead before succumbing in the stretch, came three weeks later. It was enough to give the Sept. 12 Queen’s Plate a try.

Sent off at odds of 13-1 in Canada’s most famous race, the small, modestly bred, one-eyed horse made the most of his opportunity. The front-running performance was a tour de force.

Proving that his dominant performance on the synthetic track at Woodbine was no fluke, he earned his third career victory 17 days later.

The occasion was the Prince of Wales Stakes at Fort Erie, the second leg of the Canadian Triple Crown. As good as he had been on Woodbine’s main track, he now would have to validate the huge victory on a traditional dirt track.

Favored this time, and not a part of the early pace, Mighty Heart found room as the field turned into the stretch under rider Daisuke Fukumoto and pulled away for a decisive and popular victory.

Unfortunately, a second try at turf racing, and an attempt to become the first horse to sweep Canada’s Triple Crown in 17 years, ended with a tiring Mighty Heart fading to seventh. Still, the two big wins in the first two legs were enough to award the Cinderella story horse with Canadian racing’s biggest year-end honor.

Given plenty of time off, Carroll brought back the Canadian star in a very tough allowance race at Keeneland in April. Making his first start as an older horse, he set all the pace before yielding late to the American stakes winner South Bend.

In his next start, he displayed a mighty heart in fighting back to win a three-horse photo in the Blame Stakes at Churchill Downs over a graded-stakes-quality field. It would seem that the story of Mighty Heart is far from finished.

On Thursday, he will return to the races at Woodbine a national hero and a horse who has beaten all the odds to become a champion. I don't know about you, but I find it impossible not to root for Mighty Heart.