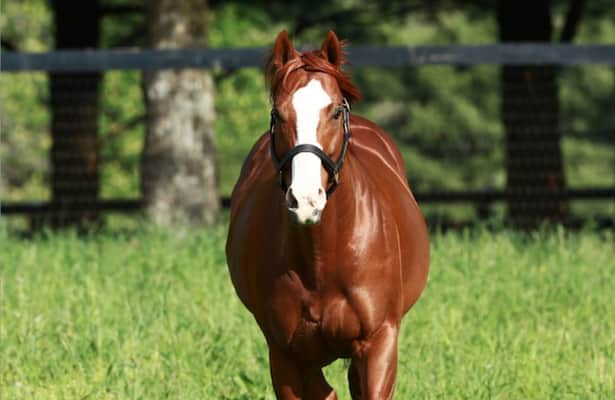 One of the most significant increases of a stallion fee in 2022 came when Coolmore America announced that Munnings would stand for $85,000 this year. The 16-year-old son of Speightstown jumped to the lofty price tag from $40,000 in 2021. If the results of New Year’s Day are any indication of what is to come, he might still be a bargain.

The chestnut stallion’s day got off to a fast start in Dubai when Shahama scored in the UAE 1000 Guineas Trial. Several hours later back in the U.S, he added two new stakes winners with Sir Alfred James winning the $100,000 Holiday Cheer Stakes at Turfway Park and Dash Attack taking home the $250,000 Smarty Jones Stakes at Oaklawn Park.

[Dash Attack powers to victory in the Smarty Jones for McPeek]

On a day when four major 3-year-old dirt stakes were run across the country, Dash Attack was one of the biggest stars. With 14 horses signed on for the Smarty Jones, the rail draw was no treat for the Kenny McPeek-trained son of Munnings, but he overcame all traffic on the way to an impressive win that announced him as one to watch on the 2022 Kentucky Derby trail.

Sporting a big white blaze like his sire, Dash Attack did not break sharply in the one-mile affair before taking a place in mid-pack under rider David Cohen. With a two-horse duel unfolding in front of him, he inched nearer the lead on the far turn but still had a wall of horses to deal with ahead of him. Swinging quickly to the outside, Dash Attack found clear running room on the outside and powerfully took command in mid-stretch on his way to a decisive come-from-behind victory.

It was the second win in as many starts for Dash Attack, having rallied to win his debut, also at Oaklawn Park, four weeks earlier. Out of the Hard Spun mare Cerce Cay, he joins the undefeated Jack Christopher as top Kentucky Derby prospects for their sire.

If Dash Attack was the most promising offspring of Munnings to run Saturday in America, it might be Shahama who can claim that mantle on a global stage.

A dominant nine-length winner of her debut at Meydan on Dec. 9, the half-sister to the two-time champion Lookin at Lucky had a much more daunting task on Saturday. She proved up to the challenge. Overcoming a difficult trip, she powered home late to win the UAE 1000 Guineas Trial going away, and now becomes a leading contender for next month’s UAE Oaks (G3).

Finally, the New Year's Day stakes bonanza for Munnings was completed by Sir Alfred James. He is neither undefeated nor a classics contender like his younger siblings, but the 6-year-old gelding is becoming a very nice sprinter in Kentucky.

A half-brother to the Breeders’ Cup Mile winner, Got Stormy, the Norman Cash-trained runner scored his first career stakes win Saturday, winning the Holiday Cheer by more than six lengths while completing the 6 furlongs in 1:08.53.

A $10,000 stallion for many of his early years at stud, Munnings did not always get top broodmares, but it’s clear that he has become one of the nation’s top sires. Standing 16.1 hands tall, and as a son and grandson of the highly successful duo of Speightstown and Gone West, he is now more popular than ever with breeders.

As a runner, he was quite successful. He won three Grade 2 stakes, including the Woody Stephens, which has since moved to Grade 1 status. He also was third in the 9-furlong Haskell (G1) behind the champions Rachel Alexandra and Summer Bird. Munnings won 4 of 14 career starts, racing consistently in graded stakes, before retiring to Ashford Stud after his 4-year-old season.

Besides his trio of highly promising and undefeated young sophomores, Jack Christopher, Dash Attack and Shahama, he also is the sire of recent Starlet (G1) winner Eda, as well as one of the top current horses in Canada, Munnyfor Ro.

Already the sire of standouts such as I’m A Chatterbox, Om, Bonny South, Finite, Kimari, Ginobili, Venetian Harbor and Warrior’s Charge, it’s easy to see why Munnings has seen his stud fee skyrocket in recent years. No. 7 on the American sire list in 2021, he looks ready to rise even higher in 2022.