The Pegasus World Cup is … 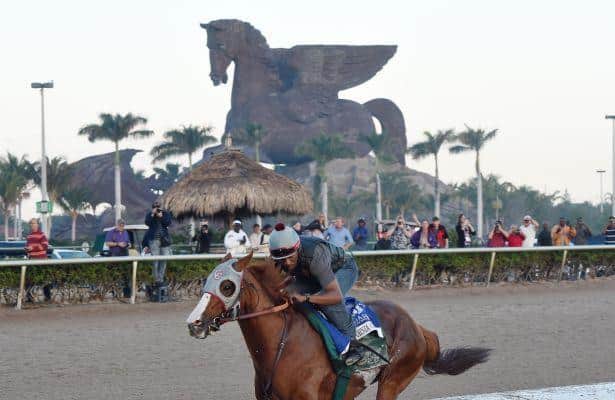 A $12 million race in January, funded by a dozen investors, each willing to put up a cool million for a spot in the starting gate … Who would have believed such a thing was possible just a short time ago? A bold idea to be sure, but will the Pegasus World Cup be a smashing success, or will it soon be a ‘remember when Gulfstream Park tried that $12 million-dollar race?’ and little more than a footnote in American racing history? The ultimate answer make take years to come, but for now, just days away from the first edition, what do we think so far?

The Pegasus World Cup is a success because in its very first year, it has attracted the two highest rated horses in the world, Arrogate and California Chrome. Before the Pegasus came along, we never would have seen a rematch after their excellent Breeders’ Cup Classic.

The Pegasus World Cup is a failure because the race is hopelessly top heavy. After the top two, the race appears to be hardly of Grade 1 material, with the third choice, Keen Ice, sporting a 2-for-19 lifetime record.

The Pegasus World Cup is a success because the 12 spots, at one million each, were filled quickly, demonstrating a real willingness, and eagerness, of owners to step up and embrace the initiative. If the demand is there, the race is bound to be around for a while.

The Pegasus World Cup is a failure because there is no true advantage between finishing fourth, or twelfth and last. Called an invitational, the lack of distinction between running a very good race, versus a jog around the track, would seem to invite horses of inferior class and ability, as they get the exact same reward as much better horses. It is perhaps a dangerous precedent, and creates potential issues for superfecta bettors.

The Pegasus World Cup is a success because more people are talking about racing in December and January than in anytime in modern racing in America. There can be no doubt that it has brought an exciting new energy to winter racing.

The Pegasus World Cup is a failure because it fragments the racing season. Already long enough, the racing season is currently focused on the spring, summer, and fall. What will it mean for the rest of the season, and participation in traditionally important races throughout the year, after such a rich race in the middle of winter?

The Pegasus World Cup is a success because, in an industry often lacking in big and forward thinking, it is a powerful symbol for attempting both.

The Pegasus World Cup is a failure because fans hoping to attend the big day of racing are being gouged by prices of parking, general admission, and seats, effectively turning away many casual fans, as well as loyal fans who simply cannot afford the high prices.

The Pegasus World Cup is a success because it brings about a needed boost in excitement and opportunity for older horses, thereby combating the problem of seeing our stars ushered off to stud too quickly.