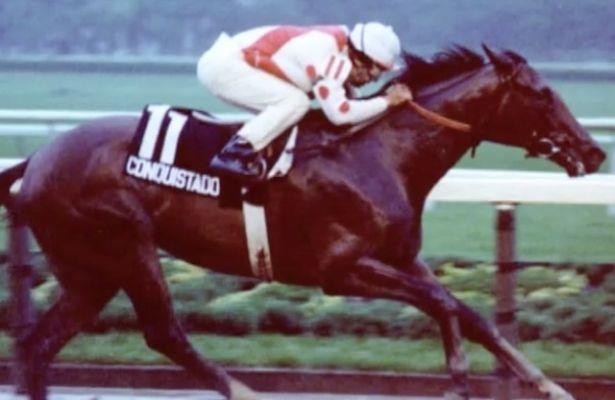 I’m not sure that any horse enjoyed a better week of racing than did Conquistador Cielo back in the late spring of 1982. A lightly raced graded stakes winning colt at two, the son of top sire, Mr. Prospector, accomplished something at three that likely will never be seen again.

After a minor setback prevented the previous year’s Saratoga Special winner from taking a run at the Kentucky Derby, it was clear that he was putting it all together in May of his sophomore season. After a sharp allowance win at Pimlico, he came back 11 days later to face an allowance field of older horses at Belmont. The 11-length demolition of that bunch was enough for his veteran trainer, Woody Stephens, to quickly move his colt up to bigger and better things.

Just 12 days after dominating the allowance race, he came back at the same one-mile distance for the prestigious Metropolitan Handicap. The Grade 1 race at Belmont Park attracted a full field of 14 mostly older horses, but it was the young rising star that bettors made the 2-1 favorite. Breaking from the 11-hole under Eddie Maple, Conquistador Cielo pressed the pace of the Met Mile through strong early fractions of :22.80 and :45.00. By the time he had hit six furlongs in 1:09 flat, the favorite had put away a nice older horse in Pass The Tab, and was setting sail for the last demanding quarter mile of one of America’s best races.

After the fast fractions, and contested pace, many horses would have wilted late; not Conquistador Cielo. He kept going, widening his advantage as he went. His fluid stride was a thing of a beauty, as he responded with a second straight 24-second quarter. A top handicap horse, Silver Buck was able to make up ground on the rest of the field, but not on the talented youngster. The Henryk DeKwiatkowski owned runner stamped himself a burgeoning superstar with a 7 ¼-length victory in a track record time of 1:33 flat. On a track that was not playing overly fast, it remains one of the greatest performances in the history of the historic race.

The Met Mile tour de force, in and of itself, was something special, but the Memorial Day blitz was just the beginning of the Florida-bred bay’s amazing week. At first, the plan was not to wheel back in the final leg of the Triple Crown, but doing so well, Stephens quickly changed his mind, and decided to run Conquistador Cielo five days later to face the Kentucky Derby winner, Gato Del Sol, the Preakness winner, Aloma’s Ruler, and eight others in the 1982 Belmont Stakes.

The sloppy track did not hurt his trainer’s decision, but coming on the heels of his huge Met Mile just five days earlier, the Belmont result was nothing short of remarkable. Laffit Pincay, Jr. picked up the mount for Eddie Maple, who suffered an injury the day before the Belmont. Check out the wide run into the first turn for the pair. From there, it was nothing but easy for Conquistador Cielo, who had just set the one-mile track record earlier that same week in the Met Mile.