The Medal Count of Transylvania 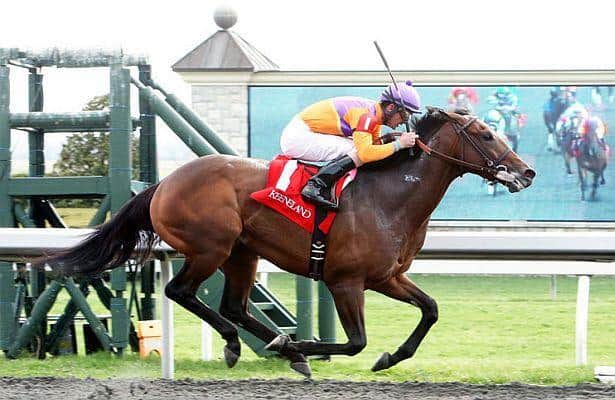 Much like the son of Dracul himself, Medal Count ruled his kingdom with an iron fist. A rail-skimming trip didn’t hurt either, as the son of Dynaformer skipped his way to an easier than the final margin would suggest 1 ¼-length score. The occasion was the 26th running of the $100,000 Transylvania today at Keeneland. The Grade 3, originally scheduled for turf, was instead run over the Polytrack due to the heavy rains of last night into this morning. As the feature of the opening-day program, Medal Count becomes the first stakes winner of Keeneland’s always anticipated Spring Meet.

Despite being tabbed at 12-1 on the morning line, Medal Count was well backed by astute horseplayers, and was sent off as the second choice in the field of eight. Breaking from the rail under Robby Albarado, the bay colt stayed to the inside as he dropped back near the tail of the field into Keeneland’s first turn. He made an early move on the backstretch to get close to the leaders, but looked like he might be lacking for room as the field hit the far turn.

Full of run nearing the stretch, a hole developed just big enough for horse and rider to squeeze through, and the pair took full advantage. His main competition at that point, Picozza, could not stay with him midway through the stretch, and was just able to fend off Woodfield Springs for the place money, as Medal Count coasted to the wire. The winner returned $8.00 to his happy backers, and covered the 1 1/16 miles in 1:43.35

In winning for the third time in six lifetime starts, the Spendthrift Farm color bearer earned his first stakes victory. Always well liked by his connections, Medal Count was plucked out of the 2012 Keeneland September yearling for $360,000. A romping debut winner at Ellis Park, he now holds the distinction of having a win on dirt, turf, and synthetics, having also scored two starts back with a late rush to get his nose down in unison with another in a seven furlong allowance turf race at Gulfstream Park. Most recently, the Dale Romans charge finished 5th of 12 in the Grade 2 Fountain of Youth.

Romans was obviously pleased with the colt that he’s always held high hopes for. “He’s the real deal. I’ve said it all along,” said Romans. “He’s done everything we wanted him to do. This performance kinda put everything together.”

It’s always nice when the confidence is rewarded, as it was today for Romans. As far as future plans, it remains to be seen whether Medal Count will try to make a play for the Derby, or go back to grass, as was originally planned this afternoon.

“That’ll be up to Mr. Hughes (owner of Spendthrift Farm). If he were mine, I’d still have him on the (Kentucky) Derby (G1) trail, but he wanted to take a more conservative approach and let him grow up a little bit. Today was a big performance and showed he can go anywhere.”

Either way, it looks like we are just tapping the surface of the potential of a very talented, and maturing young colt.