The Hall of Fame awaits California Chrome and Beholder 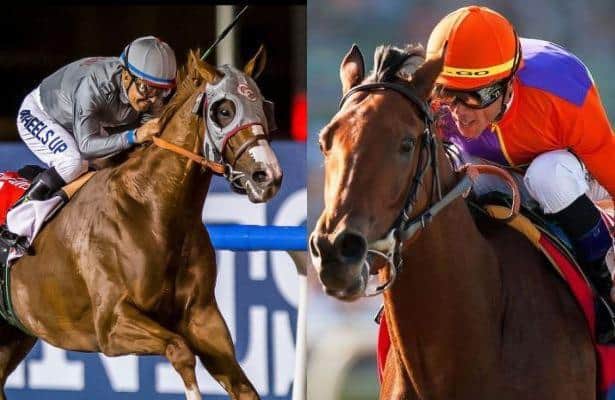 This year was a big one for Racing’s Hall of Fame. As two of the most popular horses of this century, it was a special moment for countless to see Rachel Alexandra and Zenyatta gallop into the Hall together. Horse racing’s greatest honor is only bestowed upon the very best, and those two contemporaries certainly fit the bill. Somehow, though, they never raced each other, which happens to be the perfect segue to this week’s big event.

No matter what happens in the Showdown at Del Mar, the result of the 2016 Pacific Classic will have no bearing on the ultimate entry of both California Chrome and Beholder into the Hall of Fame. They will each be ushered into the Hall five years after their career on the racetrack ends. I say five years, because that is the minimum waiting period for entry following retirement. Of course, winning the big race on Saturday would be another big feather in either great horse’s cap, but a loss would clearly take nothing away from all that they have already achieved.

With all due respect to the 2014 Horse of the Year, let’s take this, ladies first. Beholder is the defending champion of the Pacific Classic. Last year, she became the first female to ever to win the million-dollar race. Owned by Spendthrift Farm, the daughter of Henny Hughes not only won the 2015 edition, but she did so in shockingly impressive style. It can be easily argued that the 8 ¼-length romp in 1:59 3/5 was Beholder’s best ever race, but considering her career to date, that is saying plenty.

Trained by Richard Mandella, and regularly ridden by Gary Stevens, both members of the Hall of Fame themselves, Beholder has been stellar, (no pun intended), since the beginning. After falling short in her career debut to her ultimate rival for juvenile championship honors, the fleet filly quickly began demonstrating her great talent. Her second lifetime race back in 2012 came in a Del Mar maiden on July 22. Beholder won for fun, and the odyssey began.

-She concluded her 2yo season with a win in the Breeders’ Cup Juvenile Fillies over all of her Eclipse Award competition. The victory at Santa Anita, her first stakes win, was enough to clinch her first championship.

-At three, Beholder had her two-race, Grade 1 winning streak broken when a game second to Princess of Sylmar in the Kentucky Oaks. That would be her last loss of the season, which concluded by an impressive win against older mares in the Breeders’ Cup Distaff.

-Her following season was cut short by illness, but there is little doubt that Beholder would have been the one to beat in that year’s Breeders’ Cup Distaff had she not been forced to miss the race. Untapable won the race in her absence.

-Beholder was perfect at five, including that Pacific Classic bomb. Once again, she was forced to miss the Breeders’ Cup (this time she was being pointed for the Classic) due to health reasons. Still, her five wins in graded stakes, in five starts was more than enough to earn her third Eclipse Award.

-This year, she has two wins from three starts, having suffered a narrow loss to the champion Stellar Wind in her last race. It was her first loss in more than two years. Take her lightly because of that loss on Saturday at your own risk.

Meanwhile, California Chrome figures to be the favorite for this year’s Pacific Classic, over the mare. Like Beholder, he also checks all the needed boxes to be a first ballot Hall of Famer. With his win in this year’s Dubai World Cup, the Art Sherman trained chestnut became North America’s all-time leading money winner. Not bad for a horse who came from modest beginnings.

The son of Lucky Pulpit began his career as a juvenile in 2013 by running second in an April debut. Who would have thought that the colt who finished second in a California-bred maiden race, going 4 ½ furlongs on the synthetic surface of old Hollywood Park would someday become the 12 million-dollar man? Like Beholder, he was a second-out winner, and soon after a stakes winner. There would be no juvenile championship for Chrome, running against primarily statebreds, but by the time he arrived in Louisville for the following spring’s Kentucky Derby, with Victor Espinoza in the saddle, he was the toast of American racing.

-As a juvenile, California Chrome won two stakes races, but it was in his final start of the season, where Chrome tipped off his future success. The overpowering victory in the King Glorious Stakes kicked off what would become a special six-race winning streak.

-He arrived in Louisville as the clear favorite for the Run for the Roses, and he would not disappoint. Impressive victories in the Kentucky Derby and Preakness made him America’s Horse, but it was a narrow defeat in the Breeders’ Cup Classic, followed by a win on the grass in the Grade 1 Hollywood Derby that sewed up the Horse of the Year honor.

-Much of California Chrome’s four-year-old season was lost due to injury, but his two races, a second to his excellent rival Shared Belief, and a second in the Dubai World Cup, did nothing to tarnish his reputation as one of the best horses in the nation.

-Brought back for a five-year-old season, all the bad luck suffered in the previous season has been washed away by four wins without a loss. Not only did he avenge his defeat in the world’s richest race, but he recently got the best of one of this year’s top rivals, when beating Dortmund in the San Diego Handicap. He looks very ready for his first shot at the Pacific Classic.

One of them has to lose on Saturday, (unless they dead-heat), and who knows, perhaps both will be defeated in the Pacific Classic, but either way, there can be no doubt that they are both ultimately headed to the same place … Racing’s Hall of Fame.