The Grey Gatsby over Australia: Race of the Year? 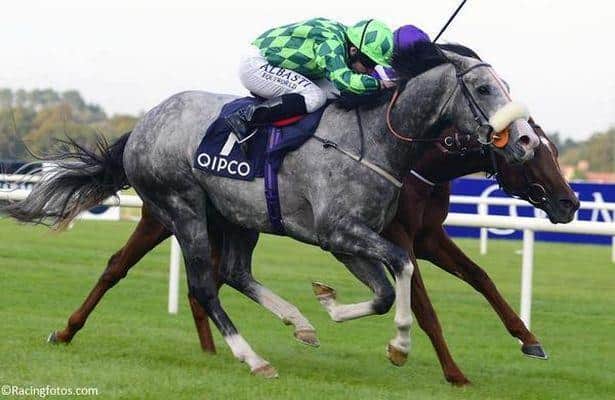 Despite being a French Derby winner, The Grey Gatsby suffered from an identity crisis. As classic distance colts in Europe go, the conversation began and ended with Australia. And why not? The Aidan O’Brien trained colt has everything. The good looking son of racing royalty (Galileo and Ouija Board) collected classics with impressive wins in the Epsom and Irish Derbies. More recently, he had made it three straight major victories by stepping up against older in the Group 1 Juddmonte International. While good older horses battled it out for minor awards that afternoon, it should be noted that it was the other three-year-old (The Grey Gatsby) who was closest to Australia that day. The not so small fact that his ‘been-there-done-that’ trainer has called him the best horse he has ever trained only helped fuel the Australia fire. But not so fast, race fans. Yesterday at Leopardstown Racecourse, just outside of Dublin, there was a good old fashioned Irish reversal of fortune, and The Grey Gatsby can be overlooked no more.

With Ryan Moore in the saddle, The Grey Gatsby took on the challenge of Australia once more in the Group 1 Irish Champion Stakes, and what would transpire over the ten furlongs of the Leopardstown turf would become an instant classic. Despite the spectre of tough older horses, Mukhadram, Al Kazeem and Trading Leather, The Grey Gatsby was made the second choice. Albeit a distant 7-1 chance behind the overwhelming favoritism of Australia. Through most of the running, Australia looked poised to back up his burgeoning legend.

As the real running began, Australia and rider Joseph O’Brien swung into action on the outside and powered by the five obstacles that laid between him and the finish line. Meanwhile, the only horse in the field of seven who had been behind him early, was cranking up an eye catching turn of foot from behind. The only grey in the field was flying, but still it appeared that it would take something incredible to catch and overtake the heavy favorite. With a quarter mile to run Australia took command and went on, but The Grey Gatsby was in high gear, and quickly cut into the advantage. If indeed something special was needed to defeat Australia on this day, The Grey Gatsby was up to the challenge. A sixteenth of a mile from the conclusion, the battle was joined, and while Australia fought on gallantly, the silver streak to his outside was moving too well to be denied. I challenge you to find a better quality stretch run in 2014 than this …

At long last, the grey son of Mastercraftsman has earned the respect that he so richly deserves. Trained by Kevin Ryan and owned by Frank Gillespie, the Irish-bred colt raised his lifetime record to four wins, and four seconds from 11 lifetime runs. More germane to truly pointing out the type of horse The Grey Gatsby has become, though, are his three notable victories in his last five starts. In May he accounted for the Group 2 Dante Stakes at York. In June, it was the French Derby at Chantilly, and yesterday at Leopardstown, came his best performance to date. Throw in the strong second to Australia in the International, and the overall class of The Grey Gatsby should no longer play second fiddle to Australia or anyone.

Considering that his only poor performance recently came at 12 furlongs on soft turf at Longchamp, it should come as no surprise that the Prix de l’Arc de Triomphe will not be on his dance card. England’s richest race, the Champion Stakes at Ascot could be the race that closes out his season, although, it should be noted that The Grey Gatsby is nominated for the Breeders’ Cup. Happily, plans for a four-year-old campaign are already in the works for this disrespected colt no more.