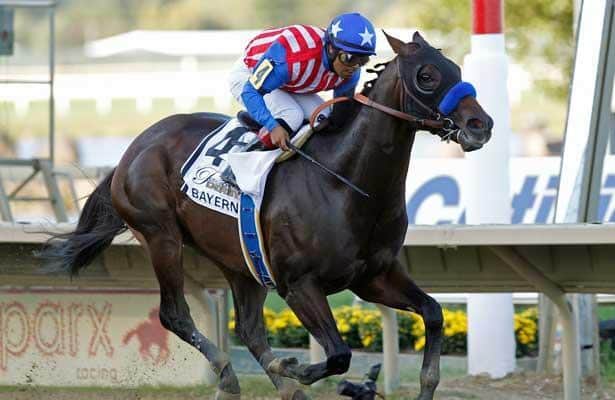 On his best, Bayern is a freewheeling talent who runs the other horses into the dirt with speed to spare. A modern day Spend A Buck, the good Bayern dares his competition to try to keep up with him furlong after punishing furlong. In his first season of racing, we’ve seen the good Bayern on several occasions.

On February 13, the son of Offlee Wild won a Santa Anita allowance race at a flat mile by 15 lengths in only his second career start.

On June 7, Bayern crushed a deep field of Grade 2 sprinters in the Woody Stephens at Belmont Park, running the seven panels in 1:20 and change.

On July 27, the Kaleem Shah owned sophomore won his first Grade 1 around two-turns with a sizzling performance on the Jersey Shore, stopping the clock in 1:47.82 for the nine furlongs of Monmouth Park’s Haskell Invitational.

On September 20, Bayern met his latest challenge with perhaps his biggest performance to date. Running the fastest nine furlongs ever seen in Suburban Philadelphia, Bob Baffert’s top runner blitzed a strong Pennsylvania Derby field with a wire-to-wire win in 1:46.96.

Despite finishing first* in six-of-nine career starts, there is another Bayern, though. At his worst, the dark bay colt appears but a shell of the brilliant multiple grade 1 winner highlighted above. The bad Bayern packs it in early and often and flounders home anything but like a champion.

On May 17, the descendent of the wonderful maternal influence of Courtly Dee entered racing’s Middle Jewel as an interesting and lightly raced candidate. After a troubled run into the first turn at Pimlico, he could never put much of a dent into the Preakness field and came home an up-the-track ninth.

On August 23, after a pair of huge wins at Belmont and Monmouth, Bayern came to Saratoga as the favorite against a solid field in the Travers. He felt a little early pace pressure from Tonalist, but had nothing more to give less than a mile into the ten furlong summertime test. It was another up-the-track finish in one of America’s biggest races, ultimately finishing a distant tenth of ten.

Not so coincidently, the bad Bayern showed himself against strong fields while racing in his only two contests to date farther than nine furlongs.

On the other hand, there can be little doubt that if either the Haskell or the Pennsylvania Derby had one extra furlong added to their actual 1 1/8 miles, Bayern still would have hit the wire an impressive winner. Those victories were not without strong competition either, leaving horses like California Chrome, Untapable, Tapiture, and Candy Boy in his sizable wake.

As we move closer to the November 1 Breeders’ Cup Classic, Bayern seems to be getting the least amount of ink of the big four of the sophomore class. It makes sense; while Shared Belief, California Chrome, and Tonalist are all proven at ten furlongs, Bayern needs to prove he can get the job done at the American classic distance in America’s richest race.

Like many, I too have my doubts as to whether the good Bayern will be the one we see next month at Santa Anita. Not only is the distance a question, but so too will be his ability to handle the early speed expected to come from Moreno and Big Cazanova. Those two have major early get up and go, so Bayern will probably need to put to fruition his trainer’s belief - that his horse does not need the early lead to be successful and at his best - in order to enjoy real success in the Classic.

Is a Breeders’ Cup Classic victory in the cards for Bayern? I certainly like a few others better, but taking a horse with this much talent, and one that still may be improving, lightly, would seem to be a dangerous proposition.

*-Bayern was disqualified from first and placed second in the Derby Trial at Churchill Downs.