The Best of the Cigar Mile 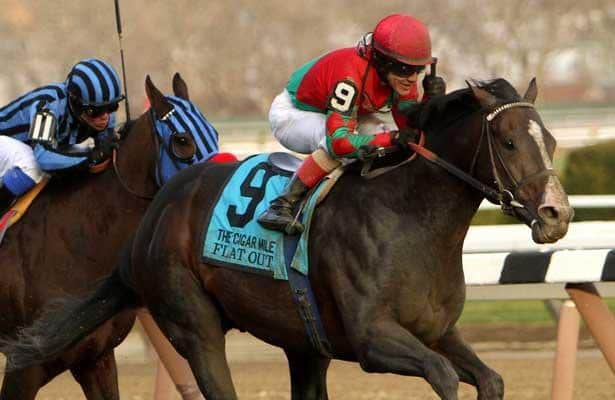 With yesterday’s impressive five length win in the Grade 1 Cigar Mile, Good Friends Stable’s Private Zone achieved a number of good things: In running arguably the best race of his career, he won for the 7th time in 25 starts, including three Grade 1 wins. He topped $1.5 million in career earnings, and he also likely threw his hat into the ring for Male Sprint Champion, but … was it all enough for the Canadian-bred to crack the Top 10 list of the greatest winners of the Cigar Mile? Not quite, but as a gelding, the son of Macho Uno should have plenty of opportunity to add to his growing list of accomplishments. The list, of Matt Shifman and I, reflect our opinions on the all-time best to win one of our favorite late-year races. Let the countdown begin!

10. Dispersal (22-12-3-2) - Buddy Delp’s “other” horse was a two-time Derby winner in 1989. He finished his three-year-old season by winning the Cigar Mile, before finishing a fast-closing third in the Breeders’ Cup Sprint. He continued on to be a good four-year-old with five stakes wins including the Grade 1 Woodward.

9. Kodiak Kowboy (23-11-4-3) - A top class sprinter since the beginning of his career at two, the son of Posse could not have finished his career any better than his rallying win in the 2009 Cigar Mile. The three-quarter length victory over a talented field sent him to the breeding shed in style, and with an Eclipse Award as Champion Sprinter.

8. Rubiano (28-13-6-1) - Winning the Cigar Mile was the first graded stakes win in a stretch of eight wins in nine races for the gray late runner which propelled him to Championship Sprint honors the following year.  Around one-turn, no lead was too much for this Virginia-bred to make up as evidenced by his thrilling victory in the 1991 edition.

7. Discreet Cat (9-6-0-2) - He only ran nine times in his career, but on his game, the son of Forestry was a devastating talent. His easy UAE Derby happened to be Invasor’s only career loss, but it may have been in the 2006 Cigar Mile, when Discreet Cat was at his very best. His 3 ¼-length victory in 1:32.46 remains the fastest edition ever.

6. Affirmed Success (42-17-10-6) - He may not have had as much talent on many of this list, but this gelding was a true warrior. Not only did he compete in one of two Breeders’ Cup races in four consecutive seasons, but the son of the last Triple Crown winner also was multiple graded stakes winner on both turf and dirt.

5. Left Bank (24-14-2-0) - Once thought of as a sprint specialist, this Todd Pletcher trainee used a convincing win in the 2001 Cigar Mile to springboard to the best season of his career in 2002. Beating top horses in the Grade 1 Whitney was not only the final race of his career, but also the race that convinced voters that he was the nation’s top older male.

4. Flat Out (29-9-5-5) - Like Kodiak Kowboy, he closed strongly to win the Cigar Mile in his final career race, and like Affirmed Success, he was a racing warrior. Despite a serious physical setback, he came back to amass more than $3.6 million in career earnings. Any doubt as to his overall class should be dispelled by back-to-back wins in the ten furlong Jockey Club Gold Cup.

3. Congaree (25-12-2-4) - The son of Arazi was much more than the only ever two-time winner of the Cigar Mile. As a lightly raced three-year-old, he won the Wood Memorial, and finished 3rd in both the Kentucky Derby and Preakness, and then kept on going. All told, the consistent, durable and versatile runner won ten graded stakes in a stretch of three seasons.

2. Forty Niner (19-11-5-0) - All class. His career may have only lasted two seasons, but the son of Mr. Prospector, trained by Woody Stephens, crammed plenty of excellent racing within a short period of time. The Champion 2yo of 1987, came back at three to win five stakes at three, including the Haskell, Travers, and the then NYRA Mile. He would be remembered differently in history if his late surge in the 1988 Kentucky Derby didn’t fall just short.

1. Cigar (33-19-4-5) - As if there was any doubt. First ballot Hall of Famer. Two-time Horse of the Year. $9.999 million in the bank. 16 wins in a row, with the NYRA Mile of 1994 being the first stakes score in the bunch. There is a reason the race was renamed to the Cigar Mile. Incomparable. Invincible. Unbeatable. Cigar.