2021 Kentucky Oaks field is both deep and talented 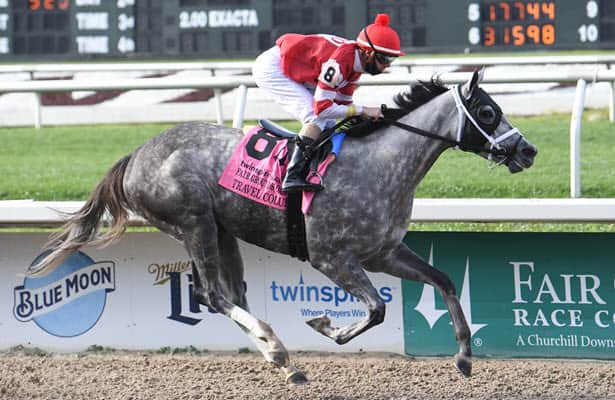 Although the Kentucky Derby receives most of the fanfare in the months leading up to the first Saturday in May, its sister race at Churchill Downs also is one of great prestige, and this year the Kentucky Oaks is shaping up to be an outstanding race.

With a long list of interesting contenders for the April 30 feature, the female counterpart to the Run for the Roses just might end up being the best race run under the famed twin spires this spring.

Travel Column and Clairiere have been knocking heads for a while now, and the Kentucky Oaks will be an ideal place for round 4. Thus far it is Travel Column who has gotten the best of the rivalry, having won the first and third meeting between the two talented fillies. An impressive winner of last year’s Golden Rod (G2) at Churchill Downs, the daughter of Frosted has been sharp in her two starts this year for trainer Brad Cox.

Clairiere got the best of her in a tough stretch battle to open their 2021 seasons in the Rachel Alexandra (G2), but Travel Column used her good tactical speed to easily win last time in the Fair Grounds Oaks (G2). It was a very impressive win, and it could make her the favorite in the Kentucky Oaks.

Her rival certainly could bounce back at Churchill Downs, though. Never beaten by anyone other than Travel Column, the regally bred daughter of Curlin and Cavorting was up against it in the last one, as neither the early pace nor racing luck proved to be on her side. A better trip for Clairiere in Louisville could even the rivalry once again.

These two competitors deserve their spot at the top of the division, but a couple of undefeated fillies from the East also will get plenty of support at the betting windows. Malathaat and Search Results are a combined 7-for-7, and both look talented enough to have a big say in who wins this year’s Grade 1 classic.

Like Clairiere, Malathaat is a tremendously bred daughter of Curlin. Out of the extremely talented broodmare Dreaming of Julia, she is unbeaten in four starts. Three of them came last year, when she accounted for both the Tempted Stakes and the Demoiselle (G2) at Aqueduct last fall.

In her first race outside of New York, and her seasonal debut, the Todd Pletcher trainee showed tremendous class and determination to get up on the shadow of the wire in the Ashland Stakes (G1) at Keeneland.

Search Results, on the other hand, used her early speed to dominate the recent Gazelle (G2) at Aqueduct. It was her third win in three starts for the Chad Brown-trained daughter of Flatter. All of her races have come this year, and she has looked better in each successive start. She has been a little light on competition so far, and things went her way tactically in the last one. But the potential for further improvement certainly makes her a real threat in the Oaks.

Then you have a pair of fillies from prominent barns who might be getting good at just right the time. Crazy Beautiful has had several chances in graded stakes since winning the Ellis Park Debutante in her second career start, but it was her second start of the season this year that has people excited. Last early in the Gulfstream Park Oaks (G2), the daughter of Liam’s Map weaved her way through traffic on her way to an easy win.

You’ll recall the Gulfstream Park Oaks is the same race that Swiss Skydiver used as a springboard to her championship season of 2020. From the same barn, Kenny McPeek will hope Crazy Beautiful can do one better than the runner-up finish of her famous stablemate in last year’s Kentucky Oaks.

Meanwhile, Pauline’s Pearl is yet another Oaks filly bred to the hilt. A daughter of Tapit and Hot Dixie Chick, she has made a steady progression for Hall of Fame trainer Steve Asmussen. A loser of her first two starts, she won nicely in her third start, which came in February at Fair Grounds. Moving right up into graded stakes competition after that, she was a good second in the Honeybee (G3), before proving best in the Fantasy (G3), both at Oaklawn Park.

And these six stakes winners might only be the tip of the iceberg in the Kentucky Oaks. Pass the Champagne was the filly nailed by Malathaat in the Ashland, and having run in only a pair of sprints beforehand, there is every reason in the world to believe that the George Weaver-trained daughter of Flatter can move forward off the experience.

Will’s Secret fended off Pauline’s Pearl nicely in the Honeybee before rallying late for third in the Ashland. The longer stretch at Churchill Downs could be beneficial for the daughter of Will Take Charge.

Out West you have Soothsay, who in only her second career start was able to keep Beautiful Gift at bay in the recent Santa Anita Oaks (G2), and could be any kind for trainer Richard Mandella, while the runner-up that day won previously with an impressive late charge in the Santa Ysabel (G3) for trainer Bob Baffert.

Lastly, I should mention Maracuja, who ran on well despite the slow pace to be a good second in the Gazelle. The daughter of Honor Code was making her two-turn debut in that one and should appreciate more pace, which she is likely to find in the Kentucky Oaks.

The Kentucky Derby will always be "the race," but this year, it’s hard not to like the group of fillies headed to the Kentucky Oaks. Deep and talented, they are sure to provide a good one on the day before the Derby.

Meet Brian Zipse
Brian has been a passionate fan of horse racing his entire life. Taken to the races at a very young age, he has been lucky enough to see all the greats in person from Secretariat, Forego, and Ruffian through Rachel Alexandra, Zenyatta, American Pharoah and Justify. Before coming to HRN, Brian displayed his love for the sport through the development of his horse racing website, which quickly became one of the most popular blogs in the game. His racing partnership venture, Derby Day Racing, invites more fans to experience the thrill of racehorse ownership.
The Editor of Horse Racing Nation from 2010-2017, Brian authored a daily column as Zipse at the Track, created the popular racing webcast HorseCenter, and added his editorial flare to the overall content of the website. Now a Senior Writer for HRN, Brian continues to contribute his thoughts on racing, as well as hosting HorseCenter. A big supporter of thoroughbred aftercare, he serves on the Board of The Exceller Fund.
Brian's work has also been published on several leading industry sites. He has consulted for leading contest site Derby Wars and is a Vox Populi committee member. He is a voter for racing's Hall of Fame, as well as a weekly NTRA poll voter.
A horse owner and graduate of DePaul University, Brian lives just outside of Louisville with his wife Candice and daughter Kendra.
ZATT's Star of the Week
Harvey's Lil Goil