Still Under the Radar: American Dubai, Cupid & My Man Sam 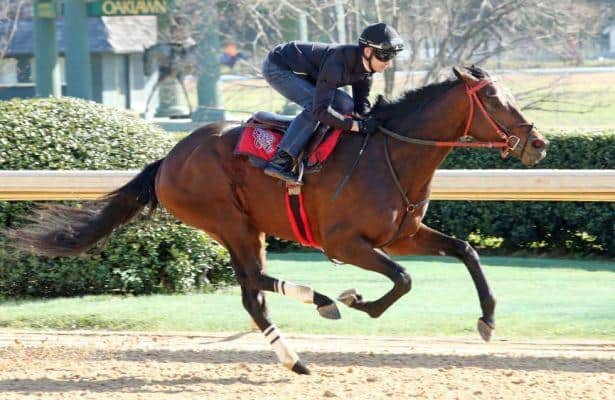 With only eight weeks to go until the 2016 Kentucky Derby, it is getting harder to find legitimate horses that are still flying low, beneath the radar of most. Therefore, I believe this is a good time to roll out the last installment of the series for the year. That being said, I still have a few good ones left. American Dubai, Cupid, and My Man Sam have only made nine starts between them, but all carry a good deal of potential moving forward in prep season. Let’s roll them out in alphabetical order.

American Dubai (E Dubai—Smash Review, by Bates Motel) is a Virginia-bred who was sold at auction three times before making it to the races. The last of which was for $50,000 at a March two-year-olds in training sale at Ocala. Purchased by Richard Keith, and sent to the barn of Rodney Richards, he has been looking like a bargain ever since. He began his career with a good looking debut going six furlongs at Churchill Downs last November. After being bothered at the start, he made a powerful rally from well back to win going away at the wire. Sent to Oaklawn Park and stretched out for his next start, American Dubai (pictured above) continued to gather valuable experience.

Leading all the way under Calvin Borel, the 9-5 favorite ducked in sharply and was caught late in an 8 ½ furlong allowance affair on January 21. Finishing second, and placed third, it was a tough defeat to take, but it toughened him up for his third career start. That would come in the Grade 3 Southwest Stakes, where he again was part of the pace. He took over from Siding Spring as the field turned for home, but there was a cavalry charge bearing down on him at the top of the stretch. He never gave in, though, and battled Whitmore all the way to the wire. Unfortunately, that losing battle only turned out to be for second in the 14-horse field, as Suddenbreakingnews had come from last to swoop the field. American Dubai had to settle for third.

In a race that very much set up for a closer, American Dubai hung around with extreme gameness in the Southwest. It was a gritty performance in his third lifetime start to be sure, and one that should serve him well moving forward. He will next run in Oaklawn’s Rebel Stakes on March 19. With a big field expected, look for him to go off at very attractive odds. He is not the only under the radar horse pointing for the big money of the $900,000 race, though.

A son of America’s leading sire, and produced by a graded stakes place mare, Cupid is part of the powerful Bob Baffert barn. A $900,000 yearling purchase, he first made it to the races for his powerful trio of owners (Tabor, Magnier, and Smith) on December 20 at Los Alamitos. That afternoon, he made a move in between horses, but could not sustain the bid, and finished three lengths behind the winner. Improvement came in his second start, but it was not enough to get the win. This time at Santa Anita, he was second best to the talented Denman’s Call, but his trip was far from ideal. After two defeats sprinting, Baffert stretched his charge out in start number three, and the result was impressive.

On February 7 at Santa Anita, the third time proved the charm for Cupid. The gray did not get off to the best start, and had to stalk behind moderate fractions, but he made a sweeping move on the far turn to power to the lead, and despite still looking a tad green, he continued to open up to the wire. It was an impressive win in the 8 ½ furlong maiden race, that figured to lead the well-bred colt right to graded stakes racing.

After a strong six-furlong work yesterday in 1:11.60, Cupid (Tapit—Pretty ‘n Smart, by Beau Genius) has been removed from consideration from tomorrow’s San Felipe Stakes in favor of just a little more time before the Grade 2 Rebel. Considering Baffert’s track record at the Arkansas oval, and the serious improvement this one has demonstrated in his three starts, he will diefinitely be one to watch on March 19

Last but not least, let’s not forget about My Man Sam. He’s yet to run in a stakes race, but with next month’s Wood Memorial scheduled to be his next start, he might just be the winner of a million-dollar race in his stakes debut. What gives me so much confidence in a horse coming off an allowance loss? Well, there’s plenty to like about the Chad Brown trainee.

My Man Sam (Trappe Shot—Lauren Byrd, by Arch) is a Kentucky homebred for Jay W. Bligh, who now owns the bay colt in partnership with Sheep Pond Partners and Newport Stables. He did race as a two-year-old, but only just barely, debuting on December 19 at Aqueduct. Bumped soundly at the break, the 5-1 shot lagged in last for much of the six-furlong sprint, before showing good interest late to finish in the middle of the pack. Call it a learning experience, because he was ready to win in his second start. That came on the last day of January, also at the Big A. Again sent off at 5-1, and stretched out to 8 ½ furlongs, he showed just a little more speed than his career debut, but this time his late run came with more fury. Picking them up on the far turn, he swung wide on the turn and mowed down the leaders on the way to a big eight-length score. Off the impressive victory, My Man Sam would face his first real quality competition in his third outing.

In the allowance race last Sunday, he found himself facing a pair of well-liked colts in Matt King Coal (a previous under the radar spotlight horse) and Mo Power. With the latter not pressuring the former early, the 1 1/16-mile allowance affair quickly became the talented Matt King Coal’s race to lose. He didn’t, but it was hard to miss My Man Sam motoring down the lane to get within a length of the winner at the wire. It was a powerful and sustained rally against a loose on the lead runner, that makes me believe both the winner and the runner-up have a big shot in the Grade 1 Wood Memorial next out. The fact that both the time and the speed figures came back better than the previous day’s Gotham Stakes, doesn’t hurt my feelings a bit either. Of the two, I might even like My Man Sam better. He continues to progress and impress, and the extra sixteenth of a mile, plus more pace pressure, should only make his late run all the more dangerous.

There you have it, three more runners to watch as we move ever closer to the Kentucky Derby. I hope you have enjoyed following along with the under the radar spotlight horses … now let’s go get some prices in all the big preps leading up to the first Saturday in May.