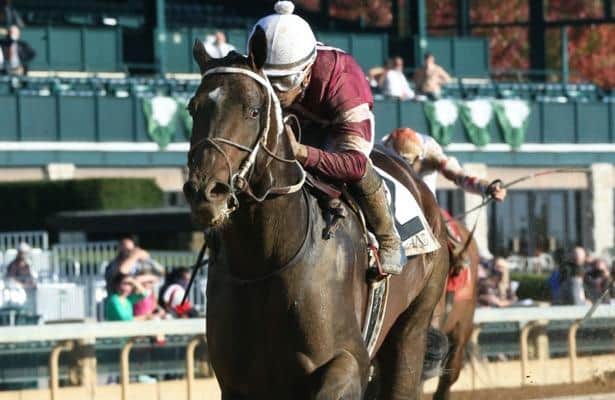 Silver State will look to finally become a stakes winner when he makes his 4-year-old debut in Saturday’s $150,000 Fifth Season Stakes going one mile at Oaklawn Park.

He hasn’t found an easy spot, as he’ll face tough older graded stakes horses such as Combatant, Night Ops and Pioneer Spirit. But this race could be the start of something big for the son of Hard Spun.

When last seen on the big stage, Silver State could not make his move and he finished in the middle of the pack in the $1 million Louisiana Derby. It was a disappointing result, but the fact that he was made the third choice in the big field of 14 speaks to his upside.

Owned by Winchell Thoroughbreds and Willis Horton Racing, Silver State was a $450,000 purchase at the 2018 Keeneland September yearling sale. The bay colt is out of the stakes-winning Empire Maker mare Supreme, who was consistent enough to finish first or second in nine of her 10 career starts.

Silver State first made it to the races for Hall of Fame trainer Steve Asmussen in early fall of his juvenile season at Churchill Downs, where he displayed serious talent right away. In that debut, he rallied strongly to get up for a dead heat with a future multiple stakes winner in a 6 1/2-furlong sprint. The pair was nearly 10 lengths clear of the third-place finisher in the 11-horse field.

He came back two months later and lost the head-bob by a nose on a sloppy track at Churchill in a Nov. 30 allowance race, which would be his only other start at 2. The winner of that one-mile race, Necker Island, would go on to finish ninth in the 2020 Kentucky Derby.

Silver State made his stakes debut to begin his sophomore season 12 months ago in the Grade 3 Lecomte Stakes at Fair Grounds. There he overcame trouble to come from ninth in the 13-horse field and get up for a solid second-place finish. It was a very promising result in his first attempt around two turns.

Off that, Silver State was made the favorite in an 11-horse field for the first division of the Grade Risen Star Stakes (G2) at 9 furlongs. He made a move but could never reel in Mr. Monomoy, who had cruised on a moderate pace throughout. Still, the third-place effort in his fourth lifetime start had him squarely on the Kentucky Derby trail.

But that was not to be after the Louisiana Derby disappointment at 1 3/16 miles, and Silver State would not reappear again until late October in Kentucky. Promising, but quite there early in his 3-year-old season, he returned better than ever in an allowance race over the seven-furlong and 184-foot Beard Course at Keeneland.

Settling well off the pace in seventh place early, he fired to the front with a big turn of foot and powered home down the stretch to a dominant seven-length score.

Back on track, he built on that impressive return next time out. Showing a higher turn of early speed than ever before under regular rider Ricardo Santana Jr., he tracked the pace in a late November 7-furlong allowance race at Churchill Downs and easily handled a compact field of fast horses.

His second straight impressive victory raised his lifetime record to 7: 3-2-1, but still no stakes victories.

So here we are again. Much as we were one year ago, Silver State looks poised and ready to become a serious stakes horse. Will it be different this time around?

Now a mature and experienced 4-year-old, I expect better things for the son of Hard Spun. The Fifth Season should be the start of something good.