Shug McGaughey only runs good ones in the Kentucky Derby 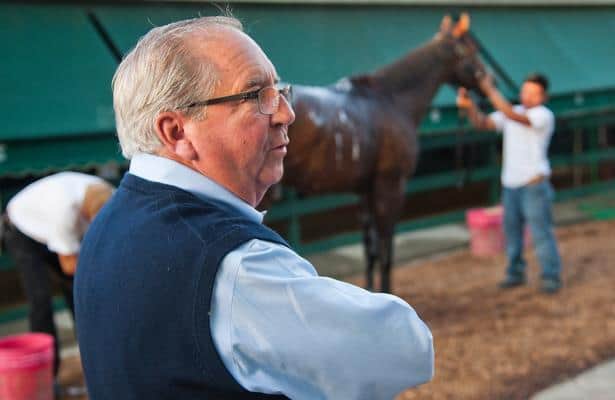 Hall of Fame trainer Claude “Shug” McGaughey announced himself on the Kentucky Derby trail once again with the performance turned in by Greatest Honour in winning Saturday’s Holy Bull (G3).

The regally bred son of Tapit easily rallied by his competition at Gulfstream Park and should only get better as the distances increase. The bay colt gives every indication of being a serious contender for the first Saturday in May, which is important, because that is the only kind of horse his Eclipse Award-winning trainer runs for the roses.

Given all of his accomplishments, it might surprise you to know that McGaughey has run only eight horses in the Kentucky Derby. It might not seem like a small number, but it pales in comparison with other top trainers of the era, such as Todd Pletcher and Bob Baffert.

A nine-time winner at the Breeders’ Cup, McGaughey has never been one to push young horses into races for which they’re not ready. A consummate horsemen, the 70-year-old recognizes the Kentucky Derby as the race that everybody wants to win, but he has never been willing to send out any old long shot after American racing’s biggest prize.

In fact, when Code of Honor rallied up the rail to finish third and then be placed second, in the 2019 edition, it was only McGaughey’s third Derby starter in 30 years.

In 1984, a much younger version of the Hall of Famer took his first shot at Kentucky Derby glory with a pair of solid colts. The more talented of the two was Vanlandingham, who had set a track record in his previous race in winning Oaklawn Park’s Rebel Stakes. Unfortunately, he was injured in the Derby and finished 16th. Showing his patience even as a young trainer, McGaughey brought the son of Cox’s Ridge back to the races more than a year later and guided him to a championship season at 4.

It was McGaughey’s other runner in 1984, Pine Circle, also a son of Cox’s Ridge, who found more success in that year’s Triple Crown series, finishing sixth in the Derby and fifth in the Preakness before coming home second in the Belmont Stakes. A little over a year later, the trainer’s career found a new, exciting trajectory when he was selected to train for the Phipps Family stable.

It was that connection which would bring McGaughey great success as well as three more Kentucky Derby runners later that decade. Seeking the Gold was a very talented runner who had a strong career, but he did not bring his absolute best when seventh in 1988. But the next year, McGaughey arrived in Louisville as the trainer everyone was trying to beat.

Of all of McGaughey’s great horses, Easy Goer might have had the most ability. He came to the 1989 Kentucky Derby as a champion and a heavy favorite. In fact, he was the headliner of a heavily favored entry that also included the Flamingo winner Awe Inspiring.

On an ugly weather day in Louisville and a muddy main track at Churchill Downs, McGaughey’s pair ran second and third, respectively, as a new champion, Sunday Silence, emerged. It was the first of four epic battles waged between Easy Goer and Sunday Silence, and five weeks later the Phipps color bearer would give McGaughey his first taste of Triple Crown success with an overpowering Belmont Stakes win.

It would be 13 more years before the trainer would next enter a horse in the Kentucky Derby. Saarland, a son of Unbridled who had won the previous year’s Remsen, had plenty of backers but would prove to be less talented than McGaughey’s other Derby starters. He finished 10th in the 2002 edition.

It was Orb, half a dozen years before Code of Honor and 11 years after Saarland, who finally gave the legendary trainer his initial Kentucky Derby success. His authoritative rally down the sloppy track at Churchill Downs as the 5-1 favorite in the 2013 edition of the Run for the Roses made a lot of people happy for his veteran trainer.

Now it looks like the very likable trainer has another legitimate contender for the first Saturday in May in Greatest Honour. Sired by one of America’s top sires, he also has a magical female side of his pedigree to fall back on as a grandson of the great broodmare Better than Honour. Bred to the nines and improving with every start, he looks like just the type to urge his Hall of Fame trainer to have another go at Churchill Downs.

The Kentucky Derby is always better with Shug McGaughey in it, but it only happens when he has the right horse.