Shaman Ghost might be the horse to slay the Pegasus Giants 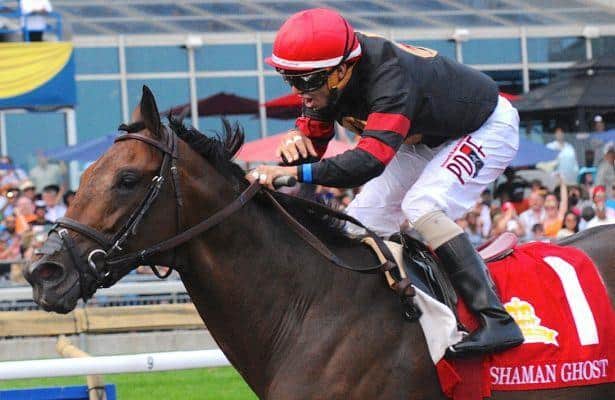 Shaman Ghost was supposed to get his chance against the likes of California Chrome and Arrogate in last fall’s Breeders’ Cup Classic. While those two ran away from the rest, in one of the best races of 2016, the son of Ghostzapper was back in his barn, working through a minor illness which developed soon after arriving in California. While that opportunity was not to be for the Adena Springs homebred, he did not have to wait long for another opportunity to slay the giants. His chance will come Saturday in the first running of the $12 million Pegasus World Cup.

Trained by Jimmy Jerkens, the son of Hall of Fame trainer Allen Jerkens, since the end of his three-year-old season, Shaman Ghost is a horse who has been improving his entire career. After finishing out of the money in his first three career races, the Ontario-bred has won six-of-ten starts, including a strong maiden breaking performance at Gulfstream Park. Among subsequent wins, were the Grade 1 Woodward and the Grade 2 Brooklyn last year, and the Queen’s Plate as a three-year-old.

All in all, it seems like a very good record, but in the preamble to the Pegasus, it only gets him the designation as a 20-1 shot on the morning line. Most of that, of course, is attributable to the top two, but part of it also comes from a disappointing finish in his most recent start. A start that came just 20 days after his scratch from the Breeders’ Cup. At first glance, his well beaten third-place finish in the Grade 1 Clark Handicap behind Gun Runner might seem to leave him little chance against the top two dirt horses in the world, but his trainer believes the result can be excused.

“I thought it was better than it looked on paper,” Jerkens remarked. “I thought the track was pretty speed-biased that day. He made a nice run around the turn, but he was losing ground and they weren’t going fast enough up ahead of him to tire in front of him. When he saw that he got a little disappointed and it looked like he was going to fall out of it, but then he kept going to finish third and I thought that was great. It’s always a good sign when they come back on like that.”

Freshened since, it would seem the house horse has a lot going for him as the Pegasus underdog. The Frank Stronach owned bay horse has been looking good and firing off bullet works down in South Florida in preparation for his first race back at the track where he earned his initial victory.

Slotted to break from the seven-post, Shaman Ghost has enough tactical speed to stay in touch early, but in the Pegasus, he will need to close strongly to win. He should have plenty of speed to run at in front of him, as the two big favorites look to secure forward positioning from their respective bookend posts, not to mention other strong early speed in the race like Noble Bird.

Shaman Ghost will have also have a new rider in the saddle. Jose Ortiz had a huge year in 2016, and the young rider could well be on the verge of winning something huge like the Pegasus World Cup.

With California Chrome and Arrogate in the mix, anything better than a third-place finish in the Pegasus World Cup would be major news for the son of the 2004 Horse of the Year, and a win would be a downright shocker. It may be unlikely, but it is not impossible. Shaman Ghost is already a Grade 1 winning horse, who likes to win, and best yet, he very well may still be improving.

As the son of legendary trainer, Allen Jerkens, Jimmy Jerkens has seen plenty of big upsets in his life. His father, affectionately known as the ‘Giant Killer' knocked off such racing stars as Buckpasser, Kelso, and the mighty Secretariat on more than one occasion. In Shaman Ghost, his son may have just the horse to follow in his father’s impressive footsteps.