Serengeti Empress back on track after brave Ballerina win 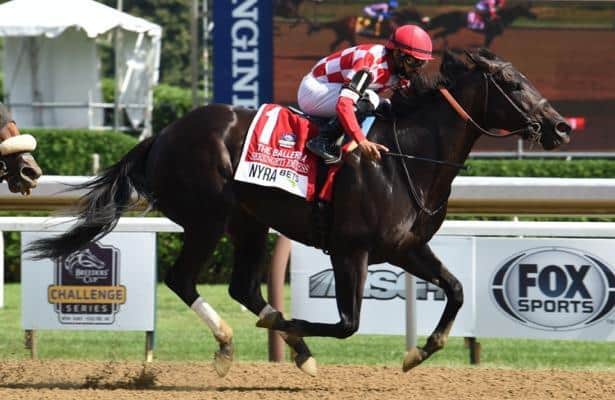 On a day of huge performances at Saratoga, the race turned in by Serengeti Empress should not be overlooked.

There can be little doubt that the sublime performance of Tiz the Law, in winning the Travers (G1), deserved top billing. Following closely behind the best 3-year-old in the nation was the brilliance of Gamine in an overpowering Test (G1) win. Then you have Serengeti Empress. The 4-year-old daughter of Alternation was in a need of a career reset, and she got it in Saturday’s Ballerina (G1).

Facing several of the best older female sprinters in the nation, the Tom Amoss-trained filly responded with one of the bravest performances seen so far in 2020. Three months before the Breeders’ Cup Filly & Mare Sprint, the excellent victory gives the plucky mare a new trajectory for the rest of her third season on the track.

Among the top of her division ever since winning the 7 furlong Ellis Park Debutante by 13 ½ lengths in August of 2018, Serengeti Empress once again proved her class in the Ballerina.

She’s not perfect. The winner of 7-of-17 lifetime has proved to be very dangerous when running a route of ground when allowed to gun to the lead and see how far she can carry her speed, but when not getting to the lead, it’s pretty clear that she is less than happy.

This fact has led to a few pretty ugly performances, but it’s hard to blame her connections for running Serengeti Empress at a mile or longer in 12 of her last 13 races before being entered in the 7 furlong Ballerina.

After all, she was good enough at a route of ground to win the prestigious Kentucky Oaks (G1) last spring. Around two-turns she was also able to romp home an easy winner in both the 2019 Rachel Alexandra (G2) and a sloppy edition of this year’s Azeri Stakes (G2), as well as a game third-place finish in last year’s Breeders’ Cup Distaff.

Following a pair of disappointing efforts in the Apple Blossom and Fleur de Lis, though, it became clear that it was time for a change. The thought of running against the likes of Midnight Bisou and Monomoy Girl in another edition of the Breeders’ Cup Distaff seemed less than ideal.

Owned by Joel Politi and trained by Amoss, give her connections credit for cutting her back down to a distance she clearly enjoys, despite having found quite a bit of success going a distance.

Breaking from the rail, while being ridden by Luis Saez for the first time, the 3-1 second choice got off to a slow start in the Ballerina. For a confirmed speed horse, against top sprinters, this type of start often means defeat. Not so for Serengeti Empress.

She rushed right up the lead and was pressured by Letruska through taxing fractions of 21.75 seconds and 43.74. After putting that one away, next came the challenge of Victim of Love, who enjoyed a perfect trip up the rail. Once again, Serengeti Empress would not relent.

Finally, it was the race favorite Bellafina making her run on the outside. She asked the front runner what she had left, and the answer was extremely impressive.

The performance may have been slightly overshadowed on the big card by the obvious brilliance of both Tiz the Law and Gamine, but this Ballerina win by Serengeti Empress was nonetheless horse racing at its very finest.

"I couldn't be more proud of her," Amoss said after the victory which gives her automatic entry into the Breeders' Cup Filly & Mare Sprint. "She's a very special filly to the barn and to my family and to the Politis. We call her, 'The gift that keeps on giving,' and she gave today."

With the speed to get the lead in any race she runs, and the heart to fight every step of the way, she once again proved what a nice racehorse she is. It would also seem her talents are perfect for seven-eighths of a mile.

Now 2-for-3 lifetime at the distance of 7 furlongs, with her only loss at the distance coming in heartbreaking fashion to the eventual champion Covfefe in last year’s Test, it looks like the career of Serengeti Empress is once again headed in the right direction.

After Saturday’s Ballerina, you would have to rate Serengeti Empress a big shot in the 7 furlong Breeders’ Cup Filly & Mare Sprint on Nov. 7 at Keeneland.