Zipse: Secret Oath, Nest are ready for round 2 in CCA Oaks 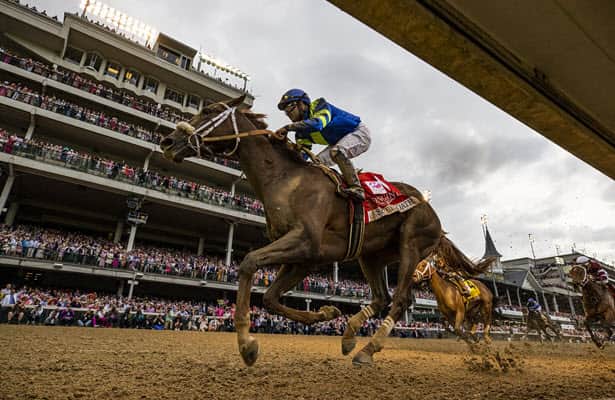 The two top 3-year-old fillies in the land are ready for a rematch, and this time they will use the magical setting of Saratoga as the backdrop for their budding rivalry. When last they met, Secret Oath got the jump on Nest as they ran 1-2 in a loaded 14-horse field in the Kentucky Oaks (G1) at Churchill Downs.

This time around, the pair will find a considerably smaller field when they headline Saturday’s $500,000 Coaching Club American Oaks (G1). Both appear in fine fettle despite coming out of losses in their most recent races.

Secret Oath, who had been working up a storm of late at Churchill Downs, turned in her first workout at Saratoga on Friday. With regular jockey Luis Saez in the saddle, the daughter of Arrogate sped five furlongs over the Oklahoma training track in 1:00.01, pleasing her Hall of Fame trainer, D. Wayne Lukas, as usual.

Nest, on the other hand, generally does not work as fast as her rival, but she turned in a good-looking workout on Saturday. Working in company with Corniche, the champion juvenile male of 2021, the daughter of Curlin worked five furlongs over the Saratoga main track in 1:01.30. Her Hall of Fame trainer Todd Pletcher also loved what he saw from his star filly.

Yes, Secret Oath and Nest both lost their races after the Kentucky Oaks. But the defeats were nothing to be ashamed of, each having faced the boys within the Triple Crown series.

In fact, Nest showed herself to be a top 3-year-old of either gender with a clearly second-best run behind her stablemate Mo Donegal in the final leg of this year’s Triple Crown.

The performance of the regally bred filly in the 12-furlong Belmont Stakes (G1) not only proved the theory that she would love a distance of a ground, but also that she is a filly of class who likely is still improving as she matures.

A winner of 4-of-7 overall, Nest already has accounted for three stakes wins, the first of which came late last fall in the Demoiselle (G2) at Aqueduct. Owned by Repole Stable, Eclipse Thoroughbred Partners and Michael House, she began her 2022 season with a six-length score in the Suncoast Stakes at Tampa Bay Downs.

The romping winner of the Ashland Stakes (G1) at Keeneland, which directly preceded her strong runner-up finishes in the Kentucky Oaks and the Belmont, can move to the head of the class with a win on Saturday at Saratoga.

Standing in her way is the same filly that did 11 weeks earlier under the twin spires of Churchill Downs.

Secret Oath also has faced the males this year – in fact, she did it twice, finishing third in the Arkansas Derby (G1) and fourth in the Preakness (G1).

It might sound like sour grapes, but I hated the trip of the Kentucky Oaks winner in both tries against the males. She was bothered early and fell too far back behind moderate early paces in both.

Surrounding those two losses against the boys are three very impressive stakes wins against fillies this year. The first two came at Oaklawn Park, in absolute romps in the Martha Washington and Honeybee (G3).

Her excellent season was tipped off by a big victory in an Oaklawn Park allowance race on New Year’s Eve over Matareya, who has since come back to impressively win three graded-stakes races of her own.

A Briland Farm homebred, Secret Oath, of course, earned her biggest victory to date in the filly classic at Churchill Downs.

With both fillies working strongly for their returns and showing no ill effects of their tough races against the males, the Coaching Club American Oaks is setting up to be a great matchup.

Once again, the nine-furlong distance of both the Kentucky Oaks and the CCA Oaks should favor Secret Oath, who has that explosive turn of foot when asked. For that reason, I like her chances to get the best of Nest once again.

Things could be different if they both come back four weeks later for the 10-furlong Alabama (G1), at a distance that likely would favor Nest, but I am getting ahead of myself.

For now, let’s enjoy round 2 between Secret Oath and Nest, the best two 3-year-old fillies in America.