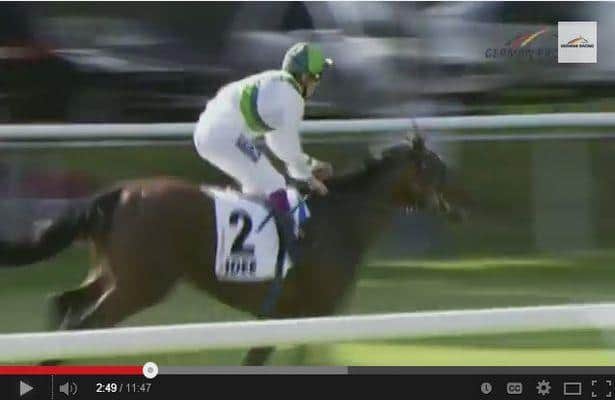 Any remaining doubt as to whether Sea The Stars will be a quality sire may have been put firmly to bed today in Hamburg. The occasion was the German Derby, and the horse in question was the undefeated Sea The Moon, who turned in a stunning performance to run away with Group 1 race.

Aboard the race favorite for the first time, rider Christophe Soumillon let the Markus Klug trained Sea The Moon roll right from the opening bell from his outside post position, and by the time the big field had hit the first turn, the pair was in the lead. From there the bay colt ran free on the lead furlong after powerful furlong.

Sea The Moon quickened on the far turn, and as the German Derby field made their last right hand turn into the Hamburg homestretch, Soumillon let Sea The Moon drift all the way from the inside rail to the far rail right in front of the cheering crowd.

It was a startling move, but one the connections had discussed before the race. Far away from the rest of the pack in more ways than one, the emerging star exerted his dominance and quickly opened up a large advantage. Geared down near the wire, Sea The Moon still managed to win by eleven lengths.

Sea The Moon finished the 12 furlongs in 2:29.86, on the good turf, to better his perfect career to 4-for-4. He previously had won his career debut by four lengths last September in Cologne, before easily taking a group 3 and a group 2 contest this year in preparation of the German Derby.

Out of a successful German female family, Sea The Moon is from the first crop sired by the champion Sea The Stars. As one of the great horses of the 21st century, his sire won eight straight races to close his career after losing his career debut. The final six came in group 1 contests in 2009, including the English 2,000 Guineas, Epsom Derby and the Prix de l’arc de Triomphe.

It’s still three months ahead, but the connections of the undefeated colt will be hoping to not only emulate his sire as an Arc champion, but will also look to join the excellent filly, Danedream, as a German raider to race away with Europe’s biggest event, come October.

His new rider makes no bones about this German colt having what it takes to compete against the best from England and Ireland. Just watch in the stretch run as Soumillon peeks over and back at the competition falling off in the wake of Sea The Moon … It really is something to see.