Saratoga opening day: This Reid filly can upset the Schuylerville 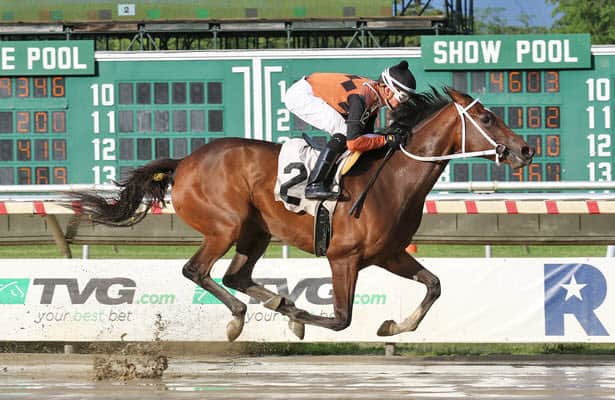 Opening day at Saratoga should be a national holiday. No race meet is met with more anticipation than when they open the gates at the grand oval on Union Avenue each summer. For those who have ever visited, the Spa ushers back an intense connection to racing that no other track can match. For race fans, it is home.

In honor of opening day, and in anticipation of all the wonderful 2-year-olds who will be unveiled this summer at Saratoga, let’s take a look at the afternoon’s co-feature, the Schuylerville Stakes (G3). The historic race for the fairer set has come up strong this year and is led by the streaking Happy Soul.

Trained by Wesley Ward, the daughter of Runhappy finished second on a sloppy track at Keeneland to her male stablemate Nakatomi in her career debut on April 14. In two subsequent starts, she has been a horse afire.

First she romped by 11 3/4 lengths on May 13 in a five-furlong maiden special weight at Belmont Park. Then Happy Soul came back three weeks later to rule the Astoria Stakes by 11 1/2 lengths. Recently seen in the mornings working with the top older sprinter Kimari, she is the horse to beat in the Schuylerville.

Coming out of short fields at Belmont Park, and likely as a very heavy favorite, I will take a shot to beat her. In Mainstay, I believe trainer Butch Reid has a very live candidate to get the job done.

You’ll remember that last summer, the veteran trainer brought Vequist from Parx to Saratoga to trounce the field in the Spinaway Stakes (G1) on her way to an Eclipse Award. Mainstay is Vequist’s half-sister, out of the Mineshaft mare Vero Amore.

One day after Happy Soul won the Astoria, Mainstay made her debut at Monmouth Park. The bay daughter of first-year sire Astern made the most of her unveiling, romping home by nearly eight lengths over a sloppy and sealed main track at Monmouth Park.

If you’re not familiar with Astern, the son of Medaglia d’Oro was a star sprinter in Australia who now stands at Darley America.

It was a very impressive debut for Mainstay, and one that might have been even better than it looks on paper. Not only did she win the 4 1/2-furlong race by 7 3/4 lengths in solid time and in hand, but she opened up by more than 20 lengths in the gallop out.

With six weeks between the maiden win and the Schuylerville, Mainstay has kept busy with a couple of workouts at her home base at Parx. Both workouts were bullets and then some. On June 23, she turned in a four-furlong move in :45.3, and then on July 3, she recorded a five-furlong work in :58.3. Working out faster than most horses will ever run, she looks primed and ready for a big effort on Thursday at the Spa.

In a field full of impressive maiden winners – Pretty Birdie, Pipeline Girl and Velvet Sister all also looked very good in winning their debuts – the Schuylerville should be an outstanding race. Happy Soul is the heavy favorite and one to beat, but I am going with Mainstay.