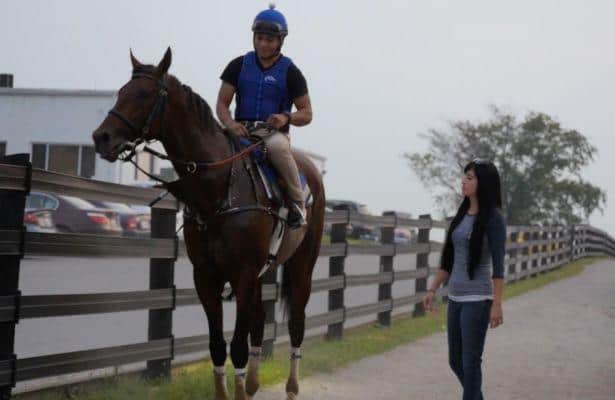 Runhappy was part of a handful of horses that came to Maria Borell at the beginning of April, courtesy of owner James McIngvale, and the young trainer has loved what she has seen in the 3-year-old son of Super Saver ever since. Now, after two easy wins under her watch, one at Indiana Grand and one at Ellis Park, the unheralded pair is ready to take their show on the road, testing the waters against top competition, and the spot they have found could not be much bigger.

As part of the huge August 29 Travers Stakes card at Saratoga, Runhappy will compete in the Grade 1 King’s Bishop. Arguably the nation’s premier event for 3-year-old sprinters, the big race is expected to draw such tigers as Holy Boss, Competitive Edge, and Mr. Z, but Borell believes in the first stakes horse of her career.

“He’s a really nice horse, and I expect him to run a good race,” said Borell. He was still green when he came to me, but he has improved a lot. He breaks now, and runs in a straight line. This is a really, really nice race, but he is going to run well. He is ready for the competition.”

Runhappy may not have been quite ready for his stakes try, when he faded to ninth in the Grade 3 Lecomte in January. That two-turn graded stakes attempt came after only one career start, an eye-catching maiden win at Turfway Park, and came for former trainer Laura Wohlers. Over a brief physical setback, and a little more experienced now, it has been all good for the bay colt since arriving to the Borell barn.

Runhappy was an easy winner of both tests under Borell’s care, on the mud at Indiana Grand, and on a fast track at Ellis Park. He used his sharp early speed to cruise to victory both times, each completed each in fast time, to raise his lifetime record to 3-for-4. Expect to see him out there doing his thing early in the King’s Bishop, as well.

“He will be on or near the lead -- it’s where he wants to be,” said Borell. “He got a lot out of the last one, and he is ready for this one. He has also learned how to relax on the lead.”

As usual, Runhappy flaunted his speed and readiness with his most recent work, when he drilled six furlongs on Tuesday at Borell’s homebase, the Thoroughbred Center training facility in Lexington, Kentucky, in 1:12.40. Actually, by Runhappy standards, the work was not all that fast, but looking at the other work times that morning, you can see just how comparatively fast it was.

Runhappy will be ridden in the King’s Bishop for the first time by Edgar Prado. The Kentucky Derby winning rider got on the colt for a recent work, and jumped at the chance to take the mount at Saratoga. He will be replacing the apprentice rider, Erin Walker, who was aboard for his two recent victories. No hard feelings for Walker, though, as she stopped by to feed the budding star mints this morning. Borell told me that Walker certainly could ride him again in the future.

For Borell, the King’s Bishop will be a homecoming of sorts. “Saratoga is where I first got up on a race horse,” said the former exercise rider and New York native.

When I asked her what winning a Grade 1 race there would mean to her, Borell explained that it could get emotional, “I don’t know. I would probably break out in tears. My mom and dad will be there, and a few friends. Dad has been a supporter for this whole ride.”

At the time of writing this article, both Borell and Runhappy were getting ready for a Thursday flight to New York, and then on to Saratoga in advance of their date with destiny in next week’s King’s Bishop. Win or lose in the big race, Runhappy and Maria Borell will be a pair to keep an eye on.