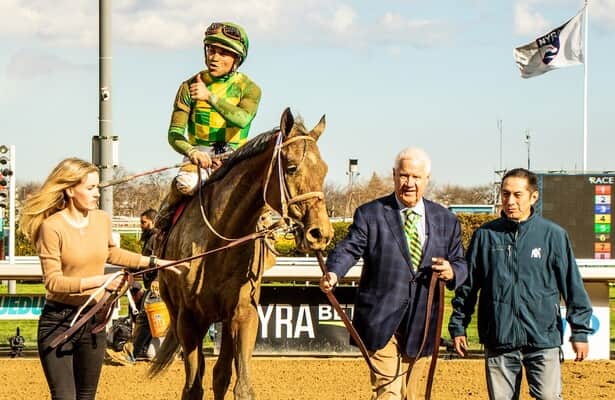 Their paths may have gone separate ways to begin the year, but Mo Donegal and Zandon were bound to meet again after their terrific stretch drive in last fall’s Grade 2 Remsen Stakes.

It’s on. The pair of talented runners will reunite in the big one as two of the principals in Kentucky Derby 2022.

Each colt punched his final ticket for the Run for the Roses in style Saturday with equally impressive runs to victory in important Kentucky Derby prep races.

The Todd Pletcher-trained Mo Donegal finished like a horse on a mission, running down a strong competitor in Aqueduct’s Wood Memorial (G2). A few minutes later at Keeneland, Zandon looked like the genuine article in running right by Smile Happy in the Blue Grass (G1).

When the Big A’s top 2-year-old race was run in December, I believed it to be the strongest Remsen in years. Both Mo Donegal, the winner, and Zandon, the tough-luck loser, ran big in a spirited and roughly run battle to the wire. The rest of the field was left far behind as the lightly raced colts showed their class.

They may have gone their separate ways this year, but their respective routes to a collision course May 7 have been remarkably similar.

Both colts wintered in South Florida and ran in two graded stakes this year in preparation for the Kentucky Derby. Mo Donegal remained there to run in Gulfstream Park’s Holy Bull (G3), and Zandon, a son of Upstart who is trained by Chad Brown, traveled to New Orleans to run in the richer Risen Star (G2) at Fair Grounds.

Neither colt could do better than third in his respective seasonal debut, but a deeper look into each prep revealed they performed very well as they were aimed to build a solid foundation for the Kentucky Derby.

The Donegal Racing-owned Mo Donegal ran first in the Holy Bull on Feb. 5. There he faced the strong competition of White Abarrio and Simplification. In a test probably a little shorter than ideal, the son of Uncle Mo was blocked at a key juncture of the 1 1/16-mile race. Forced to wait and then swing way outside while White Abarrio spurted away, he finished with a furious late run to just miss Simplification for second.

Two weeks later it was Zandon, owned by Jeff Drown, who had a similar fate in New Orleans. Breaking poorly in only his third career start, the Remsen runner-up was way off an easy early lead set by the talented Epicenter. Leaving him with little hope to ever catch the leader, he ran a big race to rally for third, just behind the highly regarded Smile Happy.

That rival would once again be favored over Zandon on Saturday in an 11-horse field, but this time Smile Happy would be no match for the talented Brown charge in the Blue Grass.

Ridden by Flavien Prat for the first time and well back early, the second choice unleashed a powerful rally that put him in contention at the head of the lane. From there, he powered right on by and drew off to a 2 1/2-length victory over a main track rated good.

It was an ideal kind of performance in prepping for the Kentucky Derby, navigating his way through traffic and finishing with gusto. Having run only four times, there still may be more under the hood of Zandon.

Mo Donegal also went north for his final prep four weeks before the Derby. While his was a much closer decision, he, too, gave every indication of being in prime shape four weeks out.

Within minutes of another talented runner from the Brown barn was left to his own devices on the front end, Mo Donegal, who was ridden by Joel Rosario for the first time, had to work out a trip from the rail in the nine-furlong Wood Memorial.

Steadily moving up between horses, he still had plenty to do when the field approached the Aqueduct stretch. His late run would prove irresistible, though, as Early Voting, who still was running strongly, could not hold off the powerful rally of the second choice.

In winning the Wood Memorial, Mo Donegal gave every indication of a horse who wants 10 furlongs.

Neither Mo Donegal nor Zandon is blessed with much early speed, but as we first saw in the Remsen and now has been validated through their Kentucky Derby preps of 2022, both horses have the talent to win on the first Saturday in May.

The classic distance of 1 1/4 miles only should help both of them, and after Saturday, we now know that each is coming up to the big race in fine fettle.

After 27 years of futility the Remsen might finally produce a Kentucky Derby winner. Mo Donegal and Zandon both have a big shot.