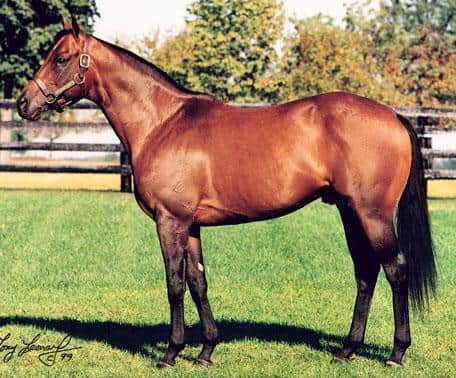 It is the end of an era. The sad news came in last week from the heart of Kentucky’s bluegrass. For more than two decades, Awesome Again had been an integral part of North American racing. First as a racehorse and then as a sire, the son of Deputy Minister was a constant face of excellence in the sport. His passing last Tuesday leaves a void in the industry as well as in the collective hearts of race fans.

The first time I knew of the handsome bay horse was while handicapping the Queen’s Plate of 23 years ago. It came just after the conclusion of a stirring Triple Crown series where Silver Charm had boldly battled his way to a near sweep of the series against the likes of Free House, Captain Bodgit, Pulpit and his Belmont vanquisher, Touch Gold. By mid-June of 1997, it was established that this crop of 3-year-old males was very good.

Then came Canada’s version of the Kentucky Derby. I remember thinking at the time that the Frank Stronach-owned and -bred Awesome Again had a ton of potential, but beating 13 much more experienced others at a mile and a quarter in a big race like this was probably too much to ask. I was wrong.

With only two maiden races at Hollywood Park in the month before the Queen’s Plate, where he finished a good third before a romping win, under his belt, the well-bred colt was ready for the big test at Woodbine. From the same connections as Touch Gold, the Ontario-bred newcomer ran a huge race in his third career start.

Trained by David Hofmans and ridden by Mike Smith, he took over the race at the top of the stretch and never looked back on his way to an easy victory. Suddenly, we could add the name of Awesome Again to the impressive and growing list of talented colts of this crop.

Having won Canada’s most prestigious race in his first five weeks of racing was pretty unheard of back then, so the buzz on him became big, and it only grew when he took home Saratoga’s Jim Dandy in style in his next start.

Perhaps finally showing some signs of having accomplished so much in such a short amount of time, Awesome Again’s rising star came back to earth, finishing third in the Travers as the favorite before a disappointing fifth in the Super Derby.

The impression the son of Deputy Minister had made so quickly in his 3-year-old season would be only a drop in the bucket compared with what he would do at 4.

Returning in the spring at Churchill Downs, Awesome Again won an allowance race for fun. Now trained by Patrick Byrne, his first race in nearly eight months had produced a seven-length victory. From there, it would be right back to graded stakes racing.

In his second race at 4, Awesome Again took down the reigning champ, beating Silver Charm by one length in the Stephen Foster. The victory was a validation of his class but also was a foreshadowing of things to come that fall.

After his Foster win, he rolled in three more stakes races. Each of his victories in the Whitney Handicap, Saratoga Breeders’ Cup and Hawthorne Gold Cup were popular and decisive, but none of them came against the best horses in an absolutely loaded older male division.

Despite coming into the Breeders’ Cup Classic at Churchill Downs perfect in five starts in 1998, the field was so deep and talented that the powerhouse three-horse entry of Awesome Again, Touch Gold and Coronado’s Quest were let go as the 9-2 third choice.

In a memorable stretch run, he would prevail by three-quarters of a length in an edition of the Classic which to this day is still considered the strongest field ever assembled for the Breeders’ Cup. Behind him in that great field were the dual classic winner and champion Silver Charm, Horse of the Year Skip Away, Belmont Stakes winners Touch Gold and Victory Gallop, as well as Grade 1 winners Arch, Coronado’s Quest, Gentlemen and Swain.

With nothing left to prove on the track, Awesome Again retired with a record of 9 wins from 12 lifetime starts. His big early win in the Queen’s Plate had been dwarfed by his perfect season at 4. Adena Springs, just outside of Lexington, Ky., would become his new home.

To say that Awesome Again was a successful sire clearly would be an understatement. Among his 75 stakes winners to date were countless standouts, such as Game on Dude, Ginger Punch, Oxbow, Round Pond, Paynter, Sir Winston, Wilko, Bravazo, Awesome Gem, Daaher, Dubai Escapade, Spun Sugar and Toccet.

Then there was Ghostzapper, arguably America’s most brilliant runner of the 21st century. The Horse of the Year of 2004 won only nine races, like his sire, but accomplished much in those victories, including a commanding win in the Breeders’ Cup Classic. He was dominant in distances from six furlongs to 1 1/4 miles and, perhaps most important, he now carries on the legacy of Awesome Again as a top sire.

Pensioned after last year’s final season of stud duty, Awesome Again took up residence a few months ago at Old Friends in Georgetown, Ky. where many great horses live out their lives. There the great horse joined fellow stars of that fantastic 3-year-old crop of 1997 Silver Charm and Touch Gold. After two careers of excellence, he was to spend his golden years as a cherished member of the famous retirement home.

Sadly, his time there was numbered, depriving fans of an opportunity to see the beloved horse one final time. An absolutely fantastic racehorse, and perhaps an even better sire, Awesome Again passed away on Tuesday, Dec. 15. He was 26 years old.

A horse never to be forgotten, I remember you, Awesome Again.