"Rachel Alexandra Raises the Rafters Here at the Spa!" 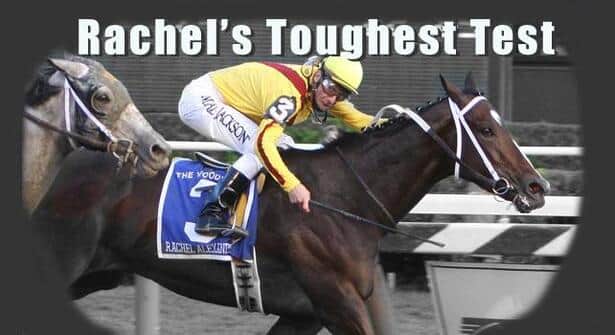 Two years later and I am still amazed at the splendor of the moment. As Havre de Grace nears her date with destiny and attempts to become the second ever female to win the Woodward Stakes, I can’t help but think back with appreciation for what I saw just two years ago.

The 2009 Woodward was one of the most intense and thrilling experiences I have ever witnessed in a lifetime of watching the races. Rachel Alexandra was nothing short of a hero to a huge crowd that crackled with electricity that afternoon at Saratoga, as she attempted something outside of the box - way out.

I can still feel the sharp emotions that coursed through my body throughout the day only to intensify to a fever pitch as the race drew nearer. It seemed that everyone shared in my feeling of the magnitude of the moment. We were all there to watch Rachel, and she would not disappoint.

This year will be a little different. Havre de Grace, while a wonderful filly, is older than Rachel was. She also does not carry the same special sort of magic that Rachel had going in 2009, but a win by her on Saturday would still represent something special, something a little Rachel like. I hope she does it, but it will not be easy, just as it was not easy for Rachel that day.

Yesterday was the day. The day that Rachel Alexandra’s amazing streak of victories would come to an end. She had won her previous eight races going back to her two-year-old season in the most impressive fashion possible without actually sprouting wings. America’s heroine was in for it. Fate was conspiring in insidious ways to stop Rachel from giving the people what they wanted. Here is what I mean:

1) The race was at Saratoga. This beautiful and historic race place is not called the ‘Graveyard of Champions’ for nothing. Man o’ War was upset, his only defeat, by Upset, forever changing the American vernacular for a big favorite going down. Secretariat, riding a high like no other horse in the modern era, left Saratoga with a bad taste in his mouth, defeated by Onion. Shocking defeats are commonplace at this idyllic but lethal racetrack.

2) She was facing older horses and more specifically older males for the first time. 3-year-old fillies simply do not win classic American races against the big boys. This was the first race that Rachel looked physically smaller than most of her opponents. She is a young girl racing men.

3) A sense of overconfidence was starting to set in. There was no reason to be overconfident against the best older males East of the Mississippi, but many onlookers do not realize that anything can happen especially when very good horses are underrated. It always scares me when too many people say that something cannot happen. It is the surest recipe for that very thing to happen.

4) The field was set and it did not seem to complement her running style. Da’ Tara was a rabbit. Past the Point has lots of speed. Cool Coal Man and It’s A Bird like to be close to the pace. All this pace against her, an uncomfortable inside post and every jockey in the race would be gunning for little miss Rachel.

5) The other horses seemed to have an affinity for the Saratoga strip. Macho Again, Bullsbay, Past the Point and Cool Coal Man had all proven to appreciate this track with their previous impressive performances. Rachel had never run here before.

6) The post parade was raucous. More than 31,000 people screamed their support for Rachel as she walked the stretch. She reacted to the screams with a bit of overzealousness that sent Calvin Borel flying off her back. Not a good sign for a racehorse who was about to be in for the race of her life.

7) Early fractions were fast and Rachel’s pace was pressured. Da’ Tara gunned for half a mile. Past the Point pressured her from the outside, Cool Coal Man was up close on the rail. Rachel was forced to run fast all the way under constant pressure. It should have been too much for any horse to handle. The horses that did try to run with Rachel early would drop like stones finishing up the track in the last three spots.

8) The path for the rallying Macho Again and Bullsbay seemed to part like the Red Sea. With the fast early fractions softening up the speed they were poised for big rallies and they were firing their best shot. As they made their moves, they faced clear sailing with no impediments, as they pounced on Rachel.