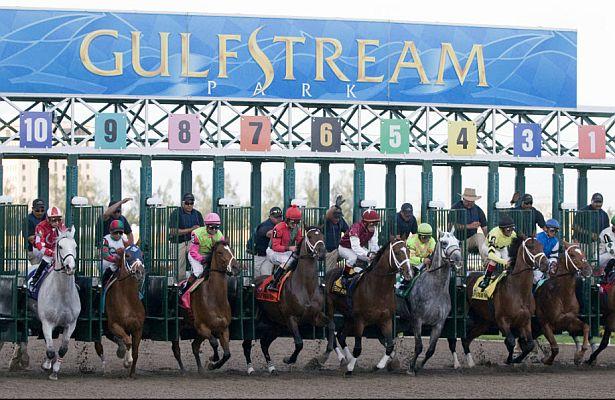 There’s no better place for seeing promising just turned three-year-olds than Gulfstream Park. You never know when a good one or two will pop up at the South Florida oval, and Friday’s ninth race looks like a prime example. A field of eight young males are set to test their talents going nine furlongs in an allowance/optional claimer, and several appear to have potential to become stakes performers. Lest we forget, this is the exact type of race where Kentucky Derby winner, Orb turned the corner last January. Let’s take a look at the field from the rail out…

Cousin Stephen (Proud Citizen - Gallant Dreamer, by Belong to Me) A winner of 1-of-2 for trainer, Chad Brown, this colt didn’t show much in his career debut after getting squeezed at the break, but bounced back nicely two months later. Donning blinkers for the first time, Cousin Stephen blitzed a field of maidens going nine furlongs at Aqueduct. The son of the 2002 Kentucky Derby runner-up, showed improved early speed as he stalked the leaders before dominating down the lane. The third place finisher, beaten more than eight lengths, came back to break his maiden in his next start. Any improvement Friday under Javier Castellano makes him one of the horses to beat in here.

We're All Set (With Distinction - True Glitter, by Robin des Pins) With seven starts, including three stakes races, under his belt, this Florida bred is the most experienced colt in the field. Despite that, it looks like anything more than a minor award would be a real surprise for this stretch runner.

Solemnly Swear (Yes It's True - Sala de Oro, by Expelled) He took some action in the Grade 3 Iroquois in his last start, but could only manage a well beaten eight place finish that evening. He does boast a big win over one of the more interesting horses in the field at Monmouth Park, but even a return to that effort might not be enough on Friday.

Hy Kodiak Warrior (Kodiak Kowboy - Aheadnotatail, by Unbridled)– From the first crop of crack sprinter, Kodiak Kowboy, this chestnut has done nothing but run well in five career starts. Interestingly, all five of those came at Gulfstream, and in his last race there, he gave a very good account of himself against the highly regarded Coup de Grace. Off his figures, he certainly fits with these, but the stretchout to nine furlongs may well be his undoing.

Top Billing (Curlin - Parade Queen, by A.P. Indy) – If you haven’t yet heard of this one yet, you can read about his career debut here. It’s hard what to make of a sloppy maiden race at Laurel Park, but visually he looked like the real deal. That eye pleasing start to his career, combined with impeccable bloodlines have me very interested to see what he can do from here on. Having said that, he makes a huge jump in class, as well as distance, and Gulfstream is no place to drop way back early. He need not win this to have a big future, but he may just be good enough to make it 2-for-2 for trainer, Shug McGaughey.

Commissioner (A.P. Indy - Flaming Heart, by Touch Gold)– Speaking of a strong pedigree, this WinStar owned and bred, and Todd Pletcher trained colt is a half-brother to Laugh Track. After lagging in last for much of his career debut, he did show good late interest to rally for second to Solemnly Swear, albeit a distant second. He came back nicely a few weeks later to win a doozy of a maiden race at Saratoga, in which he defeated Souper Lucky by a head with the rest of the field a pole farther behind. Freshened since, he has a series of works in South Florida under his girth, and truly could develop into any kind.

Ichiban Warrior (First Samurai - Shoo In, by Dynaformer) – Another trained by Todd Pletcher, this colt was dropped in for a tag in his second start and promptly won for fun over Keeneland’s Polytrack. Proving that he was no claimer, he ran a solid second in the Street Sense Stakes against several promising colts in start number three, and then followed that up with a romping win in a conditioned allowance at Churchill. While fast, that latest win came only at 6 ½ furlongs, so the nine furlongs of this race is a major question. If he handles the two-turns, he could be tough in here for Ken and Sarah Ramsey.

Ease on Bai (E Dubai - Ez Mover, by Meadowlake)– Nick Gonzalez, of River Seven fame, brings down this Canadian shipper for his first race in the U.S. A winner of 1-of-6 on Woodbine’s synthetic surface, his only victory came in maiden claiming, so unless he improves plenty first time on dirt, he looks like only an afterthought in here.