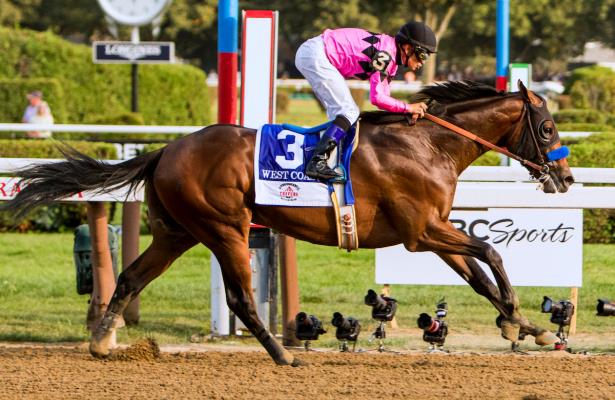 With a large purse, a last chance to run against only three-year-olds, and an advantageous timing before the Breeders' Cup, the $1 million Pennsylvania Derby has positioned itself to be one of the biggest races for sophomore males after the Triple Crown. It still may not carry the prestige of the Travers, or even the Haskell, but the signature race at Parx is becoming an important event of early fall. In this year's edition, some of the best colts in the nation will try to bolster their Eclipse Award hopes, as well as getting in one last proper prep for the Breeders' Cup Classic. Without further ado, let's take a look at the field in the 9 furlong Grade 1, including my analysis and projected odds ...

5) Irap (4-1) - While Doug O'Neill had two great choices for this race, in Pavel and Irap, he likely has the one most ready to win on Saturday, running. Irap came up just a little short last time after a menacing move on the turn, going ten furlongs at Saratoga, but this spot should suit his talents better. Much like he did in against weaker in the Indiana Derby, I look for him to pounce on the turn and keep on going down the lane. I like the son of Tiznow best of all to win this one, which would be his fourth graded stakes win since taking the Blue Grass as a maiden. The Top Pick

4) West Coast (8-5) - After his decisive victory in the Grade 1 Travers Stakes a few weeks ago at Saratoga, the winner of three straight stakes comes in as the favorite, and the one to beat. The streaking son of Flatter certainly could win again, and validate his position as the top 3yo dirt horse in the land, but there are a few things to keep in mind. In the Travers, he got a perfect trip, showing speed from the inside, while going all the way in fractions less than overwhelming. Also, this season has been anything but consistent among this bunch. A Deserving Favorite

8) Irish War Cry (5-1) - Do not forget about this three-time stakes winner. The New Jersey-bred son of Curlin has not been a model of consistency this year, but he has managed two impressive wins in the Holy Bull and the Wood Memorial, not to mention a brave second-place finish in the 12-furlong Belmont Stakes. He's had a nice gap since fading to fourth in the Grade 1 Haskell last time, and looks to be coming up to this race in fine form for trainer, Graham Motion. Keep in mind, the Haskell had a very contentious early pace, and he was the one to hold on best of those who pressed that pace. Dangerous J-bred

10) Giuseppe the Great (12-1) - A consistent sort for trainer Nick Zito, he is another who exits the Travers. He could do no better than sixth in the Mid-Summer Derby, but cutting back at 9 furlongs, might be the ticket for the Lookin At Lucky colt. He was good enough to rally for second against good horses in both the Woody Stephens and Jim Dandy previously. With a strong pace in front of him, he could be primed for a solid effort in here.Can Pick up the Pieces

1) Timeline (6-1) - He may have failed in the Haskell, but there should be little doubt that this Chad Brown-trained colt has plenty of talent. The son of Hard Spun may have shown his limitations at Monmouth, in that fifth-place finish, but undefeated before that, he should be given another chance against top competition. Once again, expect him to flash plenty of early pace in a race that does not lack for speed. Needs to Bounce Back

2) Outplay (10-1) - Has not been seen since making all the running in the Curlin Stakes at Saratoga in late July. It was a step forward for the son of Bernardini, after fading behind West Coast in the Easy Goer, the race before. Given plenty of time since that solid effort, he could be an interesting runner in here, if he can take another step forward. Still, there is serious quality speed in this field, so I'm not sure this race sets up well for his major race breakthrough. Rested Since Stakes Win

3) Watch Me Whip (20-1) - He's been scratched out of a few races since losing the Indiana Derby, in which he finished fourth. Trained by Dale Romans, he certainly deserves to be a longshot in this one, but I've felt all along that he has some talent. This seems like a tough spot to make a splash, but if you are looking for crazy odds in your exotics, this one could run a better race than expected on Saturday. Better than He Looks on Paper

7) Game Over (20-1) - The improving Loooch runner continued to show upward mobility last time when second in the West Virginia Derby. A son of Mineshaft, he's still only had four lifetime starts, so further improvement can be expected. The problem on Saturday is that he's found a much tougher test than he faced last time at Mountaineer. One to keep an eye on down the road, but probably not in this one. Lightly Raced Talent

6) Talk Logistics (20-1) - The Florida-bred had a nice prep for this when he rallied for second in the Smarty Jones at Parx. Having said that, he was absolutely no match for the winner, Pavel, that day. It also marked his fourth consecutive runner-up finish. Finishing second against this bunch looks a bit out of his grasp. A Bit Overmatched

9) Term of Art (30-1) - Since finishing his juvenile season with a greaded stakes win on the grass, this son of Tiznow has had numerous chances against good horses this year. He has not been able to get it done, and I see little reason to expect better on Saturday. Perhaps some class relief would be prudent.  The Outsider