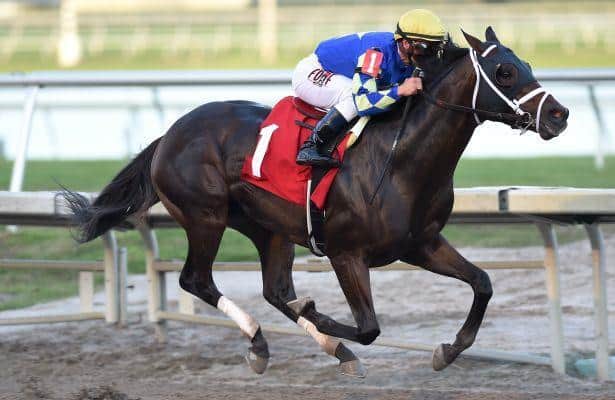 With an average age of 5.33 years, the inaugural edition of the Pegasus World Cup will bring together an experienced group of older males to Gulfstream Park. Of course, California Chrome, North America’s all-time leading money winner, needs no introduction at the age of six. We have also become quite familiar with his young vanquisher in the Breeders’ Cup Classic, Arrogate. The smashing winner of the Travers is not the youngest horse in the field, however. That honor falls to the Starlight Racing owned Neolithic. Not a household name by any means, the question begs … just who is Neolithic?

There is a good reason that he is one of the more unknown names in the big race. Not only is Neolithic the youngest horse in the field, he will not celebrate four years on this earth until April 24, but he also has the least stakes seasoning among the bunch, having run in a grand total of one stakes race in his brief career. Purchased for the near princely sum of $460,000 as a yearling in 2014, Neolithic has made only seven lifetime starts, with his only two wins coming in a maiden race, and an allowance race.

The son of Harlan’s Holiday, out of a multiple stakes winning Victory Gallop mare, Swingit, Neolithic actually began his career back in 2015, when he raced two times as a juvenile. After an inauspicious debut, finishing seventh at 25-1 in a Belmont Park maiden in October, he was shipped to Florida. He made his Gulfstream Park debut in his second career start, and he demonstrated big improvement for trainer Todd Pletcher. Rallying from sixth, he moved past a pair of good horses in the stretch, in Majesto and Gettysburg, to win the 8 ½-furlong maiden race. That victory in mid-December would be his last start for nearly eight months.

Returning from the layoff at Saratoga, Neolithic broke poorly in a tough seven-furlong allowance race, but finished with a flourish to be second in a fast race. Looking like a horse full of potential, he came back four weeks later in another allowance at the Spa, this time as the favorite and after another poor beginning, did little, and floundered home in seventh. Brought to Belmont for his third race off the layoff, he once again was off a bit slow in an allowance race, and did show signs of life, but could only manage second. An improvement, but hardly where they wanted the horse that cost nearly half a million to be.

Seemingly going nowhere fast, the well-bred horse with talent needed a change. His Hall of Fame trainer added blinkers for the Grade 3 Discovery Handicap at Aqueduct on November 12 and it seemed to do the trick. Showing more speed than ever before, Neolithic broke sharply, and ran a big race to finish second as a longshot.

Off that strong performance, Neolithic was once again shipped for a winter in Florida. Now it should be noted that Jack Wolf of Starlight Racing, the owner of Neolithic, has been a big supporter of the world’s richest race since the beginning. Not only was he one of the initial investors to put up the million-dollar buy in, but he also was named CEO of the Pegasus World Cup last year. Here he is talking with Caton Bredar after Neolithic’s big allowance win.

Could Neolithic be headed for the Pegasus World Cup? @CBredar chatted with owner Jack Wolf after his big effort Wednesday at Gulfstream! pic.twitter.com/ep7MuCmwHs

So, with Starlight Racing looking for the right horse to occupy their place in the starting gate, along came Neolithic making big strides of late. On December 14, two days past the anniversary of breaking his maiden, the dark bay colt ran too good to ignore.

Impressive. Is it enough to threaten the likes of California Chrome and Arrogate on January 28? Only time will tell, but at least now you know a little bit more about Neolithic and his entry into the Pegasus World Cup. Oh and by the way ... while 0-for-5 everywhere else, Neolithic is 2-for-2 at Gulfstream Park.

#Neolithic worked 5F towards the @PegasusWorldCup for @StarlightRacing & Todd Pletcher!