Do Patternrecognition, Leofric stack up in Pegasus World Cup? 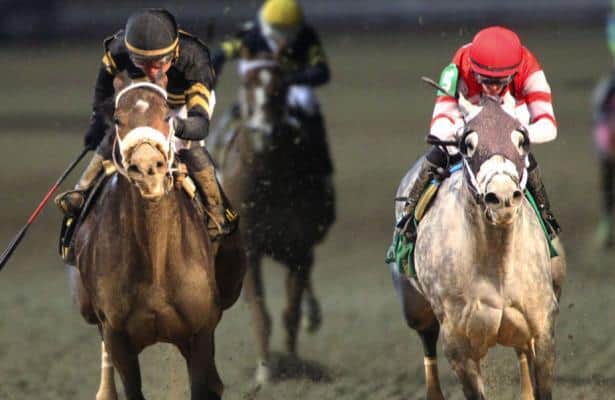 Experience proved to be key for Accelerate in 2018. The 5-year-old son of Lookin At Lucky was a nice horse at ages 3 and 4, but a cut below the level needed to contend for a championship. Things changed this year, as a mature version of Accelerate dominated his competition, won on the big stage, and is now on the verge of at least one Eclipse Award.

Clearly a case of a very good racehorse getting better with age, the Breeders' Cup Classic winner now awaits his swan song before a new career begins as a stallion. Accelerate's final appearance will come in the $9 million Pegasus World Cup on Jan. 26. There, he will find new competition at Gulfstream Park hoping to emulate his rise. Among them are likely to be a pair of older horses who are also just now hitting their best stride.

In the two biggest dirt races post-Breeders' Cup, the Clark Handicap and the Cigar Mile, Leofric and Patternrecognition respectively announced themselves as major new players in the older dirt male division. They did this despite their respective breakout wins not coming until the end of their own 5-year-old seasons.

Or, perhaps "despite" is not the right word. Much like Accelerate, these two have certainly improved with maturity.

While neither horse is confirmed for the Pegasus, the third renewal of the 1 1/8-mile race would mark a very logical next step for both.

“The owners and I talked about the Pegasus last night. It’s definitely a consideration,” remarked trainer Chad Brown after his charge, Patternrecognition, went gate to wire in Saturday's Grade 1 Cigar Mile.

Meanwhile, Brad Cox, the trainer of Leofric said, “The Pegasus is something we can look at. I don’t want to run him just to say I have a horse in there. It will have to make sense moving forward. We’ll just have to see how he develops over the next month or two.”

These are two of the top young trainers in the world, and their caution to jump right into the Pegasus fray should be respected. Much like the patience they have displayed in guiding the respective careers of these two new Grade 1 winners, they are weighing what is best for their horse before committing to the richest race in America.

A comparison of Beyer Speed Figures for the Breeders' Cup Classic and the Cigar Mile might lead you to believe that Patternrecognition is ready for the test. Having only made his graded stakes debut two starts ago while winning the Kelso (G2), the son of Adios Charlie earned an identical 105 figure in winning the Cigar Mile as did Accelerate in the Breeders' Cup Classic.

Pretty heady stuff for a horse who did not even make his stakes debut until September of his 5-year-old season. Beset by physical setbacks, his career debut did not come until he was 4. Winning his first race in style in April at Aqueduct, Patternrecognition proved not quite ready for prime time by running second best against talented competition in each of his next four starts.

Undaunted, he finished off his first season on the track with an impressive win, also at Aqueduct. At 5, he made it back to the races in the spring and has improved with each and every start. He's now finished first or second in 10-of-11 career starts and, about to be 6, his best may be still to come. His Kelso win at Belmont was strong, and his Cigar Mile was grade 1 validation of his continued improvement.

Leofric, on the other hand, has had quite a bit more stakes experience than Patternrecognition. A winner of 8-of-14 lifetime, the son of top sire Candy Ride began his career in late summer of his 3-year-old season, though he did not make it to the winner's circle in three tries. As an older horse, he relocated to Cox's barn and has won 8-of-11 while never finishing out of the money.

A winner of three straight to begin his 4-year-old season the gray horse missed some time before returning last December for his stakes debut. A rallying third in the Tenacious Stakes at Fair Grounds in his first off the layoff set him up well for what he's accomplished in 2018.

In fact, he's run in five graded stakes races this year. A third in the Grade 1 Woodward, and a second in his graded stakes debut in the Razorback are his only blemishes on an otherwise perfect season. Two nice allowance scores are part of his five-win season which also includes the Grade 3 West Virginia Governor's Stakes and the Grade 2 Fayette Stakes, as well as the recent win in the Clark.

In both of his last two, the Fayette and the Clark, Leofric demonstrated a gritty desire to win in tough races against solid competition, but like Patternrecognition, we still do not know how he will fare against the very best.

While it's true that both defeated some Breeders' Cup competition in their latest -- Bravazo and Seeking the Soul for Leofric, and Mendelssohn for Patternrecognition -- it remains to be seen how they will stack up against the likes of Accelerate … or City of Light, Gunnevera, and Audible, for that matter.

One thing is for certain: Both Patternrecognition and Leofric have become serious race horses later in their careers, and have never been better than they are right now. Neither was rushed, and they have blossomed at a stage when most Grade 1 winners are long since in the breeding shed.

Have they improved to the point where they can now succeed against the very best? We may find out next month in the Pegasus, and remember, we were asking the exact same thing about Accelerate not all that long ago.