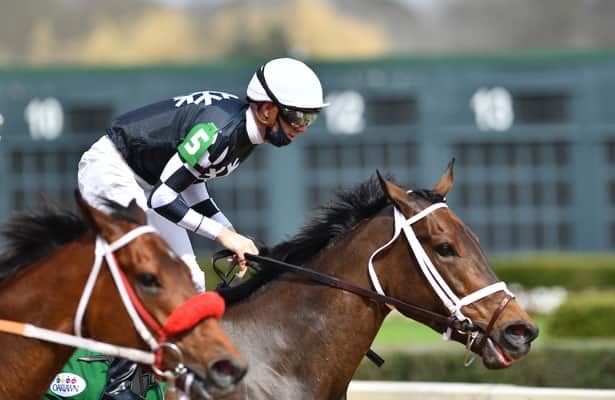 As the late, great comedian Rodney Dangerfield liked to say, “I don’t get no respect.” Shedaresthedevil must know the feeling. Running next in Saturday’s Locust Grove Stakes (G3) at Churchill Downs, she has struggled for recognition.

Despite a decisive win over Swiss Skydiver and Gamine in the Kentucky Oaks last September, which joined other graded stakes victories in the Honeybee (G3) and Indiana Oaks (G3), Shedaresthedevil often played second fiddle in 2020.

Whether it be in the division, overshadowed by the fillies she beat in the Kentucky Oaks, or in her own stable, behind the great race mare Monomoy Girl, the Brad Cox-trained filly never was the big horse.

Little has changed for Shedaresthedevil this year.

This time around, it is Letruska who has been the headliner of the older female division, while stablemates Essential Quality and Knicks Go have been the stars of the Cox barn. All three have earned the buzz and are deserving of the attention, but what about Shedaresthedevil?

All the 4-year-old daughter of Daredevil has done in 2021 so far is win two Grade 1 stakes and one Grade 2 stakes race and finish third in another Grade 1. Those four starts to begin her season have validated her victory in the Kentucky Oaks as one of America’s best.

Moreover, while Letruska has steamrolled the Eclipse Award talk with four consecutive graded scores, Shedaresthedevil is the only horse to have beaten her this year. That victory came in the Azeri Stakes (G2) at Oaklawn Park in her seasonal debut.

Letruska evened the score with a powerful victory in the Ogden Phipps (G1) at Belmont Park and has been magnificent ever since her lone loss this season, but Shedaresthedevil has been no slouch either.

She earned the second Grade 1 victory of her career in the Fleur de Lis at Churchill Downs on Kentucky Oaks day before running third in the Phipps. Most recently the filly, owned by Flurry Racing Stables, Qatar Racing Limited and Big Aut Farms, ventured to California for the first time in her career.

It was a calculated move by her connections to get the classy bay filly a start in at Del Mar, the host of this year’s Breeders’ Cup, and a main track where she lost in her second career start. Bouncing back from her only loss of the year, she gave weight and trounced her California competition in the Clement L. Hirsch Stakes (G1) on Aug. 1.

Comfortably stalking the early pace, Shedaresthedevil waited for rider Florent Geroux to ask for her best, and when he did, she responded in kind, easily putting away her rivals. A win-and-you're-in qualifier for the $2 million Breeders’ Cup Distaff on Nov. 6 at nine furlongs, it was the perfect race over the Del Mar track for the winner.

The victory, her sixth graded-stakes score and third in a Grade 1 race, pushed her past the $2 million mark in career earnings. A winner of seven of her last 10 races, we now know that Shedaresthedevil can handle the trip and the track.

First will come this Saturday’s Locust Grove at Churchill Downs. The site of her biggest career win to date, she likely will be a heavy favorite against a field that does not include Letruska. Undefeated in four career starts there, anything other than a victory would be a disappointment.

After splitting decisions earlier this year, Letruska and Shedaresthedevil have gone their separate ways. While the former has deservedly become racing’s darling, don’t forget about her top rival.

With a rubber match in the Breeders’ Cup Distaff looming, Shedaresthedevil might be on the verge of finally getting the respect she deserves.