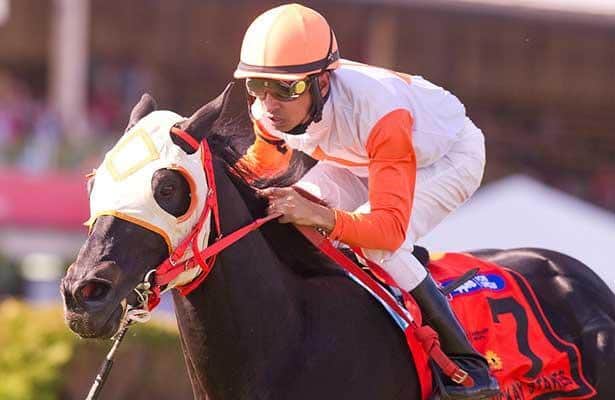 33 lifetime starts - 22 wins. On the grass, he has run 21 times, with 14 victories. These are not the numbers of mere mortals. Like a fine wine, or like an aged cheese in the hands of a master, Ben’s Cat only gets better with time. If you thought the turf monster had been a force on the green grass of some of America’s shortest races in year’s past, get a load of the seven-year-old version. Once again proving that he belongs on a very short list of the best turf sprinters in the land, Ben’s Cat pounced today on Tightend Touchdown down the Parx stretch to win the $200,000 Parx Dash going away at the wire.

The Parx Dash, a five furlong turf test, received graded status for the first time this year, and with heavy hitters, Ben’s Cat, Tightend Touchdown, and Bridgetown in the field, it lived up to its status. As nice as the latter two sprinters may be, however; today it was all about King Leatherbury's gelded homebred. Having already won three-of-four over this turf course in the past, including two editions of the aptly named Turf Monster, Parx has been good to Ben’s Cat. Going in as the defending champion of the Parx Dash, the Maryland based son of Parker's Storm Cat signaled his readiness for today’s Dash, with three excellent efforts to kick off his 2013 season.

Ben’s Cat easily dispatched of his opponents in a pair of Pimlico stakes, the Mister Diz and the Turf Sprint on Preakness weekend, but it was in his lone loss this year that really demonstrated that Ben’s Cat was as good, if not better, than ever. In the rich Pennsylvania Governor’s Cup, he was checked sharply early in the race and dropped hopelessly behind the salty field. His strong and very wide run may have fell well short of the same two horses he needed to beat today, but just to get third that day was a fantastic effort. Because of the loss, though, and due to the fact that the race winner, Tightend Touchdown, had rolled to a front-running 5 1/2 length score in a eye-catching time of :54.62, Ben’s Cat would not go favored today.

No matter, under regular rider Julian Pimentel, Ben's Cat was content to sit fifth early, well off the lively early fractions set by long shot, Wild Memories. By the time the six horse field hit the far turn, Ben’s Cat was starting to roll, but still had plenty of work as the race favorite and Bridgetown began to move in on the leader. Early in the lane it looked for just an instant that Tightend Touchdown might have gotten the jump on the late run of Ben’s Cat, but the seasoned veteran would have none of that. This time, with a perfect trip, he quickly inhaled the new leader and motored right on by to win by 1 ¼ lengths in :59.43.

Ben’s Cat has won again. What else is new. That’s pretty much all he does. Have I mentioned his career record lately?