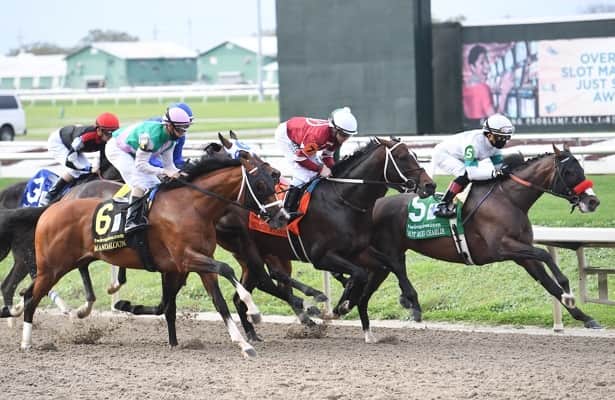 It’s been eight years since Orb came from way back to win a sloppy edition of the Kentucky Derby. Relaxed early, the powerful son of Malibu Moon rolled home on the outside to a decisive 2 1/2-length victory under Joel Rosario. The popular win for the 5-1 favorite gave Hall of Fame trainer Shug McGaughey his first victory in the world’s most prestigious horse race.

Orb’s son, O Besos, certainly will not go favored when a full field of 3-year-olds line up for this year’s run for the roses on Saturday, May 1. Trained by Greg Foley, he likely will be bet more in the neighborhood of the 34-1, which were Golden Soul's odds when he finished second to Orb in 2013.

Like Golden Soul, O Besos comes to Churchill Downs off a defeat in the Louisiana Derby (G2). Sent off as a 28-1 long shot in last month’s $1 million Kentucky Derby prep at Fair Grounds, he outran his odds with a strong rally up the rail to finish third behind the front-running victory of Hot Rod Charlie. One more jump, and the late-running chestnut probably would have taken away second from Midnight Bourbon.

The impressive run in the 1 3/16-mile Louisiana Derby not only points out O Besos as an improving colt, but also one that will have no problem in handling the demanding 10 furlongs of the Kentucky Derby. Still, don’t look for him to be anything but a long shot on the first Saturday in May. He has all the ingredients of big odds.

Like Shug McGaughey of eight years ago, Greg Foley will be looking for his first victory in the big one. Far less known than the Kentucky Derby winning trainer of 2013, the longtime Kentucky trainer had his first starter in the Run for the Roses last year but could do no better than a middle-of-the-pack finish with Major Fed.

As for the rider of O Besos, Marcelino Pedroza also is a relative unknown. The native of Panama has been a mainstay at Indiana Grand in recent years, where he has been the leading jockey. A winner of more than 1,100 races, he rode O Besos in both of his stakes tries, but he has never ridden in the Kentucky Derby.

Out of the Soto mare Hugs and Kisses, O Besos has won two of five lifetime starts. He began his career at Churchill Downs. Sent off just a shade below 50-1 in his career debut, he looked the part of his odds for much of the race. He broke poorly and languished in last early in the 6 1/2-furlong sprint. Still way back as the field turned for home in the late November maiden special weight, he finished with good energy on the sloppy track and checked in sixth, beaten just over 5 lengths.

With a solid late run shown in his debut, O Besos was ready to display real talent. Taken to New Orleans for the winter, he scored two consecutive easy wins while rallying in sprint races. The first came in a 5 1/2-furlong maiden special weight, the second in a 6-furlong allowance race.

The two-race winning streak in December and January led to a bump up in class and in distance. Having only sprinted in his first three, O Besos rallied in the 11-horse field of the Risen Star (G2) but was a little flat down the stretch, ultimately checking in fourth. Clearly, he improved on that effort in his next start, the Louisiana Derby.

Back at Churchill Downs, O Besos has been working well for the big assignment. On Tuesday, he turned in a solid 5-furlong breeze in 1:00.60. Owned by the group of Bernard Racing LLC, Tagg Team Racing and West Point Thoroughbreds, he should be ready to run his race on May 1.

The plan for the Derby is as it should be – let the late-running O Besos do what he does best. He will sit near the back of the pack early and make one late run. If the pace is strong – which it could be considering the number of horses with early speed listed as likely – it will help this long shot. It will just be a question of how many horses he can run by in the final few furlongs.

Can O Besos join long shot late runners of the past such as Canonero II, Gato Del Sol, Ferdinand, Giacomo and Mine That Bird? Only time will tell, but in this year’s wide-open Kentucky Derby, you'd better believe that he is one long shot that will be on all of my tickets.