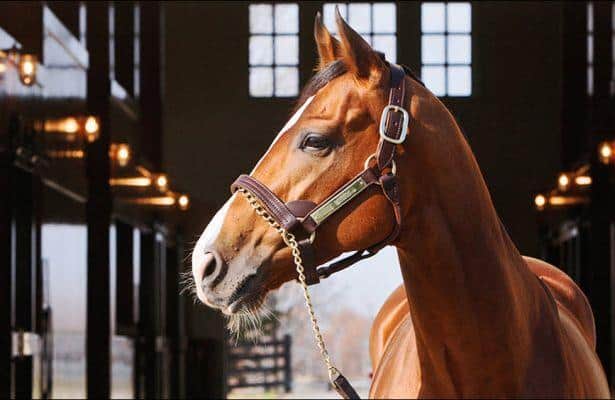 Once upon a time, American breeders were looking for a new bloodline to invigorate our domestic efforts, and Bull Hancock of Claiborne Farm thought a strong European runner named Nasrullah might just the fill the bill. Hancock went after the big bay in a big way, and in 1949 he succeeded in importing the topnotch son of the great Nearco. At the time, there was very little Nearco influence in the United States, and in his Irish-bred son, Hancock saw a stallion prospect that he wanted badly to stand at Claiborne.

Hancock was right. The expensive European import went on to become one of the most important sires in the history of American breeding. Five times the leading sire in the United States, among Nasrullah’s many top sons included a pair of Hall of Fame runners in Nashua and Bold Ruler. While Nashua went on to become a solid sire, it was Bold Ruler who outdid his excellent racing career in the breeding shed. The son of Nasrullah took right up where his sire left off, and was America’s top sire an amazing seven straight years. Among his 11 champions, included the immortal Secretariat.

It’s been 65 years since Hancock was able to secure an Irish-bred that would change the course of American breeding, and now we are at a time when our domestic efforts, by most accounts, are in need of another revitalization. Too much speed, without staying power, and too much frailty, are consistently heard complaints, when discussing the state of breeding in the United States. American breeding needs a Nasrullah for the new generation, and a recent acquisition by Lane’s End Farm has a chance to be the answer.

As a racehorse, it was nearly impossible for Noble Mission to escape the massive shadow cast upon him by his full brother -- the incomparable Frankel. 0-for-1 as a juvenile, Noble Mission (Galileo - Kind, by Danehill) would improve each season. A stakes winner at both three and four, Frankel’s little brother took things up a notch, or two, in 2014 for trainer, Lady Cecil.

In the spring and summer, Noble Mission accounted for four consecutive group stakes, including the Group 1 Tattersalls Gold Cup in Ireland and the Group 1 Grand Prix de Saint-Cloud in France. It was his final race of his career, and his third Group 1 victory of the year, though, where he became a champion. His determined victory in the QIPCO Champion Stakes at Ascot demonstrated both his talent and heart, but more than that, it was the culmination of an impeccably bred horse’s durable career, and continued improvement. Noble Mission was no longer "the brother of Frankel", he had earned himself the title of "Champion Older Horse" in Europe.

An excellent runner, the son of a European great, and now he is coming to America. The parallels between Noble Mission and Nasrullah are apparent, and it starts with their respective sires.

Like Nearco seven decades before, Galileo possesses some very special bloodlines. A champion in Europe, Galileo has carried on the great success of his sire, Sadler’s Wells, and undoubtedly has become the world’s best sire. And also like Nearco, Galileo blood is currently less than prevalent in the United States. While American breeders are now working hard to bring Galileo blood inside our borders, it is Noble Mission who provides the greatest potential for a good old fashioned game changer.

Not only is his dam, Kind, the producer of two champions, but she also brings wonderful bloodlines to the table. A daughter of the outstanding sire, Danehill, Kind is also the half-sister to a top grass horse very familiar to American racefans, Powerscourt.

The stallion register will say that Noble Mission will stand for his first breeding season at Lane’s End Farm for a stud fee of $25,000, but that could be only a footnote years from now if the regally bred, durable, and classy import can mean half of what the infusion of Nasrullah blood meant to American breeding 65 years ago.

-Recommended reading on Nasrullah ... Secretariat: The Making of a Champion by William Nack (1975)