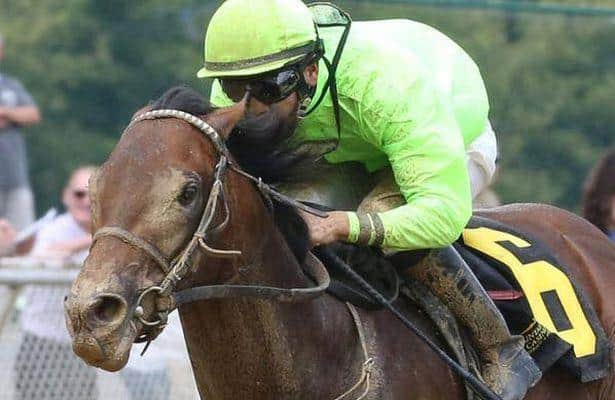 Nine months out is surely way too early to talk Kentucky Derby. Then again, the Run for the Roses can do funny things to people - even perfectly rational and level-headed people like me. *cough-cough* Today at Mountaineer Park, of all places, I discovered the first juvenile in which I am truly excited. Hashtag Bourbon is officially the first horse I will place on my 2015 Kentucky Derby list. Yes, I like him quite a bit.

The CliffsNotes version of his win today goes like this … Hashtag Bourbon rallied strongly to victory in the $100,000 Mountaineer Juvenile Stakes, but within, I saw much more. Off at odds of 7-2, the win today was no real surprise, but the manner in which he did it was most impressive.

In his career debut, he missed the break in a key maiden race at Churchill Downs, but motored down the lane to finish third. Today, he demonstrated that he is learning his lessons taught by Kellyn Gorder and team, and broke from the gate in stride with the rest of the seven-horse field. Still, he showed no hurry early under Brian Hernandez, Jr.

Moving smoothly and confidently to the outside, the pair watched as race favorite Gotta Get Paid and Super Siete went right to business on the front end, getting the first quarter in :22.17 seconds. Gotta Get Paid put that one away on the turn after reaching four furlongs in 45.99. By then, though, Hashtag Bourbon was moving fast on the outside with little urging from his confident rider.

His bid from outside on the far turn looked like it was destined to be a winning move, and sure enough it was. Hashtag Bourbon galloped down the lane to an easy as he pleased 4 ½ length victory, while Gotta Get Paid gamely held second, clear of third place Duff, who was 1 ½ lengths farther back. Hashtag Bourbon covered the six panels over a fast main track, but one not exactly yielding blistering times, in 1:11.45.

I know what you are thinking … that is all fine and good, but a six furlong stakes winner at Mountaineer is really going to make it to the Kentucky Derby?

It may be a bit of a long shot, but this bay colt really looks like a runner to me. Unlike many juvenile hotshots, he does not give the impression of precociousness, but rather of a horse of real quality that will only get better with more time and more distance. Owned by Bourbon Lane Stable, Hashtag Bourbon is a son of Super Saver. You remember him. Not only was he the winner of the 2010 Kentucky Derby, but with three sharp winners in the past week, he is now a red-hot freshman sire.

The sharp folks at Bourbon Lane snatched up Hashtag Bourbon this March at the Ocala Breeders Sale for what now seems like a bargain of $130,000. Yes, Kentucky is a long way down the road, but unless I’m completely wrong about this one, Hashtag Bourbon should be trending on Twitter before too long.