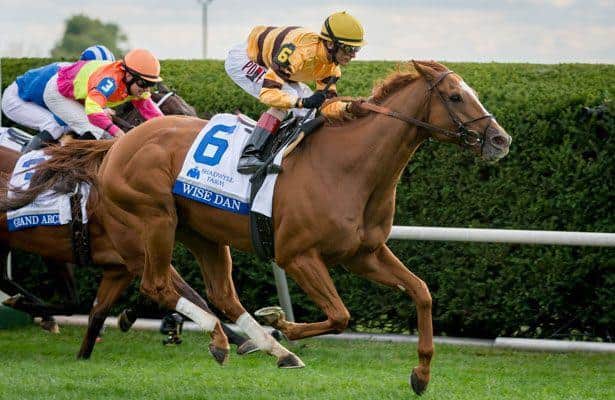 January - General a Rod in the Gulfstream Park Derby

What a way to kick off the year. They may not have been the very top 3-year-olds of the excellent sophomore crop of 2014, but when General a Rod and Wildcat Red came together, they put on a show. None of their matchups were better than this New Year's Day thriller. They hooked up on the far turn, and battled nose-and-nose all the way to the wire, with only the finish line able to put a end to this donnybrook.

This was how a great champion should go out. Groupie Doll is one of the great female sprinters of the last quarter century, and it was only fitting that after a loss in the Cigar Mile, she get one more chance to end her racing career as a champion should. It was perfect. She may have started slow, but she finished fast ... very fast. This one had me standing in my living room and cheering.

March - Game On Dude in the Big Cap

For several years Game On Dude was a front-running institution. He didn't win them all, but the seven-year-old gelding could always be found out there on the lead in many of the biggest races over the last five races. No race brought him more success than the historic Santa Anita Handicap, and this year's edition was vintage Game On Dude. It seems only right that his last career victory would come in the Big Cap.

April - Will Take Charge in the Oaklawn Handicap

Will Take Charge is a beautiful steed, and was an admirable runner. He won a lot of important races the past two years, but none of them were easy. He almost always had to dig down deep and find one final acceleration of those long legs of his. We didn't know it at the time, but the Oaklawn Handicap turned out to be his final career win, and as usual, Will Take Charge needed everything in his arsenal to get to the wire first over a fiesty Revolutionary.

May - California Chrome in the Kentucky Derby

There’s a reason California Chrome has become America's darling. In fact, there are several reasons. The copper colored chestnut rose from modest beginnings to become a champion, and the crown jewel of his ascent to prominence was his stirring victory in the Run for the Roses. He was magnificent that sunny afternoon at Churchill Downs. On a personal note, this edition of the Derby will be one I always remember. It was the first time I was able to participate in the Derby walkover ... something that I wish every race fan could experience.

In a matchup of two of America’s best older horses, it was the Eastern stalwart who defended his home turf over the Californian based star in impressive and sublime fashion. It's no secret that Palace Malice has been a favorite of mine since early in his juvenile season, and out of all his wins, none satisfied me more than this flat mile performance. If there was any doubt to the quality of this race, those were well erased when Goldencents so impressively defended his Breeders' Cup Dirt Mile crown.

On his best day, Mr Speaker was one of America’s best young turf horses. He didn't always run his best, but he picked a great day to show up big time for the $1.25 million Belmont Derby. Adelaide proved after this race that he was one of the best three-year-old turf horses in all the world, but on this summer day at Belmont, Mr Speaker exploded up the rail, and rushed right by the Irish star. It looked like he was home free, but Adelaide, now very aware of the new leader, came back at him for a thrilling finish to the wire. After this, I cannot wait until the next Belmont Derby.

Where did Hardest Core come from? A virtual unknown to top flight racing, and with a story more out of a novel than real life, this rags to riches horse ran the race of his life in one of the biggest turf races in American racing. Even within the race, I wondered where he came from. It looked like the defending Breeders' Cup champion was going to win his battle with Side Glance, and that would be that. No sir. Hardest Core found another gear in mid-stretch, and within a matter of strides had raced his way into Arlington Million lore.

This was the race where we finally found out if one of the most exciting horses in America could overcome adversity. In his previous six wins, Shared Belief thrilled us with exhilerating wins in which he put away his competition well before the wire. This one was different. This was hard hat and lunch pail type of stuff. After going through the rough trip that he did, I still don't think he gets the credit for just how well the horse he edged, Fed Biz ran that day. Fed Biz ran big, and a troubled Shared Belief still beat him.

What more can you say about Wise Dan that hasn't been said already. Turning eight soon, the son of Wiseman's Ferry had some serious setbacks this year, but one thig remained constant ... his excellence. My favorite 2014 race of his this year was one of two that I was able to see in person. There were few races run in 2014 more gratifying than his final race of the year, the Shadwell Turf Mile. He was left with more to do late than usual, but the great gelding made it look easy. The atmosphere alone that chilly afternoon in horse country was worth the price of admission.

Bred in America, and trained in America for more than a year, my good friend Matt Shifman is adamant that Main Sequence should be considered an American, even though his early career took place in Europe. All the better, because what he did in the Breeders' Cup Turf, which is what he has done in all of his races this year, was fun to root for. I guess refusing to let the other horse get to the wire in a Grade 1 race is what Main Sequence is all about. What made the BC all the more exciting is the fact that he was doing it over one of the best turf horses in the world, in Flintshire.

The best juvenile race of the year by a long way in my opinion was the final Grade 1 for youngsters of the year. The battle tested Mr. Z was resolute. Firing Line, in the middle, looks to be a budding star, and the big, beautiful Dortmund on the outside excudes both potential and class. All three ran too good to lose on this afternoon at Los Alamitos, so it was a shame that only one could win. Dortmund earned it, though. I take back what I say ... It was the best juvenile race of many years.

Meet Brian Zipse
Brian has been a passionate fan of horse racing his entire life. Taken to the races at a very young age, he has been lucky enough to see all the greats in person from Secretariat, Forego, and Ruffian through Rachel Alexandra, Zenyatta, American Pharoah and Justify. Before coming to HRN, Brian displayed his love for the sport through the development of his horse racing website, which quickly became one of the most popular blogs in the game. His racing partnership venture, Derby Day Racing, invites more fans to experience the thrill of racehorse ownership.
The Editor of Horse Racing Nation from 2010-2017, Brian authored a daily column as Zipse at the Track, created the popular racing webcast HorseCenter, and added his editorial flare to the overall content of the website. Now a Senior Writer for HRN, Brian continues to contribute his thoughts on racing, as well as hosting HorseCenter. A big supporter of thoroughbred aftercare, he serves on the Board of The Exceller Fund.
Brian's work has also been published on several leading industry sites. He has consulted for leading contest site Derby Wars and is a Vox Populi committee member. He is a voter for racing's Hall of Fame, as well as a weekly NTRA poll voter.
A horse owner and graduate of DePaul University, Brian lives just outside of Louisville with his wife Candice and daughter Kendra.
ZATT's Star of the Week
Wit