My Favorite Memories from the Haskell Invitational 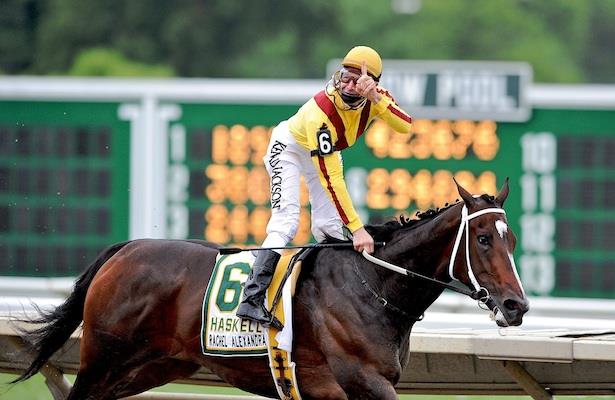 With the big, but not unexpected announcement that American Pharoah would indeed make Monmouth Park’s Grade 1 Haskell Invitational his first start since his historic Triple Crown clinching victory in the Belmont Stakes, I thought it would be a great time to look back at some of my favorite memories from a race that has always been one of my favorites. Monmouth Park has never hosted a Triple Crown champion before, so the 2015 Haskell is sure to be the most celebrated in its near half century history, but that’s not to say there haven’t been plenty of huge editions in the past. Let’s take a look...

1. Bet Twice (1987) - In the greatest of all editions of the Haskell, a trio of top quality three-year-olds hooked up in a fierce three-way battle. It featured the 6-5 favored local horse, and Belmont winner, Bet Twice, the 3-2 Kentucky Derby and Preakness winner, Alysheba, and the 2-1 streaking stakes winner from the Midwest, Lost Code. Bet Twice hooked Lost Code as the two ding-donged it down the entire Monmouth Park stretch, while Alysheba loomed large on the outside. In the end, the War at the Shore was won by Bet Twice, with the rallying Alysheba splitting him and Lost Code in a thrilling and tight finish. I don’t remember who the other horses in the field were, but I do remember that they were left a long way behind this fearsome threesome.

2. Rachel Alexandra (2009) - Already well into what could easily be called the greatest season of any three-year-old filly in history, Rachel Alexandra came to the Jersey Shore as the toast of racing. Monster winning margins in the Kentucky Oaks and Mother Goose sandwiched becoming the first female winner of the Preakness in better than 80 years. Those three special performances were her three most recent races coming in to the Haskell. Her performance at Monmouth Park might have been even better. The great filly won for fun, winning by a half-dozen lengths in near stakes record time, while leaving a solid cast of males in her wake, including the 2009 Three-year-old Male Champion, Summer Bird.

3. Forty Niner (1988) - The rivalry between a pair of Kentucky blue bloods did not begin or end in New Jersey, but it was in the Haskell where Forty Niner and Seeking The Gold first looked each other squarely in the eye to say hello. The two talented sons of Mr. Prospector hooked up on the Monmouth Park backstretch, and from there raced in near unison the rest of the way. More than once down the Monmouth Park stretch, I thought the Phipps runner was going to get by the favorite, but the previous year’s juvenile champion simply would not let him by. Forty Niner was as tough as nails, and Seeking the Gold was more than a worthy adversary, and their Haskell slobberknocker was unforgettable. Their Travers battle wasn’t bad either.

4. Five Star Flight  (1981) - In the first year since the name change from the Monmouth Invitational to the Haskell Invitational, my favorite current horse in training at the time got his big shot against the returning Juvenile Champion, Lord Avie. Both colts had local connections, and while it may not compare to some other editions of Monmouth’s signature race as far as national prominence, it carried a special interest to this young racefan. Truly a case of pace making the race, Five Star Flight controlled the race from the outset, and the powerful late run of the Dan Perlsweig trained champion never really threatened. Happily, it was my biggest bet (and cash) of my pre-teen years.

5. Point Given (2001) - As many quality young horses as there were that have competed in the Haskell over the years, there should be little doubt that this hulking son of Thunder Gulch was one of the best. In his first start since powerful victories in the Preakness and Belmont, Point Given was an overwhelming favorite in a field of six, but this one turned out to be by no means easy. Talented front runners Touch Tone and Burning Roma proved to be extremely game on the speed favoring Monmouth surface. Point Given had to dig down deep to eventually roll by late for a popular and hard earned half-length victory under Gary Stevens. At the time, the crowd of over 47,000 was a Monmouth Park record, and it also began the incredible run of Haskell wins by Bob Baffert.

6. Serena’s Song (1995) - Rachel Alexandra was not the only filly to thrill the local fans by beating the boys in the Haskell. 12 years earlier there was the iron filly from the powerful D. Wayne Lukas stable, Serena’s Song tackling a full field of males. No stranger to facing the boys, the experienced daughter of Rahy had already won the Spiral (Jim Beam Stakes) at Turfway Park in the spring. Sent off as the 3-2 favorite, and ridden by Gary Stevens, the speedy filly spurted out on the far turn as was her custom, and opened up early in the lane. Pyramid Peak made a spirited run at her, but there would be no catching Serena on this day, as she safely held sway for a ¾-length Haskell victory.

Those are just six of my favorites, but looking at the roll call of Haskell winners over the years, it's clear to see the race at the Jersey Shore competes with just about any three-year-old race out there. I invite you to tell me about your favorite edition(s) of the Haskell.