Mubtaahij could be Kentucky Derby bound for de Kock 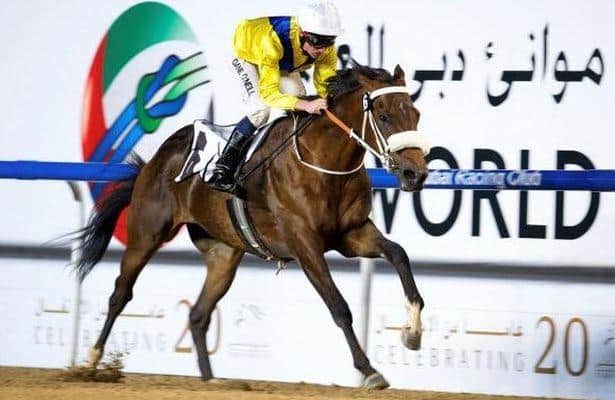 Maybe these Mike de Kock horses can run on dirt after all.

In fact, maybe one of them can run so well on dirt that he will make the trip all the way to the United States for the 2015 Kentucky Derby.

Nevermind that Mike de Kock pooh-poohed his horses chances on Meydan’s new dirt recently, or the fact that he has never before sent a horse to compete on the first Saturday of May. When a three-year-old shows big ability on dirt, every horseman begins to think about one of the world’s most prestigious races, and when Mubtaahij romped home an easy winner in the UAE 2,000 Guineas Trial for de Kock’s first Dubai World Cup Carnival win on the new main track last Thursday, the wheels began to turn for a possible trip to Louisville.

On his personal website, one of the world’s top trainers made the announcement that Mubtaahij beat the deadline for early nominations for the Kentucky Derby.

“Mubtaahij has shown enough promise to be considered a good UAE Derby candidate,” said de Kock. “On the strength of that and considering the [Kentucky Derby] entry deadline we decided to put his name down. This is one of the greatest races in the world. It’s a dream for all us, a first venture and we’ll see how things unfold."

This thought of entering new racing territory was prompted by Mubtaahij’s sharp five-length score over his stablemate, Ajwaad, with the well-regarded Maftool a little farther back in third. The victory was the second in as many starts on dirt, after breaking his maiden on New Year’s Eve. The two wins on dirt raised his record to 4-2-0-0, as the Irish-bred son of Dubawi finished out of the money in two starts on turf at Newmarket last fall.

The Guineas Trial victory sets the Sheikh Mohammed bin Khalifa Al Maktoum perfectly for a run at the most important three-year-old races in Dubai. The UAE 2,000 Guineas on February 12 will be the next target, with the big one, the $2 million UAE Derby set for World Cup night on March 28. De Kock is realistic about the road ahead for Mubtaahij.

“Mubtaahij will have to step up to the plate,” de Kock explained on his website. “We’ll have to test him against the strongest in Dubai to see if he has the mettle to compete in a race like the Kentucky Derby but racing is made of dreams and we’ve done our initial bit to make the journey possible. Mubtaahij will probably have to win the UAE Derby to have a good chance of securing a run.”

Whether it is Mubtaahij or not, the winner of this year’s UAE Derby is more likely than recent years to make the long trip to Churchill Downs. Not only is the UAE Derby now the only Kentucky Derby points race outside the United States, but it is also the prep race closest to the Kentucky Derby in distance at 1 3/16. Most importantly of all, though, the UAE Derby is now back on dirt.

Last year’s winner, Toast of New York proved his class with a narrow defeat in the Breeders’ Cup Classic, but in the spring his connections were not ready to test him against America’s top sophomores on dirt. With no surface change needed, there is good reason to believe that this year will be different, and wouldn’t it be interesting to see Michael de Kock with a legitimate Kentucky Derby contender? Mubtaahij could be the one.

3 Ky. Derby horses deal with short turnaround to Preakness
Baltimore There are different ways to attack the t...
x