Moonlight Cloud: This is what ‘Turn of Foot’ looks like 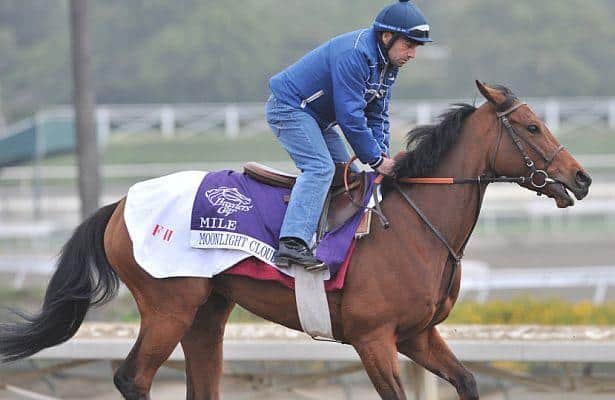 If you’ve ever heard the phrase ‘turn of foot’ when describing the events of a horse race, and wondered what exactly it meant, look no further than Moonlight Cloud’s scintillating stretch run in today’s Prix de la Foret at Longchamp. The Freddie Head trained five-year-old looked hopelessly beaten while still toiling in last with a quarter mile left to go in the seven furlong affair, when all of  sudden a magic button was pressed and the mare took of at warp speed. Not only did Moonlight Cloud catch her group 1 competition, but she did it so explosively quick, that she was able to she simply coast to the wire an easy winner.

Nearing the end of an excellent career, Head says this almost assuredly will be her penultimate career start. The good news for American racefans is that we may get to see the winner of 12 of 19 lifetime starts make her final career run at Santa Anita in the Breeders’ Cup Mile. It will either be Santa Anita or Hong Kong, according to her trainer. If Moonlight Cloud does indeed head west, she will try to avenge her worst career result. Last year, her normal late rush never quite kicked in and she finished near the back of a closely grouped pack, as Wise Dan scooted home to a victory that led to his Horse of the Year title.

Of course, normal late rush is relative. What we saw today from the mare owned and bred by American, George Strawbridge, was far from the norm; it was extraordinary.

Her rider, Thierry Jarnet, already winner of the Arc with Treve earlier in the card, must have wondered if the day was all a dream as Moonlight Cloud accelerated like a rocket ship past her competition.

Left in her massive wake was the Foret defending champion, Gordon Lord Byron. An excellent horse in his own right, Gordon Lord Byron had no answers for the mare’s amazing turn of foot, but just held on for second by a short neck over Garswood, with Dux Scholar in fourth. It was the second time Moonlight Cloud beat Gordon Lord Byron this year, and the fourth win in her four starts this season. Today’s win also marked the third consecutive group 1 victory after scores in the Maurice de Gheest and the Jacque Le Marois this summer.

Whether or not we get to see the 5-year-old daughter of Invincible Spirit one more time at Santa Anita, her performance today should be talked about, remembered, and savored. I’m not sure I will ever hear the phrase ‘turn of foot’ again without thinking of Moonlight Cloud every time.