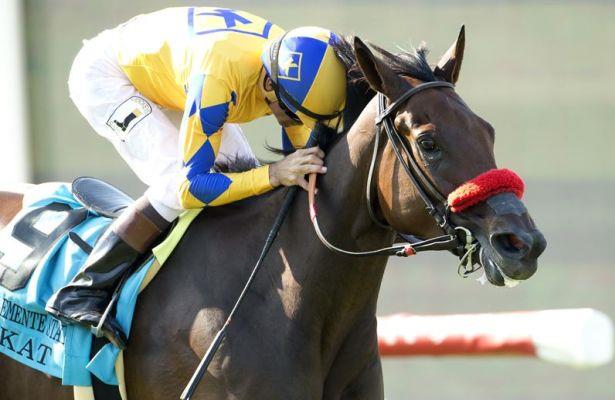 Another day, another pair of graded stakes wins. For America’s top young sire, the beat goes on. Uncle Mo was the leading first-crop sire of 2015 by a large margin, and this year, he is doing even better as a second-crop sire. Yesterday, on opposite coasts, the Coolmore America stallion delivered with graded stakes win at both Monmouth Park and Del Mar.

First it was Front Pocket Money, who toughed out victory in yesterday’s Grade 3 Jersey Shores Stakes. The ¾-length victory was no thing of beauty, but it did serve as further proof that his sire is turning out fast horses with class. Just a few hours later came what might be a breakout victory for a versatile young turf filly. Mokat is her name, and turf appears to be her game. Making her first start since the Kentucky Oaks, under Kent Desormeaux she turned what looked like a wide open race on paper, into an impressive runaway in the Grade 3 San Clemente at Del Mar.

A champion race horse himself, the list of nice horses sired by the eight-year-old son of Indian Charlie already is an impressive one:

Nyquist – A champion and a Kentucky Derby winner already, the best juvenile of 2015 is on target for the Grade 1 Haskell Invitational on Sunday. If he can win for the ninth time in ten starts, it would move him ever closer to his second Eclipse Award as the best of his crop.

Mo Tom – Despite an unlucky streak that extended into the Kentucky Derby, the talented stretch runner already has three stakes wins, including the Ohio Derby in his last start. He now has the Grade 1 Travers Stakes on his dance card.

Outwork – Just like his sire, this son of Uncle Mo is owned by Mike Repole, trained by Todd Pletcher, and is an absolute stunner. Those looks were manifested with a victory in the Grade 1 Wood Memorial in only his fourth career start. He’s currently getting some rest, but will be one to watch upon his return.

Mokat – Second in the Grade 1 Santa Anita Oaks behind Songbird on dirt earlier in the year, the Richard Baltas trained filly looks to be even better on the grass. Yesterday’s win was both fast and explosive.

Gomo – Missed the Kentucky Oaks due to a virus, and she’s only made one start so far in 2016, but she was a smashing winner of the Grade 1 Alcibiades at Keeneland in her final juvenile start.

Uncle Lino – Currently on the shelf after finishing seventh in the Preakness, this California based stakes winner proved his toughness with several good performances against graded stakes competition, including a solid third in the Santa Anita Derby.

Front Pocket Money – The Steve Asmussen trained gelding may have been only the second most impressive offspring of Uncle Mo to win a stakes yesterday, but the graded win came in only his fifth lifetime start. He looks like a sprinter to keep an eye on.

Forevamo – As many good races as this Al Stall-trainee has run, it’s hard to believe he is not a graded stakes winner yet. Seconds in the Risen Star, behind Gun Runner, and in the Pat Day Mile are two of his career highlights to this point.

Thrilled – A route of ground looks to be right up the alley for this filly. She turned away the classy Family Tree in the Plum Pretty Stakes, and has finished second in three other stakes races around two-turns.

Mo d’Amour – The Busher winner ran a very good race to be fifth in the Kentucky Oaks. She takes another shot against the big girls in today’s Coaching Club American Oaks.

Abiding Star – The Parx Derby winner could not stick with the top one on this list in the Preakness, but he has already won five times this year, including the Private Terms Stakes.

Clipthecouponannie – An undefeated filly for Repole/Pletcher, she has not raced since a brave win in the Franklin Square Stakes back in February.

Laoban – Yes, he is still a maiden, but considering the competition he has competed against, and held his own, I thought he deserved mention on this list.

Getting back to Mokat, Uncle Mo’s most recent graded stakes winner, the three-year-old filly looked like a million bucks yesterday at Del Mar. While she is certainly capable on the dirt, yesterday’s result would seem to point to a bright future on the lawn. Look for her to be in with a big shot on Pacific Classic day in the Grade 1 Del Mar Oaks. Whether it be one-turn or two, dirt or turf, for Uncle Mo, the beat most definitely goes on.