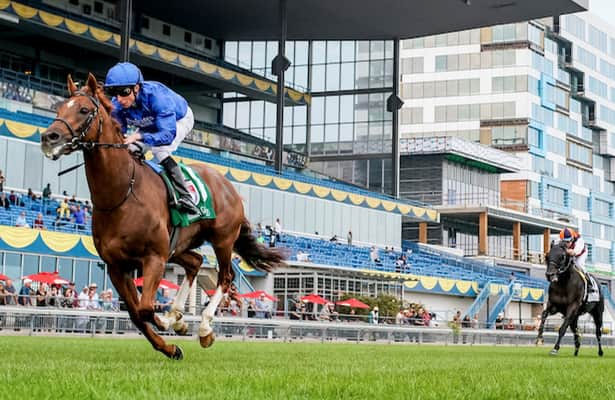 On a day when two of his stablemates ran absolutely huge to win big races for fun, Modern Games still managed to shine the spotlight on himself with an awesome performance in Saturday’s Grade 1 Woodbine Mile.

Already well known to American race fans for a bizarre set of circumstances in last fall’s Breeders’ Cup Juvenile Turf, where he won nicely while running for purse money only, the son of Dubawi has emerged this year as a bigger and stronger version of the impressive 2-year-old we saw last year at Del Mar.

I knew he was good coming in, but I feel comfortable saying that if there has been a better turf horse to run in North America this year, I have not seen him.

Saturday’s display in the million-dollar race was that good. Trained by Charlie Appleby, the Godolphin homebred was well back early in the Woodbine Mile and between horses. It appeared to be a less than ideal spot for the heavy favorite and his Norwegian-born, English-based rider William Buick.

Screaming out for room on the turn, Modern Games burst through a hole as he swung outside in the 11-horse field and then was pushed even farther outside by the other European in the field, Finest Sound.

It was not the easiest trip to find clear sailing, but when he did Modern Games showed off his superiority for all to see on his way to a 5 1/4-length score.

With a turn of foot reminiscent of the great Goldikova, Modern Games sprinted to his sixth victory in 11 career starts while completing the mile on firm turf in racehorse time of 1:32.77. In so doing, the 3-year-old chestnut announced himself as strictly the one to beat in the $2 million Breeders’ Cup Mile (G1) in seven weeks at Keeneland.

Considering what we saw Saturday, it’s somewhat hard to believe this horse came in off a three-race losing streak. Two of those losses, however, came at distances other than a mile.

The only horse to ever defeat Modern Games at a mile is the world’s best turf horse, Baaeed. And that second-place finish to Europe’s older undefeated superstar in the Qatar Sussex Stakes (G1) at Goodwood in England pointed out just how good Modern Games was becoming.

As another point of reference for the upcoming big test at Keeneland, the horse who ran a well-beaten second Saturday, Ivar, has been quite competitive in the last two editions of the Breeders' Cup Mile.

Counting his win earlier this season in the French classic, the Poule d'Essai des Poulains (G1) at Longchamp, Modern Games now has won five of his last eight starts, with the last six coming in Grade 1 company.

He also continued the amazing run his trainer is on bringing top turf horses to North America.

Appleby, a 47-year-old Englishman, added three important victories to his raiding total, with Mysterious Night and Nations Pride both scoring with dominant performances Saturday in the Summer Stakes (G1) at Woodbine and the $1 million Jockey Club Derby (G3) at Aqueduct, respectively.

As good as his trainer and stablemates were Saturday, though, Modern Games was the star. The classy Dubawi colt built on his excellent performance last time against Baaeed to completely outclass a solid field in the Woodbine Mile with an explosive display.

Remembered last year as a Breeders’ Cup winner whom handicappers could not bet, he has become much more this year. The Breeders’ Cup awaits again, this time against older horses in the Mile at Keeneland. If he runs like he has in his last two, no horse will beat him.