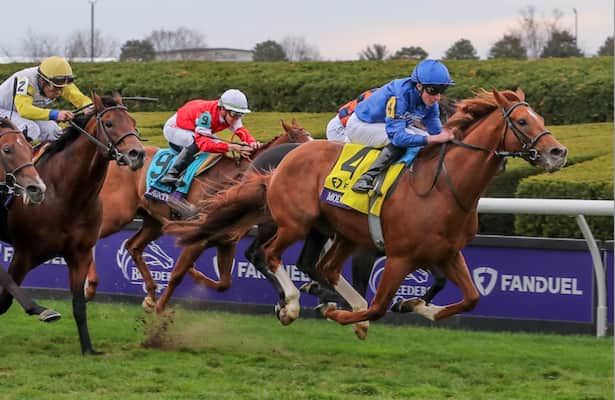 The only thing more dominating over the weekend than the showing of European runners on the turf was Flightline’s romp in the Breeders' Cup Classic.

Led by Modern Games and Rebel’s Romance, the internationals took the home team to task, winning six of the seven turf races run during the Breeders' Cup at Keeneland.

After an impressive rally by Tuesday to run down In Italian in the Breeders’ Cup Filly & Mare Turf gave the European shippers their fourth win, it was time for the Charlie Appleby-trained pair to take center stage. The two Godolphin homebred sons of Dubawi would not disappoint.

North American fans were well aware of Modern Games before Saturday's Breeders’ Cup Mile because he had come across the pond twice before. Impressive victories in last year’s Breeders’ Cup Juvenile Turf and the Woodbine Mile (G1) in September helped make the 3-year-old chestnut a clear favorite against a solid international field.

Biding his time in eighth while between horses and well off the early fractions of 46.81 seconds and 1:10.96 set down by leader Smooth as Strait, Modern Games waited for rider William Buick to call on him to run.

When asked for speed on the far turn, Modern Games found room to sail and swung eight wide for the stretch run. From there, he displayed his dominance with a familiar burst of speed that carried him to a 1 1/4-length victory over the Canadian Shirl's Speight and England’s Kinross in a final time of 1:33.96.

His third important and impressive victory in North America without a loss raised his career bankroll to $3,176,716 with a record of 13: 7-3-1.

A classic winner in France and twice second in huge Group 1 mile races in England this year, Modern Games has proven himself one of the best milers in the world. His ability to travel and excel in American-style racing makes him an absolute star in the U.S.

He's by no stretch a big horse but having developed into a mature racehorse over the last several months, look for Modern Games to come back to America for a run at a third consecutive Breeders’ Cup victory next year at Santa Anita.

As for his older stablemate, Rebel's Romance might have been even more impressive in winning the $4 million Breeders’ Cup Turf.

Having begun his career by winning two starts on all-weather surfaces in England and then toying on dirt for several starts, Rebel’s Romance has become a star on the turf.

Clearly a horse who relishes every yard of a mile and a half, he came to the U.S. for the second time off four consecutive wins. The first two came in England, while the last two were Group 1 wins in Germany.

His previous trip to the U.S. ended with a hind leg infection, which forced him to miss last year’s Belmont Stakes. But this visit was decidedly different.

After breaking a step slow, rider James Doyle let the 4-year-old gelding settle near the back of the pack early. In a trip that was very similar to what Modern Games had a few races earlier, Rebel’s Romance was ridden patiently and confidently before swinging out wide for the stretch drive.

Sprinting down the entire lane, Rebel’s Romance and his devastating late run proved much the best in the middle of the track. In rolling to a 2 1/4-length victory, he finished the 1 1/2 miles on the firm Keeneland turf in a course-record time of 2:26.35.

Only a typically strong effort by the mare War Like Goddess to finish third prevented the Europeans from sweeping the top five spots in the Breeders’ Cup Turf.

This year, perhaps more than ever, it is clear that the European runners are a full cut above the Americans on the grass. Flightline is the world’s best horse, but on the turf, it’s all Europe.

Modern Games and Rebel’s Romance are two of the best, and with both of the Godolphin stars coming back in 2023, it could be more of the same next November at Santa Anita.