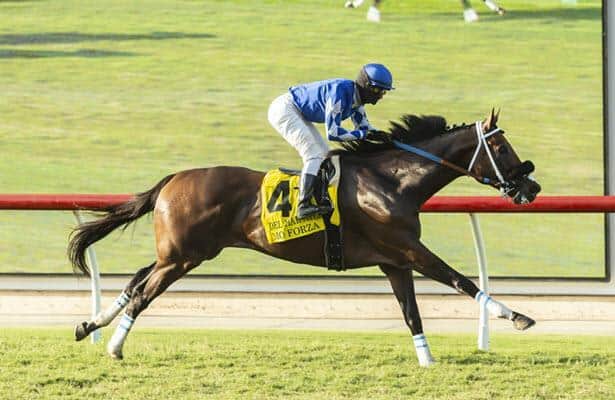 It seems like old times. One year ago, Mo Forza returned to rave reviews when he ransacked his competition in the Grade 2 Del Mar Mile. It was a most impressive comeback to the races after being away for seven months.

Flash forward to another summer at Del Mar, and we once again will welcome back the talented turfer as he embarks on a brand new run at the Breeders' Cup Mile.

A five-time stakes winner, Mo Forza is primed and ready to make his long awaited return to the races in Saturday’s Del Mar Mile, this time after a break of better than 10 months.

Trained by Peter Miller and owned by Bardy Farm and OG Boss, the bay son of Uncle Mo would be one of the hottest horses in the country if not for the layoffs.

A top candidate for the 2020 Breeders’ Cup Mile until a soft-tissue injury put him back on the shelf, Mo Forza has scored six times in his last seven starts, dating back to his maiden breaker in September 2019.

After that initial victory over the Santa Anita turf course, he promptly rattled off wins in the Twilight Derby (G2), Hollywood Derby (G1) and Mathis Brothers Mile (G2) to close out his 3-year-old season.

A failed trip to Florida going 1 3/16 in the Pegasus World Cup Turf (G1) in January 2020 prompted a freshening. When he returned, he looked better than ever. His Del Mar Mile victory reaffirmed the belief that he was one of America’s top milers.

He certainly appeared to be one of the main contenders for the World Championships when six weeks later he moved over to Santa Anita for the the City of Hope Mile (G2). He was once again was visually impressive in his dominance.

Unfortunately for fans of racing – and America’s chances in last year’s Breeders’ Cup at Keeneland – he has not raced since. Happily, the wait to see Mo Forza back on the turf is nearly over.

Out of the unraced Unusual Heat mare Inflamed, who is a full sister to stakes winners Burns and Burnside, Mo Forza was a horse who liked to be near the pace early in his career. As we saw last summer and fall, though, he became more relaxed early as an experienced runner. He was more than happy to wait for the turn for home to unleash his potent turn of foot.

When we last saw him, Mo Forza used that devastating turn of foot to come home in just over 11 seconds for the final furlong of the City of Hope Mile. His competition was left with no chance, as he completed his impressive mile win in 1:32.09, just .4 seconds off the course record.

Working well for Saturday’s return, Mo Forza, with leading rider Flavien Prat in the saddle, will face a tougher field than he saw last year. Smooth Like Strait, for one, should make his return to the races a bigger challenge than it was for his last return.

On the other hand, if the time off did him good and he comes back in a similar fashion as he did in 2020, a more mature version of the turf star we saw last year could be an absolute juggernaut.

You never know for sure what you are going to get after a long layoff, but generally it seems top turf horses are more dependable when they come back, especially at an age like 5.

The good news is that Mo Forza is back. He is one of America’s best turf horses, and with this year’s world championships being hosted by Del Mar, a version similar to what we saw a year ago moves him right to the head of the list for the Breeders’ Cup Mile.