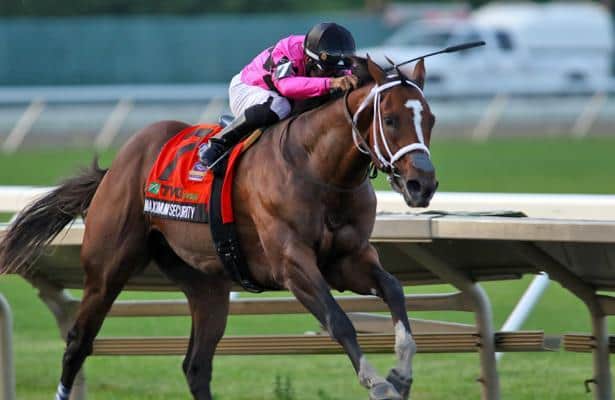 In what's to be his final race of a wild 3-year-old season, Maximum Security remains on target for the Grade 1, $750,000 Cigar Mile on Dec. 7 at Aqueduct Racetrack.

And what a difference a year makes. At the close of 2018, the son of New Year's Day made his debut Gulfstream Park with a $16,000 tag, far from the high end of maiden claiming company.

Now as we close in on the end of 2019, the Gary and Mary West homebred looks primed to be named a champion as well as one of the main players in January's $9 million Pegasus World Cup (G1).

He will likely be the Eclipse Award winner as champion 3-year-old male on the strength of a season in which only one horse has finished ahead of him in his seven starts. That, coupled with two Breeders' Cup losses by his closest competition, Code of Honor and Omaha Beach, has Maximum Security on the brink of a title.

The Cigar Mile will mark his eighth and final start of the season, and a victory in New York's last big race of the year would all but wrap up divisional honors.

Maximum Security's primary competition in the Cigar Mile could come from another pair of grade 1 winning 3-year-olds.

Coming off a sharp victory in the Breeders' Cup Dirt Mile, in which he ended the winning streak of Omaha Beach, Spun to Run is the hot horse of the division. The winner of 5-of-11 lifetime has put it all together in recent starts, and should start a strong second choice behind Maximum Security.

Not to be forgotten on the list of Cigar Mile probables is Roadster. Seemingly holding limitless potential after a clear cut victory over Game Winner in the Santa Anita Derby (G1), his upward mobility was stunted in a sloppy Kentucky Derby. He recently returned from a layoff, though, with a solid prep for trainer Bob Baffert and the Cigar Mile.

Speaking of the Kentucky Derby, America's most prestigious race saw the unthinkable happen this year, when for the first time ever, the winner was disqualified for in-race interference.

Should his number have been taken down? The debate on the decision to disqualify Maximum Security from the roses has been waged ad nauseum. Just last Friday, a Kentucky judge ruled that stewards' decision cannot be changed by a court, throwing out the lawsuit filed by Maximum Security's owners to overturn the disqualification.

Whichever side of the fence your sensibilities favor, Country House is the official winner of the 2019 Kentucky Derby. But it takes little away from everything that the Jason Servis-trained Maximum Security has accomplished following modest beginnings. He's also been a lightning rod for controversy.

Despite a decisive victory in the Florida Derby, with Code of Honor a well-beaten third, many dismissed the speedy, reformed claimer as a serious threat to win the ten furlong Kentucky Derby.

On a sloppy track at Churchill Downs, he proved them wrong, holding off all comers in a wild stretch run. It was a brave performance, and one that would have kept his perfect record in tact -- would have, of course, if not for the controversial disqualification.

For Maximum Security, it's been a bit of a strange ride ever since.

While the Kentucky Derby controversy raged, he was held out of the final two legs of the Triple Crown. A bizarre $5 million challenge offer was made to his Derby competition by owner Gary West, clearly still reeling from the heartbreak.

Returning at Monmouth Park in a prep for the Haskell Invitational (G1), Maximum Security was shocked by the aptly named King for a Day. But his first actual defeat was quickly forgotten when he came back to bravely win the Haskell on a sweltering day on the Jersey Shore.

With Maximum Security back on top of the division, the decision was made to skip the Travers and wait for the Pennsylvania Derby. It was an understandable choice, but it also meant that the horse who finished first on the first Saturday in May had skipped the Preakness, Belmont, and the Mid-Summer Derby.

The Pennsylvania Derby would have been a good test, but this soap opera was far from over. A sudden and severe case of colic struck Maximum Security the week of the race, and he could not run in the rich affair.

It also meant that he would not be ready for the Breeders' Cup, adding to the list of big races he's missed this year. His fortunes took a turn for the good, though, when he made it to the races on Oct. 26 for the Bold Ruler (G3) at Belmont Park.

A sharp victory going seven furlongs against older reminded us all of the talent and heart Maximum Security still has. Now it's on to the Cigar Mile in less than three weeks.

The story of Maximum Security in 2019 is not over, and best of all his saga will continue in 2020. Will he be the best horse in the nation, or will controversy and the ups and downs continue to follow him? Stay tuned.