Zipse: Mandaloun is poised for a big 4-year-old season 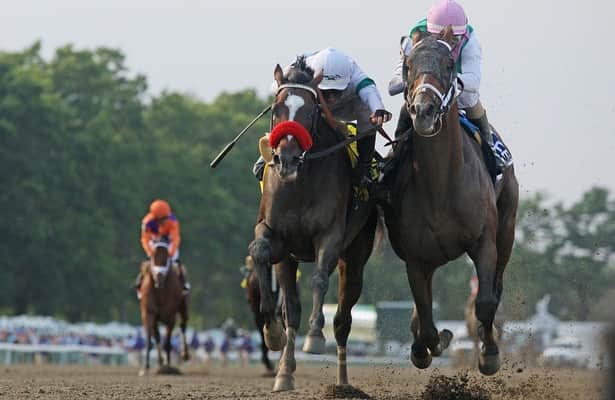 In most years, winning the Kentucky Derby and the Haskell would have you squarely in the race for champion 3-year-old. Of course, 2021 was not most years, and Mandaloun did not actually finish first in either the Run for the Roses or New Jersey’s signature race.

On the first Saturday in May, the Juddmonte Farm homebred ran a huge race and looked poised to strike the lead and go on to victory, but he was never able to get by the game Medina Spirit.

His excellent second-place finish also appeared set to be elevated to first when the Baffert runner failed a post-race drug test. But now a messy matter for the courts, a final decision has dragged on painfully long, and we still do not know whether Mandaloun will be named the official winner of the 2021 Kentucky Derby.

The $1 million Haskell (G1) was simpler but also messy. Down on the rail nearly the entire race, the physically impressive son of Into Mischief deftly moved off the rail to zoom by the tiring Following Sea before engaging Midnight Bourbon and Hot Rod Charlie in a wild stretch battle.

Three soon became two, as Midnight Bourbon looked to be beaten between Mandaloun to his inside and Hot Rod Charlie on the outside but was checked hard and fell to his knees. The spill threw rider Paco Lopez to an ugly tumble on the Monmouth Park main track. Thankfully, both horse and rider turned out to be not seriously injured in the incident.

It was a dogged battle from there, as the classy Hot Rod Charlie looked to have the momentum. But Mandaloun proved to be tougher than a $2 steak. Coming back at his rival on the rail, the Brad Cox-trained second choice almost overtook the favorite but lost the photo by a teensy nose.

The stewards reversed the decision, though, citing Hot Rod Charlie as the cause of the Midnight Bourbon trouble, and Mandaloun was awarded victory in the Grade 1 race.

And we have not seen Mandaloun since the July 17 donnybrook on the Jersey Shore. Saying that his charge needed a break, Brad Cox gave the talented runner plenty of time off to rest and mature.

While he was away, Essential Quality, Medina Spirit, Life Is Good and Hot Rod Charlie continued to make headlines and Mandaloun became the forgotten one of a very strong 3-year-old crop.

Six months later and rave reviews of the horse’s readiness to be a top-notch 4-year-old are numerous in coming out of New Orleans and the Cox camp.

Either a three-time stakes winner last year – or a four-time stakes winner with the Kentucky Derby, pending the final court decision – Mandaloun was one of the best sophomores in the nation last year, and he looks to be poised to be even better at 4.

His 2022 season will begin in the Louisiana Stakes (G3) as part of a big card of stakes races at Fair Grounds on Saturday. Standing in the way of a return win in the Louisiana will be six other older males, including a very familiar rival in Midnight Bourbon.

Mandaloun has raced only eight times in his career and already has faced Midnight Bourbon five times. Their sixth meeting in his last seven races is set for Saturday, and although the Juddmonte runner has been off for six months, his rival kept on racing through late November, finishing second in the Travers (G1) and Pennsylvania Derby (G1) and third against older horses in the Clark Handicap (G1) in his last start.

The rivalry began with split decisions early last year at Fair Grounds, with Midnight Bourbon taking the Lecomte (G3) and Mandaloun winning the Risen Star (G2). So the score currently stands at 3-2 in favor of Mandaloun.

Should he come back running on Saturday, his camp plans to send Mandaloun overseas for the riches of the $20 million Saudi Cup on Feb. 26. It’s a race that, not surprisingly, Midnight Bourbon also has his sights on.

Win or lose in the Louisiana, it will be good to have Mandaloun back to the races. Still a lightly raced runner, there is good reason to believe that he can become something even better than what we saw in 2021. And having run as well as he did in races such as the Kentucky Derby and the Haskell, that is saying something.