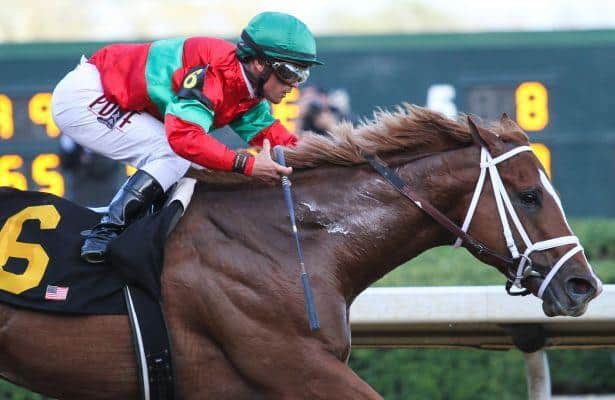 Unbeaten and untested after two romping wins in South Florida sprints, Malagacy came to Oaklawn Park with questions to answer. Mission accomplished, as the son of Shackleford scored an impressive two-length victory today in the $900,000 Rebel Stakes. In the process he gained 50 qualifying points for a starting spot in the 2017 Kentucky Derby.

Well backed at 3-1 despite making his first try against stakes company, at two-turns, and away from Gulfstream Park, Malagacy broke well from his middle post position, under rider Javier Castellano. He quickly gained a perfect stalking position right behind the early speed of Uncontested.

The field of 11 moved into the Oaklawn Park backstretch, with a host of challengers just behind the Todd Pletcher trained Malagacy, who held his position of second. Uncontested maintained a working margin through opening splits of :23.03 and :47.04. With horses jockeying for position close behind, Castellano and Malagacy tracked Uncontested into the far turn.

Waiting to make their move at the top of the lane, Malagacy quickly joined the early leader, and grabbed the lead. He then braced for the challengers from behind. The first to look threatening was Untrapped, who rallied boldly from in-between horses. It briefly looked like that one was moving best, but the determined Malagacy had other ideas.

With Castellano asking for everything the unbeaten colt had, he edged away from his main challenger, and sprinted to the wire a clear winner. Castellano praised the winner after the race, and said he believes Malagacy can handle things as the distance continue to increase.

“He doesn’t do anything wrong, very impressive the way he did it today," said Castellano. "I rode with a lot of confidence. He’s such a great horse. Every single race he’s been impressive. Todd (Pletcher), he did a great job with the horse, going long and stepping up in class and he still showed up and won the race. I give all the credit to Mr. Pletcher. The way he did it today, very impressive, I think there’s no question he likes to go far. He’s well bred, and he has a good trainer and is a joy to ride.”

The maiden Sonneteer, ignored at 112-1, scooted up the rail and edged out Untrapped and Petrov for second place in a three-way photo. Race favorite, American Anthem never fired today for trainer Bob Baffert, and checked in tenth.

Owned by Sumaya U.S. Stable, Malagacy is from the first crop of the Preakness winner, Shackleford, and out of a Dehere mare, Classiest Gem. With the victory, the  $190,000 two-year-old purchase raised his record to a perfect three-for-three. In his first two victories, Malagacy had won by a combined margin of 22 lengths in a maiden special weight and an optional claimer at Gulfstream Park. He now has $586,800 in the bank, with $540,000 of that total coming from his big win today.

After the race, the winning trainer talked about his charge's qualities and pointed to a likely next start back in Hot Springs.

“The great thing he's got going for him is a beautiful disposition and he's very ratable and he's fast," remarked Pletcher. "That's a great combination to have. The Arkansas Derby would be the logical next step. We'll bring him home tomorrow to Palm Beach Downs and see how he bounces out of it. The Arkansas Derby timing wise would be good, and getting a mile-and-an-eighth race under his belt would also be beneficial. That would be Plan A, but in this business we all know that sometimes you have to call some audibles. Right now that's what the thinking is.”