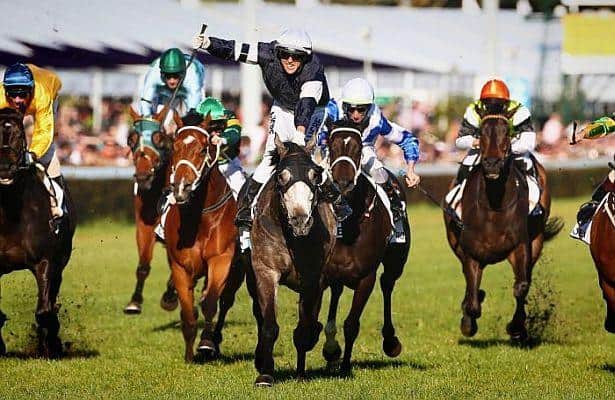 Americans love to complain. “My soup’s too hot.” “My soup’s too cold.” “Someone’s been eating my soup.”  A nation once known for its rugged, can-do attitude, has become a country of whiners. Case in point, our Kentucky Derby. Instead of embracing what could well be the greatest race in the world, all I hear are complaints.

“The field size is too big.” “20 horses is just too many in one race.” “It’s not fair.” “Someone is going to get hurt.” “Too many poor trips caused by the 20-horse field.” “I can’t handicap a ten-horse field, let alone double that.”

C’mon, America … get a grip. The Derby is as good as it gets, and the cavalry charge, double gate spectacle makes it all that more uniquely special. A 12-horse field in the Kentucky Derby? No thanks.

You know what got me thinking of all this almost six months removed from last year’s, and more than that for next year’s Derby? It was staying up to the wee hours of the morning to watch the first of three huge gigantic races of springtime in Australia. And I’m glad I did.

Today’s Caulfield Cup was positively glorious. A cornucopia of sights and sounds for the senses, this year’s edition featured a brigade of colorfully silked riders on talented horseflesh lining up 400 meters from the wire. After well more than a mile of generally uneventful action, it all came down to a mad dash to the wire, over the emerald green turf. The whole scene put a smile on my face as I watched on my Asus laptop computer screen.

And you know what? Everytime I watch one of these big races from Australia, the Melbourne Cup, the Cox Plate, or the Caulfield Cup, the field size is large. Kentucky Derby kind of large. Yet, I don’t hear the complaints from the fans about it to being too many. Even the connections don’t seem as quick to the draw with an excuse of tough trips and bad beats due to just too many horses. It’s refreshing. Did I mention how beautiful these races are to watch?

Is the field size of the Kentucky Derby too large? No. Just look to the Australians, my friends.

As for my selection in the Caulfield Cup, Jet Away, he ran a big race, but moved way too early for my liking, and faded to finish an uncashable fourth … can I get a little cheese with this whine?

Meet Brian Zipse
Brian has been a passionate fan of horse racing his entire life. Taken to the races at a very young age, he has been lucky enough to see all the greats in person from Secretariat, Forego, and Ruffian through Rachel Alexandra, Zenyatta, American Pharoah and Justify. Before coming to HRN, Brian displayed his love for the sport through the development of his horse racing website, which quickly became one of the most popular blogs in the game. His racing partnership venture, Derby Day Racing, invites more fans to experience the thrill of racehorse ownership.
The Editor of Horse Racing Nation from 2010-2017, Brian authored a daily column as Zipse at the Track, created the popular racing webcast HorseCenter, and added his editorial flare to the overall content of the website. Now a Senior Writer for HRN, Brian continues to contribute his thoughts on racing, as well as hosting HorseCenter. A big supporter of thoroughbred aftercare, he serves on the Board of The Exceller Fund.
Brian's work has also been published on several leading industry sites. He has consulted for leading contest site Derby Wars and is a Vox Populi committee member. He is a voter for racing's Hall of Fame, as well as a weekly NTRA poll voter.
A horse owner and graduate of DePaul University, Brian lives just outside of Louisville with his wife Candice and daughter Kendra.
ZATT's Star of the Week
Olympiad

Analysis: Tiz the Bomb could be a major player in Belmont Derby
Tiz the Bomb leads the small group of former Kentu...
x